We have no alternative but peace, President Anastasiades tells Akinci 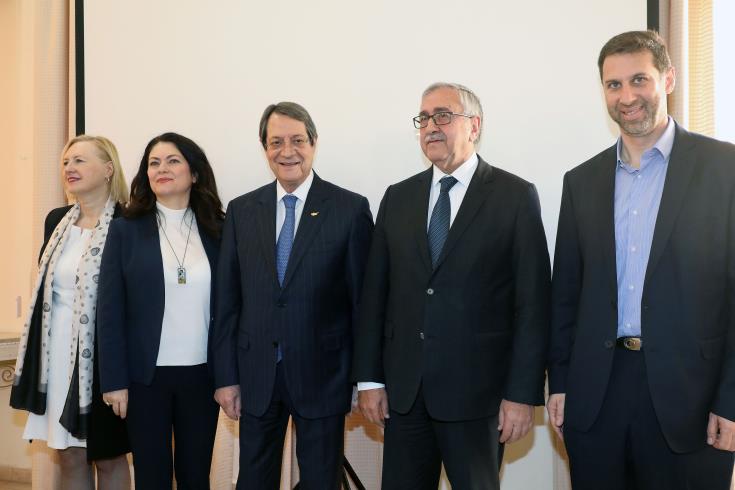 The status quo in Cyprus is not the choice of Cypriots, President Nicos Anastasiades said on Monday, adding that “there is no other choice or alternative but to bring peace to our land” while addressing Turkish Cypriot leader Mustafa Akinci.

President Anastasiades attended this morning the ‘Imagine’ Head Teachers Conference, organised by the bicommunal Technical Committee on Education, in Ledra Palace, in the presence of Akinci, the UN Secretary-General’s Special Representative Elizabeth Spehar, the heads of the Technical Committee, as well as Greek Cypriot and Turkish Cypriot head teachers.

In his address, President Anastasiades referred to the peaceful coexistence of Greek Cypriots and Turkish Cypriots, he said however that the interventions by third parties “without excluding nobody” led to the problems that followed. “What we are looking for is Cypriots, Greek Cypriots and Turkish Cypriots, to take on the fate of this country by creating the conditions for peaceful coexistence” and their future, the President added.

He also said that his presence in the conference, together with Akinci, aims at send a message of support for the actions and initiatives of the Technical Committee for Education.

Speaking about the status quo on the island, President Anastasiades said that it does not allow fellow compatriots to enjoy the rights, freedoms and the level of prosperity other EU citizens enjoy. We acknowledge the difficulties but with respect to each other’s sensitivities and concerns and through mutual respect, we ought to merge what we consider to be the joint interests of Cypriots, he added.

The only way to achieve this is by creating a viable and functioning bicommunal federal state, securing our joint future in a united Cyprus, member of the EU, without dependencies on any third parties.

The President called on teachers to continue educating critically thinking and active citizens who will search for creative solutions to the challenges that may arise in the future.

He also welcomed the initiatives undertaken by the Technical Committee, particularly through the ‘Imagine’ programme that brought together more than 4,000 pupils and 650 teaches in the last 2,5 years.

He also pointed to educational activities in schools against racism and in order to develop a culture of peace. Among others, the President said that pupils are being taught Turkish Cypriot literary texts translated into Greek, while Turkish lessons are optional for high school pupils.

Before attending the conference, President Anastasiades made a statement calling for respect towards Cyprus, while saying that the country can not be a vassal of any third country.

He said that without disregarding the ethnic origin, the conference aims to cultivate a culture of peaceful coexistence, “an important element in the framework of the efforts we are making for peaceful coexistence if and when conditions allow us to work as Cypriots in order to solve the Cyprus problem as an independent country.”

These are steps to the right direction, but they are not enough for a Cyprus solution, the President added and called for respect towards Cyprus.

In his address, the Turkish Cypriot leader Mustafa Akinci referred to the importance of cultivating a culture of peace in Cyprus and highlighted the value of education.

Speaking through an interpreter, Akinci said that people may have different views and goals, but it is important to have a culture of peace in order to address these issues.

He also noted the importance of dialogue while trying to solve differences and referred to the need to respect equality, multiple identities and pluralism. All these elements are essential for the federal government to work, Akinci added.

He said that the decision with President Anastasiades to form the bicommunal technical Committee back in 2015 was “the most important decision we took with my friend Nicos.”

He noted finally that the Technical Committee has a long way to go and referred to the curricula and the instruction of Greek and Turkish in the schools. We need to encourage these initiatives in order to see them implemented and have peace, Akinci concluded.

The conference was also addressed by the Heads of the Technical Committee for Education, Michalinos Zembylas and Meltem Onurkan Samani, while professor Tony Gallagher from Queen’s University in Northern Ireland delivered a speech about the transformational leadership for peace.