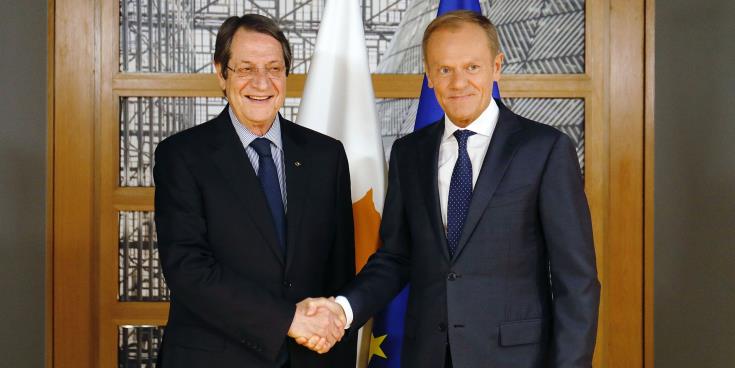 Cyprus President, Nicos Anastasiades, has thanked European Council President Donald Tusk for his active support amidst actions by Turkey that violate the sovereign rights of Cyprus, stressing that Cyprus counts on the support of all EU member states during the forthcoming EU Summit, in condemning these illegal actions.

Following a post on Twitter by Tusk who noted that “Turkey’s continued illegal drilling activities only undermine good neighbourly relations between the EU and Turkey” and that “the EU stands united behind Cyprus”, Anastasiades said in a Twitter post: “Thank you @eucopresident for your active support amidst actions that violate the sovereign rights of #Cyprus, an EU member-state, and test our values of upholding international law and the need to abide with the principle of maintaining and promoting good neighbourly relations.”

Moreover he noted that “these are the fundamental concepts that any state aspiring to become a member of our EU family should uphold and respect. We count on the support of all EU member-states during the EU Summit to take place next week in condemning these illegal actions.”

By In Cyprus
Previous articleCustoms seize tobacco, clothing, other items in September
Next articleCyprus and Egypt hold first technical meeting on pharmaceutical cooperation