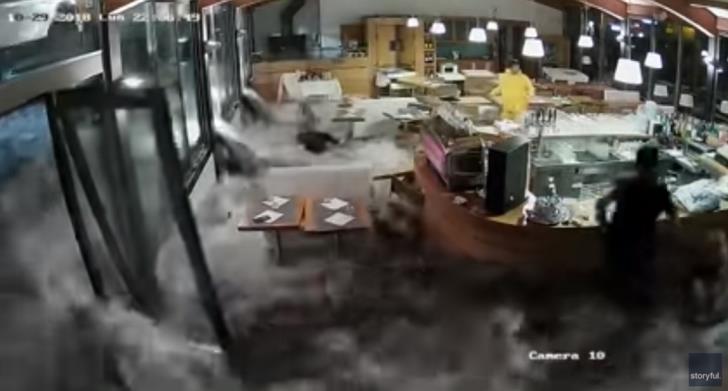 A large wave crashed through the glass exterior of a restaurant in Genoa, northern Italy as storms continue to batter the country in severe weather conditions that have claimed at least 29 lives so far.

The restaurant surveillance footage shows five members of staff washing the floor and tidying up at the end of their shift on October 29 when heavy wind and rain starts battering the restaurant’s exterior.

When they see the large wave approaching some workers try to secure the windows before water crashes through, flooding the room.

But the doors immediately give way and the waves sweep one of the employees across the dining room while another leaps onto the bar.

According to the Daily Mail, the restaurant proprietor was hospitalized after she was hurt by shattered glass.

Heavy rains and gale-force winds have been battering Italy for several days, uprooting millions of trees and cutting off villages and roads.

The overall death toll from the storms sweeping Italy is 29, officials said on Sunday.