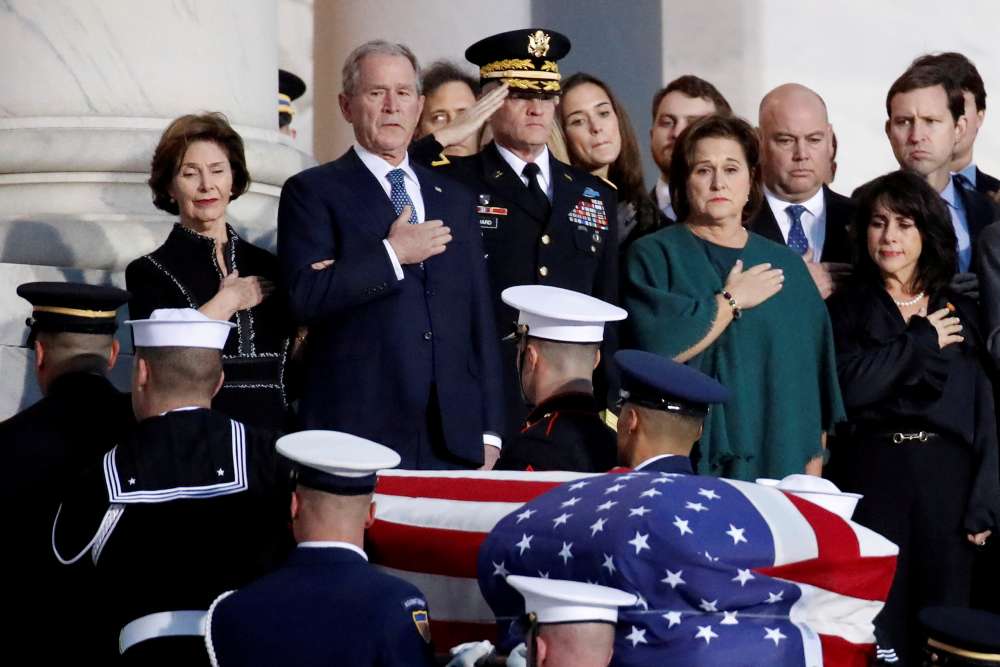 Washington’s political elite paid tribute to former U.S. President George H.W. Bush as his body lay in state in the Capitol on Monday, evoking a bygone era of bipartisan civility in American politics.

Before a grieving Bush family and with hands on hearts, members of Bush‘s Cabinet, lawmakers, the vice president and Supreme Court justices honoured the 41st president as his flag-draped casket entered the soaring Capitol Rotunda for the first official ceremony.

Later in the evening, after the family and dignitaries had departed, President Donald Trump and first lady Melania Trump paid their respects, standing for two minutes before the casket.

Trump then saluted Bush, a gesture belying the history of antipathy between the Republican president and the Bush family.

The political dynasty, led by son and former President George W. Bush, accompanied the patriarch’s body on the flight aboard the presidential plane from Texas to Joint Base Andrews outside Washington, and then on a trip down Pennsylvania Avenue to the steps of the Capitol.

Senate Majority Leader Mitch McConnell, the first official to speak in the Rotunda, described George H.W. Bush as a “humble servant” and “a principled leader.”

“He kept us flying high and challenged us to fly higher still, and he did it with modesty and kindness that would’ve been surprising in someone one-tenth as tough and accomplished as he was,” McConnell said.

The body of the one-term Republican president will lie in state at the Rotunda through Wednesday, when a state funeral is scheduled at the Washington National Cathedral.

Bush died at his Houston home on Friday night at the age of 94, seven months after the death of his wife, Barbara. His passing prompted an outpouring of praise from Republicans and Democrats for his kind manner and dedication to public service.

“He was a beautiful, lovely man, it was an honour to work with him, he was beloved,” veteran Democratic leader Nancy Pelosi, expected to be the next speaker of the U.S. House of Representatives, told Reuters as she exited the Rotunda.

Side by side, Democratic and Republican leaders laid floral red, white and blue wreaths around the casket of Bush, the 32nd American and the 12th president to lie in state in the Capitol Rotunda.

“His example will always inspire, and his lifetime of service will be enshrined in the hearts of the American people forever,” said Vice President Mike Pence.

After the official ceremony, the public was allowed to pay its respects. Mourners lined up at the Capitol in the afternoon, many speaking with nostalgia for the comity of the Bush era, in sharp contrast to today’s bitter divisions in the age of Trump.

“I think it’s night and day,” said Sheila Murray, 58, from Stevensville, Maryland, who came with her 14-year-old son, Thomas.

“And I would want to encourage moms to look at what good leaders are and to never lose hope that they can’t raise their children with good morals and integrity.”

Trump had a complicated relationship with the late president. As a candidate, Trump belittled Bush‘s son Jeb, a Republican rival for the presidency, and has long criticised the Iraq War launched by George W. Bush. The elder Bush told a biographer he voted for Democrat Hillary Clinton in 2016.

After services in Washington, there will be another funeral in Houston on Thursday, followed by burial at the Bush Presidential Library in College Station, Texas.

Bush served two terms as vice president under Republican President Ronald Reagan before his own stint in the Oval Office from 1989 to 1993, a time that saw the end of the Cold War as well as the U.S. routing of Iraqi President Saddam Hussein’s army in the 1991 Gulf War.

He failed to win a second term after breaking a no-new-taxes pledge, losing to Democrat Bill Clinton.

Trump has ordered the federal government to close on Wednesday and both the New York Stock Exchange and Nasdaq will be closed in observance. U.S. bond and options markets were also due to be closed, with energy and foreign exchange markets expected to remain open.

Remembrances to George and Barbara Bush sprang up in the Houston neighbourhood where they made their home, at a memorial to the late president at a city park and at the airport named in his honour.

Christy Smith paused over the weekend to pay her respects to Bush at a bronze statue of him at a Houston park.

“He set a good example for all of us,” said Smith, 39. “He always was caring and treated people equally.”

The Health Ministry announced the death of one person due to COVID-19. This raises the death toll from the virus in Cyprus to 231,...
Read more
World

A thermal baths spa in the city of Pisa, where a day to unwind and relaxation is not possible due to Covid restrictions, is...
Read more
Local

The Fire Service in Limassol has been mobilized after a fire broke out in a hard to reach area of Koilani village, According to the...
Read more
Local

Truck collides with van; One person in hospital

An accident occurred at the old Nicosia-Limassol road when a truck collided with a van and as a result one person was injured. According to...
Read more
Local

More than 64,000 vaccinations in Cyprus.

In an announcement, the Health Ministry noted that Cyprus is moving ahead toward the completion of one of its main targets, regarding the vaccination...
Read more

An estimated 2,000 common dolphins were spotted 'stampeding' off the southern California coast on Monday (February 22), according to a whale watching group. The video,...
Read more
World

COVID-19 vaccine makers have told the U.S. Congress that supplies should surge in the coming weeks, while a European Union official said AstraZeneca expects to...
Read more