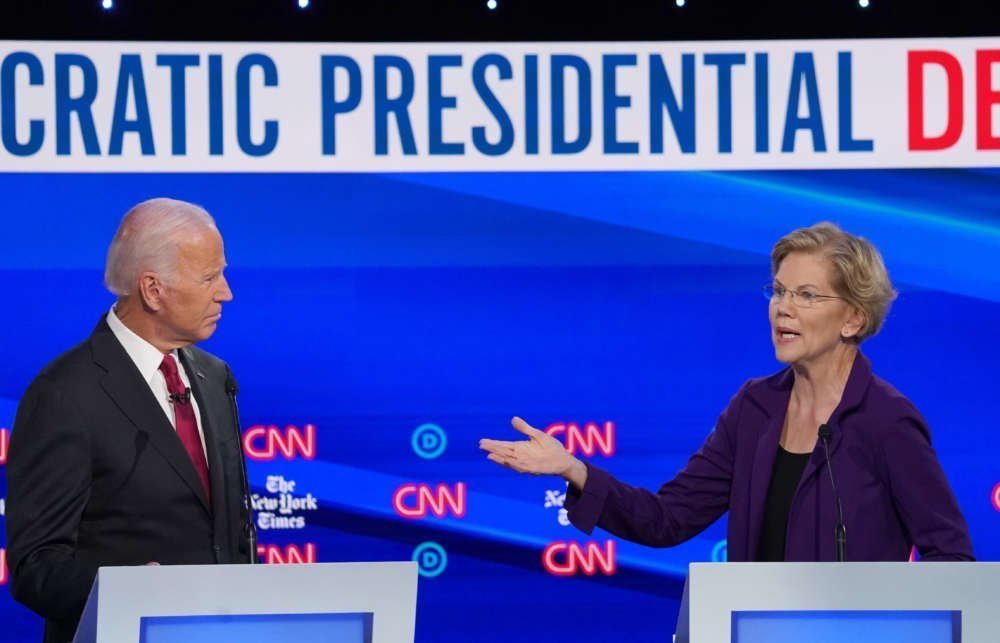 Surging U.S. Democratic presidential contender Elizabeth Warren came under repeated attack on her healthcare and tax policies in a debate on Tuesday, as moderate rivals pushed her to explain how she would pay for ambitious proposals including her Medicare for All plan.

Warren’s recent rise into a virtual tie with former Vice President Joe Biden in many opinion polls made her a frequent target for attacks that exposed the Democratic Party’s divisions between its centrist and progressive wings on a range of issues.

The Democratic contenders for the White House were united, however, in supporting the Democratic-led impeachment inquiry of Republican President Donald Trump and criticizing Trump’s recent decision to withdraw from Syria.

Moderate rivals Pete Buttigieg, the mayor of South Bend, Indiana, and U.S. Senator Amy Klobuchar, facing pressure to break out of the middle of the crowded Democratic presidential field, went after Warren for being evasive on her plan for universal healthcare and said her plan would mean higher taxes or Americans.

“I think we owe it to the American people to tell them where to send the invoice,” Klobuchar told Warren. “The difference between a plan and a pipe dream is something you can actually get done.”

Buttigieg chided Warren, who boasts she has a plan for everything, for not releasing a detailed healthcare plan with an explanation of how she would fund it.

The sharp exchanges were a sign of the heightened stakes as a dozen candidates crammed the debate stage in the electoral battleground state of Ohio. It was the most crowded debate so far in the Democratic race to pick a challenger to Trump in the November 2020 election.

The debate comes at a critical time, as Biden has seen his once solid lead in opinion polls in the Democratic race diminished by Warren, a leader of the party’s progressive movement, who has steadily risen over the past two months.

Warren stayed calm under the repeated attacks, offering her proposals to end income inequality and level the economic playing field for workers.

‘COSTS WILL GO DOWN’

She did not directly respond to questions about whether she would raise taxes for the healthcare plan, but she said she would not sign any bill that does not lower healthcare costs for middle-class families.

“I have made clear what my principles are here, and that is that costs will go up for the wealthy and for big corporations and, for hard-working middle-class families, costs will go down,” she said.

The expansive Medicare for All proposal, based on the government-run healthcare plan for Americans over age 65, has sharply divided Democratic presidential contenders. Some analysts have said it would cost $32 trillion over a decade. Many other Democratic candidates back a Medicare-based plan as just one option for Americans seeking healthcare coverage.

U.S. Senator Bernie Sanders, who sponsored a bill in the Senate to create a Medicare for All plan, said he thought it was “appropriate to acknowledge that taxes would go up” under the proposal.

Buttigieg plugged his plan for “Medicare for All Who Want It,” a proposal that Warren poked fun at.

U.S. Senator Cory Booker tried to stay out of the fight, and warned the Democrats against tearing one another down during the debates. He urged them to keep their eyes on the goal of beating Trump.

Buttigieg and O’Rourke clashed over O’Rourke’s plan for mandatory buybacks of assault weapons by the government. Buttigieg called it unrealistic, and fired back at O’Rourke when he said it was time to stop listening to opinion polls and consultants and focus groups.

“I don’t need lessons from you on courage, political or personal,” Buttigieg said.

At the first debate since Democrats in Congress launched an impeachment probe against Trump, the candidates defended the inquiry and said the president needed to be held accountable for his actions and for stonewalling Congress on its probe.

The investigation focuses on Trump’s efforts to pressure Ukraine to investigate his unsubstantiated allegation that Biden improperly tried to aid his son Hunter’s business interests in Ukraine.

Biden and Sanders both said that Trump was “the most corrupt president in history,” and that Congress would be remiss if it did not pursue the impeachment probe.

“Impeachment is the way that we establish that this man will not be permitted to break the law over and over without consequences,” Warren said.

Biden said Trump was going after him because he did not want to face him in next year’s election.

Some Democrats warned that the party should bring Americans on board to support the probe. “We have to conduct this process in a way that is honorable,” Booker said.

Most of the Democrats criticized Trump’s abrupt decision to withdraw U.S. troops from northern Syria, which cleared the way for a Turkish incursion to attack the Kurds, longtime U.S. allies in the fight against Islamic State.

The debate marked the return of Sanders, 78, the oldest candidate in the field, who suffered a heart attack two weeks ago and has been recuperating at home in Vermont since having stents inserted to open a blocked artery.

The health scare emphasized his age and that of the other top White House contenders – Biden is 76 and Warren is 70, while Trump is 73 – in a race featuring a debate about a generational change in leadership.

“We are going to be mounting a vigorous campaign all around this country,” Sanders said, adding: “I’m so happy to be back here with you.”

The two congresswomen have been frequent targets of Trump for their progressive liberal views.

Biden said his age and experience were a positive in looking at his potential for the White House. “With it comes wisdom,” he said.

By In Cyprus
Previous articlePartly cloudy with scattered showers, possible thunderstorms and dust
Next articleTurkey pushes offensive in Syria, despite sanctions and calls to stop