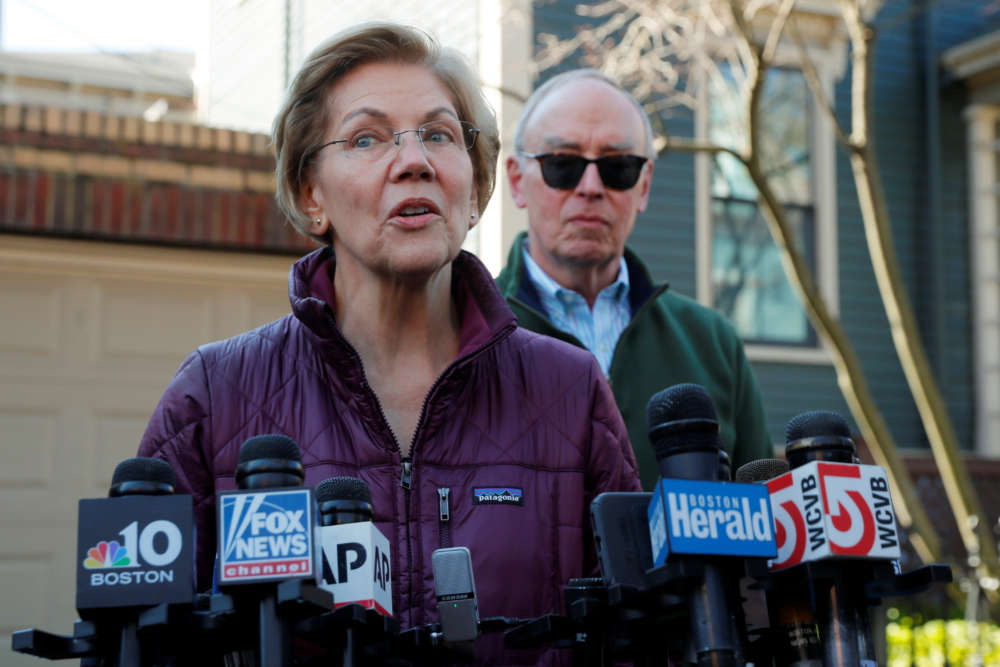 Elizabeth Warren ended her presidential campaign on Thursday after concluding she had no realistic path to the Democratic nomination, leaving behind a two-man battle between former Vice President Joe Biden and Senator Bernie Sanders.

Warren, a liberal senator who won plaudits for her robust policy plans and focused her campaign on fighting the corrupting influence of money on politics, finished well behind the two front-runners on Tuesday in contests in 14 states, including her home, Massachusetts.

Her exit meant that what was once hailed as the most diverse field of candidates in U.S. history narrowed to a race between two white, septuagenarian men for the nomination to face Republican President Donald Trump in November.

Warren did not immediately endorse either of her rivals, saying she would decide at a later time whether to do so. She has spoken with both since Tuesday.

Biden, a 77-year-old moderate, and Sanders, a 78-year-old liberal, have emerged as standard-bearers for the two major wings of the Democratic Party.

Outside her home in Cambridge, Massachusetts, on Thursday, Warren spoke about her failure to find a middle ground between the party’s factions.

The former bankruptcy law professor, who was largely responsible for creating the Consumer Financial Protection Bureau (CFPB), had emerged as a top contender last year, arguing she could serve as a consensus candidate for progressives and centrists.

While Warren is more closely aligned ideologically with Sanders, she may conclude that Biden – who surged to the lead in the race for the Democratic nomination by winning 10 of the 14 ‘Super Tuesday’ states – is better positioned to help advance her policy priorities.

A Reuters/Ipsos opinion poll released on Thursday had Biden with a 10 percentage-point lead among Democrats and Democratic-leaning independents.

Friendship between Warren and Sanders also developed cracks during the campaign. In January, Warren accused Sanders of calling her a “liar” after a debate in which he denied her statement that he had told her a woman could not beat Trump.

Some polls have shown Warren’s supporters almost evenly split between Biden and Sanders when asked to pick their second-favorite candidate.

Both men appealed to her supporters: Biden called Warren the “fiercest of fighters” on Twitter, and Sanders praised her work on women’s rights, corruption and healthcare before making his pitch.

“Today I would simply say to her supporters, of whom there are millions: We are opening the door to you, we would love you to come on board,” he said in Burlington, Vermont.

Trump, who has for years sought to fuel dissent among Democrats by suggesting that party leaders plot against Sanders, said Warren had remained in the race too long.

“If she’s a true progressive, which probably she is, she should have dropped out three days ago. It would have been a whole different race,” Trump told a Fox News town hall. “So when you look at it, she did him no favors. That was not a good friendship.”

The vague notion of “electability,” a campaign buzzword as Democrats prioritized defeating Trump, seemed especially damaging for Warren and other non-white-male candidates.

“The general narrative was that the women might be too risky and I think there were people who heard that enough that it started showing up in polling… and becomes a vicious cycle that was hard to break out of,” said Christina Reynolds, a vice president at EMILY’s List, which works to elect women supporting abortion rights and had endorsed Warren.

“That is the trap question for every woman,” she said. “If you say, ‘Yeah, there was sexism in this race,’ everyone says, ‘Whiner!’ If you say, ‘No, there was no sexism,’ about a bazillion women say, ‘What planet do you live on?'”

In Washington, Democratic House of Representatives Speaker Nancy Pelosi said she believes the country is ready for a woman president but misogyny still plays a role.

“Every time I get introduced as the most powerful woman or whatever, I almost cry because I think – I wish that were not true,” she said.

Meanwhile, Biden and Sanders stepped up their mutual attacks, signaling a bruising battle to come as the race turns to six states holding nominating contests on March 10.

Sanders blamed the “establishment” and corporate interests for his losses on Tuesday. Biden called that “ridiculous.”

By In Cyprus
Previous articleTax Department returns tens of millions
Next articleShowers and dust on Friday, mainly fine over the weekend