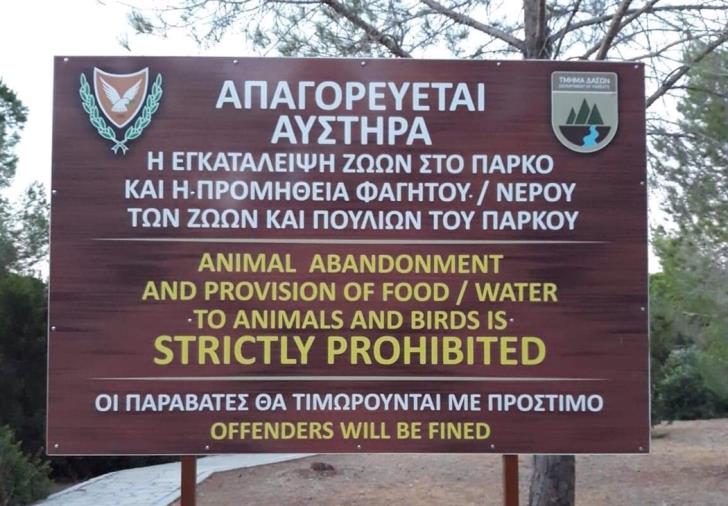 The Forestry Department said it is removing a sign warning members of the public who feed animals in Athalassa Park with a fine, but insists that this practice is wrong and detrimental to wildlife.

Forestry wardens will continue to advise the public not to leave food while a new sign will be put up with clearer wording it added.

The issue arose after the Greens wrote to the Forestry Department to query the sign which reads “Animal abandonment and provision of food/water to animals and birds is strictly prohibited. Offenders will be fined.”

The Greens noted that abandoning animals is a criminal offence, but feeding cats and ducks is not.

The Forestry Department said the sign was intended as a warning, but that the wording would be changed.

But it said that there was an acute problem in Athalassa Park where members of the public were taking food for stray cats and also feeding ducks in the pond with bread, biscuits and rusks which are not part of birds’ natural diet.

This, the department said:

Prohibiting the feeding of wildlife in forest parks is a customary practice implemented worldwide, it added.

Last month the Agriculture Ministry urged the public not to feed the wildlife when they visit forest parks as this not only poses risks to the animals but creates problems.

It said the food supply poses risks to the animals that well-meaning individuals want to help as well as to the environment.