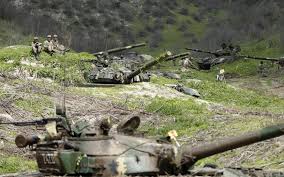 Armenia declared martial law and mobilised its male population after clashes with Azerbaijan over the breakaway Nagorno-Karabakh region in which sources on both sides reported fatalities.

Authorities in Nagorno-Karabakh, a mainly ethnic Armenian region inside Azerbaijan which declared independence in 1991, also announced martial law and mobilised the male population after clashes which the two sides blamed on each other.

Armenia said Azerbaijan had carried out an air and artillery attack on Nagorno-Karabakh, but Azerbaijan said it had responded to Armenian shelling.

Armenian human right activists said two civilians, a woman and a child, had been killed by Azeri shelling. Baku said an unspecified number of Azeri civilians had been killed and six wounded, and Nagorno-Karabakh said 10 of its military staff had been killed. The reports could not be independently confirmed.