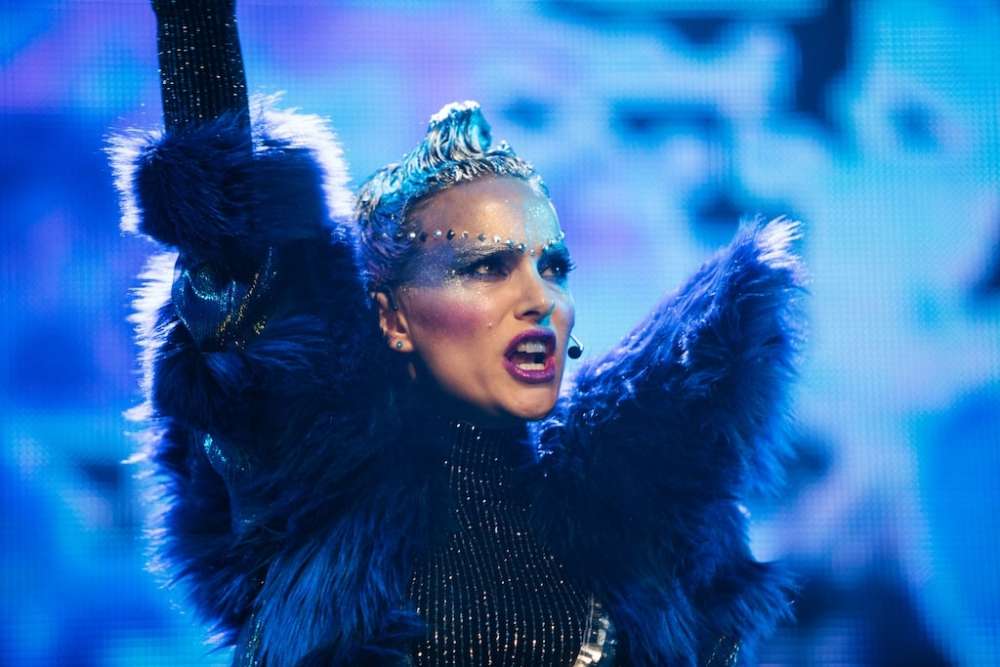 Pop culture and the private lives of stars poses a fascinating enigma for everyday people and therefore is the topic of many films, including this year’s Bohemian Rhapsody and A Star is Born. What sets Vox Lux apart, is that instead of providing viewers with a brief glimpse behind the scenes, the film invites you to explore the chaotic nature of an idol’s life. In this case, a pop star named Celeste (Natalie Portman).

We start off by diving deep into the archives of Celeste’s life and witnessing the traumatic catalyst event that served as the motivator for the beginning of her career at the age of thirteen. Overnight, Celeste transforms from an average thirteen-year-old to a symbol of perseverance and hope for an entire nation. The film follows young Celeste, (Raffeey Cassedy) as she goes through a rapid journey of artistic and personal transformation.

The audience gets to witness the sudden shift in the life of a child who becomes an overnight sensation. As Celeste begins traveling the world with her older sister (Stacy Martin) and manager (Jude Law), she fully detaches herself from her traumatic past and dives head first into a future filled with constant travelling, catchy pop beats, drugs, alcohol and everything else that fame has to offer.

Halfway through, the film takes a radical turn from a typical biopic by skipping decades of Celeste’s life and transporting us into the future. From the first moments of Natalie Portman taking over as older Celeste, we are introduced to a fast-paced world filled with absolute chaos and confusion. Celeste is constantly surrounded by people telling her what to wear, what to say, where to go, yet she looks and feels completely alone. Natalie Portman does an incredible job at portraying someone who has lost grips with reality, and can no longer draw the line between her real and public life.

The film trusts in the intelligence of its audience and refuses to offer an easy solution to decode Celeste’s persona. What happened in between those decades that cost such a rapid shift in her personality?

That is up for the viewer to decide. And the first half of the film offers enough hints and clues for you to be able to put the pieces together, while the second half serves as a rapid descent into a pop culture fever dream.

Also, if you happen to follow the lives of the rich and famous, you will find many easter egg references hidden in Celeste’s personality that will remind you of your favourite celebrities. There is a particular scene in a diner where Celeste’s frantic and hilarious monologue about consumerism in America sounds like it came straight out of Kanye West’s Twitter feed.

Vox lux is an incredibly successful meditation on what it means to be a public figure in the modern world. While Vox Lux explores some serious themes, it never loses grip of what it actually is: a sarcastic take on the biopic which critiques the caricature of celebrity culture. Many will say that the film’s structure is messy and struggles to convey a clear message to viewers, but I find that the chaotic and overwhelming nature of Vox Lux is exactly what makes it an unapologetic tale about the messiness of fame and stardom.

Vox Lux is showing at:

Κ CINEPLEX THE MALL OF CYPRUS