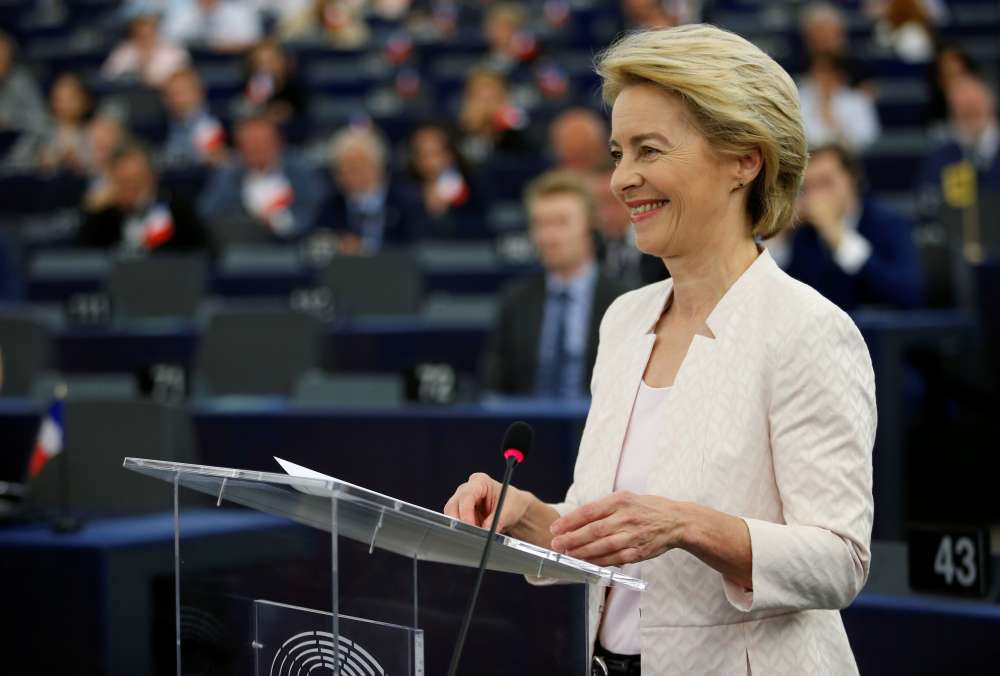 Germany’s Ursula von der Leyen sought on Tuesday to win over sceptical European socialist and liberal lawmakers to back her as European Commission president, laying out ambitious social, climate and migrant policies ahead of a crunch vote.

If European Parliament lawmakers reject von der Leyen, it would be a serious blow for the bloc, beset by challenges from trade to Brexit and erosion of democratic norms.

It would also create a headache for EU leaders who would have to come up with another candidate in a month.

Von der Leyen, who earlier this week resigned as German defence minister regardless of the EU lawmakers’ decision, needs 374 votes for an absolute majority.

Lawmakers will cast a secret ballot at 1600 GMT.

If approved, she would make history as the European Commission’s first female leader. However, her nomination as a compromise candidate by EU leaders as part of horse-trading has angered some lawmakers who had put forward their own candidates.

The 60-year-old German conservative called for unity, trying to win over the fragmented parliament, where eurosceptics made big gains in May elections and Britain’s Brexit party emerged as the biggest in the legislature.

“If we are united on the inside, nobody will divide us on the outside,” added von der Leyen, who grew up in Brussels and switched fluently between German, French and English in her speech.

Addressing growing concerns over climate change, she pledged to inscribe the goal of zeroing out emissions by 2050 into law in her first 100 days, but said it should go with funding for nations needing to ease away from dependence on fossil fuels.

Von der Leyen said she was aware of how controversial migrant issues were and proposed updating EU-wide norms for handling them. “We need to address the legitimate concerns of many and look at how we can overcome our differences.”

In a sign that her pledges may be acceptable, Iratxe Garcia, the leader of the Socialists and Democrats (S&D), said that the German conservative was moving in the right direction but socialists want binding objectives,

The kind of support von der Leyen gets could complicate her job as head of the EU executive in charge of trade negotiations, economic and climate policy for 500 million Europeans and antitrust rulings involving powerful tech giants.

She can count on 182 votes from the conservative European People’s Party and needs to win over the 153 members of the Progressive Alliance of Socialists and Democrats and the 108 from the Renew Europe liberals.

Backing from the far-right European Conservatives and Reformists (ECR), nationalists from eastern Europe, and British members of the European Parliament, however, could cast doubts on her legitimacy and weaken efforts to maintain democratic norms.