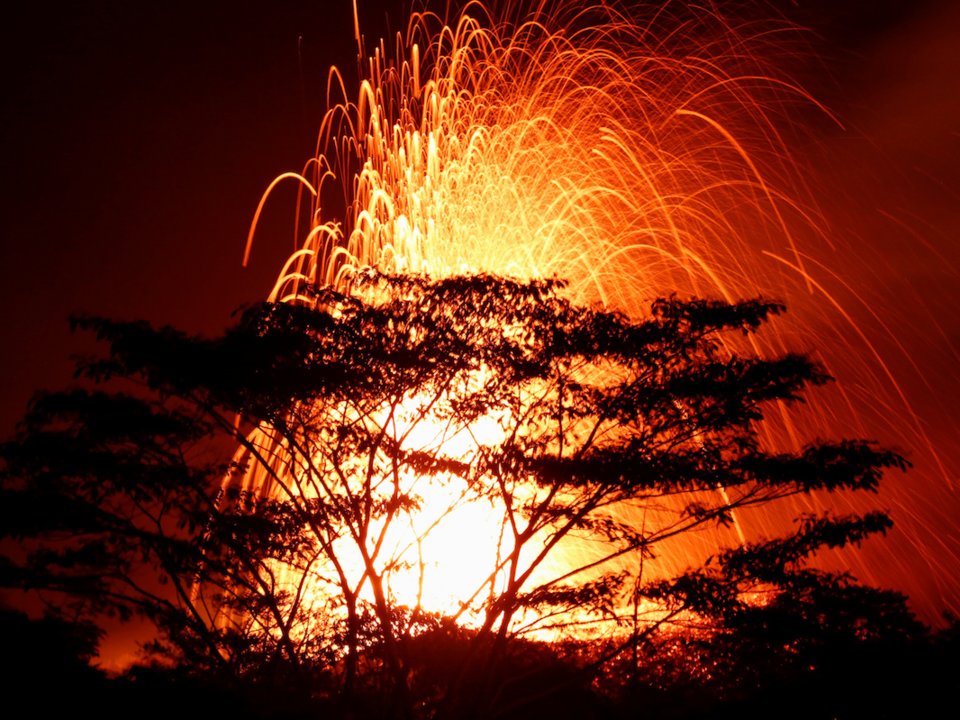 The civil defense notices cautioned motorists, boaters and beachgoers to beware of caustic plumes of “laze” formed from two streams of hot lava pouring into the sea after cutting across Highway 137 on the south coast of Hawaii’s Big Island late on Saturday and early Sunday.

The bulletins also warned that reports of toxic sulfur dioxide gas being vented from various points around the volcano had tripled, urging residents to “take action necessary to limit further exposure.”

“Be aware of the laze hazard and stay away from any ocean plume,” the agency said, warning that potential hazards include lung damage, as well as eye and skin irritation.

Under Sunday’s conditions, with strong winds and copious amounts of lava hitting the ocean, the laze plumes could extend as far as 15 miles (24 km), mostly along the coast and offshore, though the hazard would diminish the farther out to sea it blows, according to USGS geologist Janet Babb.

Authorities cautioned, however, that wind patterns can change abruptly. The U.S. Coast Guard was “actively monitoring” the area to keep away all vessel traffic except permitted tour boats, the civil defense office said.

Laze killed two people when a lava flow reached the coast in 2000, and even a wisp can cause eye and respiratory irritation, the U.S. Geological Survey said. Acid rain from laze has corrosive properties equivalent to diluted battery acid, the agency said.

The section of coastal Highway 137 and a nearby a state park in the area where lava was pouring into the ocean were both closed, and another road in the vicinity was restricted to local traffic as a precaution due to elevated levels of sulfur dioxide gas.

An air quality index for Kona, about 40 miles (64 km) northwest of the eruption site, was at “orange” level, meaning that older individuals and those with lung problems could be affected.

Kilauea, one of the world’s most active volcanoes, began extruding red-hot lava and sulfuric acid fumes through newly opened fissures on the ground along its eastern flank on May 3, marking the latest phase of an eruption cycle that has continued nearly nonstop for 35 years.

The occurrence of new lava-spewing vents, now numbering at least 22, have been accompanied by flurries of earthquakes and periodic eruptions of ash, volcanic rock and toxic gases from the volcano’s summit crater.

The lava flows have destroyed dozens of homes and other buildings, ignited brush fires and displaced thousands of residents who were either ordered evacuated or fled voluntarily.

The volcano has also fed a phenomenon called vog, a hazy mix of sulfur dioxide, aerosols, moisture and dust, with fine particles that can travel deep into lungs, the USGS said.

On Saturday, authorities reported the first known serious injury from the eruptions – a homeowner whose leg was splattered with lava while standing on the third-floor balcony of his home.

With Highway 137 severed, authorities were trying on Sunday to open up nearby Highway 11, which was blocked by almost a mile of lava in 2014, to serve as an alternate escape route.

The Hawaii National Guard has warned of additional mandatory evacuations if more roads become blocked. Officials at the Hawaii Volcano Authority have said hotter and more viscous lava could be on the way, with fountains spurting as high as 600 feet (182 meters), as seen in a 1955 eruption.