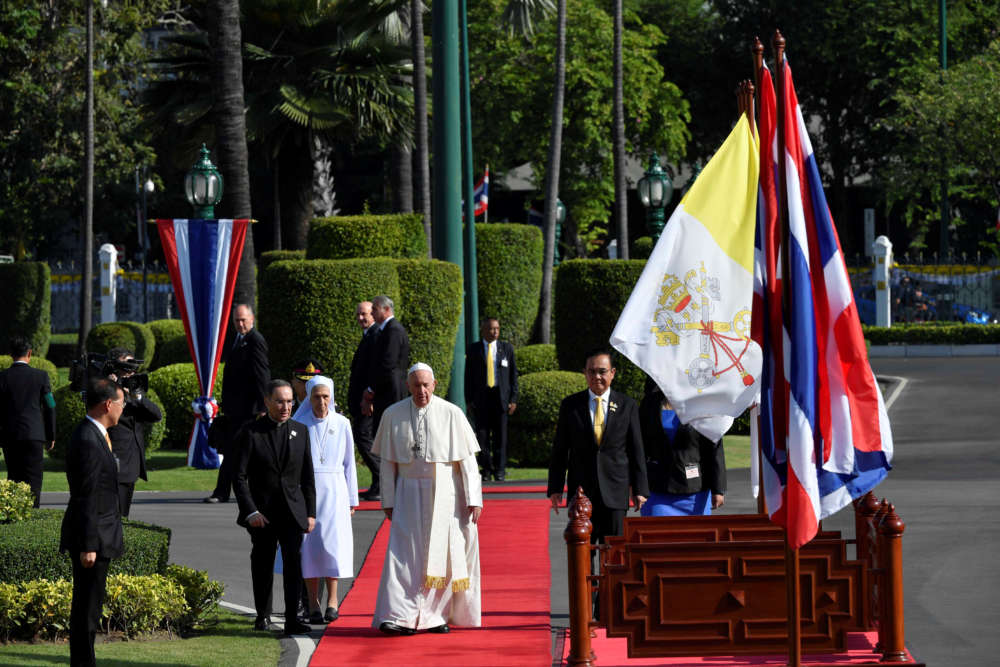 Pope Francis on Thursday condemned the exploitation of women and children in Thailand, which is notorious for its sex tourism, calling the violence, abuse and enslavement they suffer evils that must be uprooted.

Francis started his first full day in Thailand by addressing politicians and diplomats gathered in Government House, an ornate palace that serves as the prime minister’s office.

“I think, too, of all those women and children of our time, especially those who are wounded, violated and exposed to every form of exploitation, enslavement, violence and abuse,” he said at Government House.

Thailand attracts some 35 million tourists a year and the government has sought to shed the country’s reputation for sex tourism.

But repeated crackdowns have not rid Bangkok and other tourist hubs of go-go bars and massage parlours that often offer sex.

Francis, expressed appreciation for the Thai government’s efforts “to extirpate this scourge, and for all those private individuals and organizations working to uproot this evil and to provide ways to restore their (victims’) dignity”.

He also spoke of the plight of refugees, saying they have had to endure “a tragic exodus,” and still face many dangers.

Thailand is home to some of Asia’s oldest refugee camps. About 100,000 refugees from Myanmar have been living in nine camps along the border for decades, many since the early 1980s.

More recently, Thailand has been a major venue for human smugglers and traffickers of tens of thousands of Muslim Rohingya who have fled crackdowns in Myanmar.

The number of human trafficking victims rescued in Thailand is set to hit a record high this year, with demand for cheap labour in neighbouring Malaysia causing a jump in the illegal trade, according to government data.

Thailand’s Catholics number just a little more than 380,000 in a country of more than 65 million, but the small community has thrived and relations with Buddhists are generally good.

Francis, who has come under criticism from ultra-conservative Catholics who accuse him of being too accommodating to other religions, praised the effects he said Buddhism has had on Thais.

“The majority of Thais have drunk deeply from the sources of Buddhism, which have imbued their way of venerating life and their ancestors, and leading a sober lifestyle based on contemplation, detachment, hard work and discipline,” Francis told the patriarch.

Later on Thursday, Francis was due to say a Mass for the Catholic community in Bangkok’s National Stadium. He leaves for Japan on Saturday.