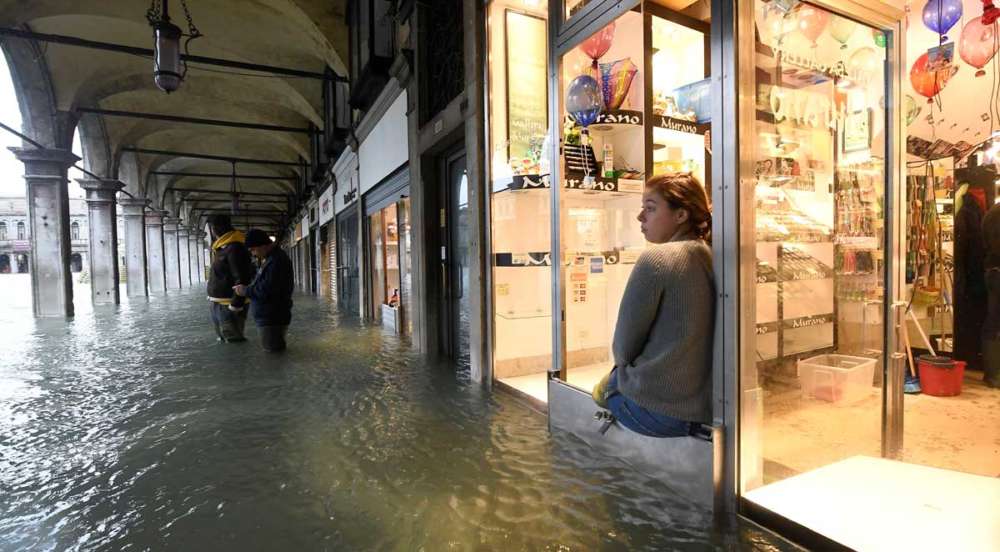 Venice was inundated by exceptionally high water levels on Friday just days after the lagoon city suffered the worst flood in more than 50 years.

The central St. Mark’s Square was submerged and closed to tourists, while shops and hotels were once more invaded by rising waters bringing fresh misery to the fragile city.

Local authorities said the high tide peaked at 154 cm (5.05 ft), slightly below expectations and significantly lower than the 187 cm level reached on Tuesday — the second highest tide ever recorded in Venice.

But it was still enough to leave 70% of the city under water, fraying the nerves of locals who faced yet another large-scale clean-up operation.

“We have been in this emergency for days and we just can’t put up with any more,” said Venetian resident Nava Naccara.

The Italian government declared a state of emergency for Venice on Thursday, allocating 20 million euros ($22 million) to address the immediate damage. Mayor Luigi Brugnaro predicted on Friday the costs would be vastly higher.

“Venice was destroyed the other day. We are talking about damage totalling a billion euros,” Brugnaro said in a video posted on Twitter. “This is a state of emergency, but we are managing it.”

Sirens wailed across Venice from the early morning hours, warning of the impending high tide, and the crypt beneath St. Mark’s Basilica was swiftly inundated.

After Friday’s high waters, forecasters predicted tides of up to 110-120 cm during the weekend. In normal conditions, tides of 80-90cm are generally seen as high but manageable.

The mayor has blamed climate change for the ever-increasing flood waters that the city has had to deal with in recent years, with the mean sea level estimated to be more than 20 cm higher than it was a century ago, and set to raise much further.

Groups of volunteers and students arrived in the city centre to help businesses mop up, while schools remained closed, as they have been most of the week.

At the city’s internationally renowned bookshop Acqua Alta — the Italian for high water — staff were trying to dry out thousands of water-damaged books and prints, usually kept in boats, bath tubs and plastic bins.

“The only thing we were able to do was to raise the books as much as possible but unfortunately even that wasn’t enough … about half of the bookshop was completely flooded,” said Oriana, who works in the store.

A flood barrier designed to protect Venice from high tides is not expected to start working until the end of 2021, with the project plagued by the sort of problems that have come to characterise major Italian infrastructure programmes — corruption, cost overruns and prolonged delays.