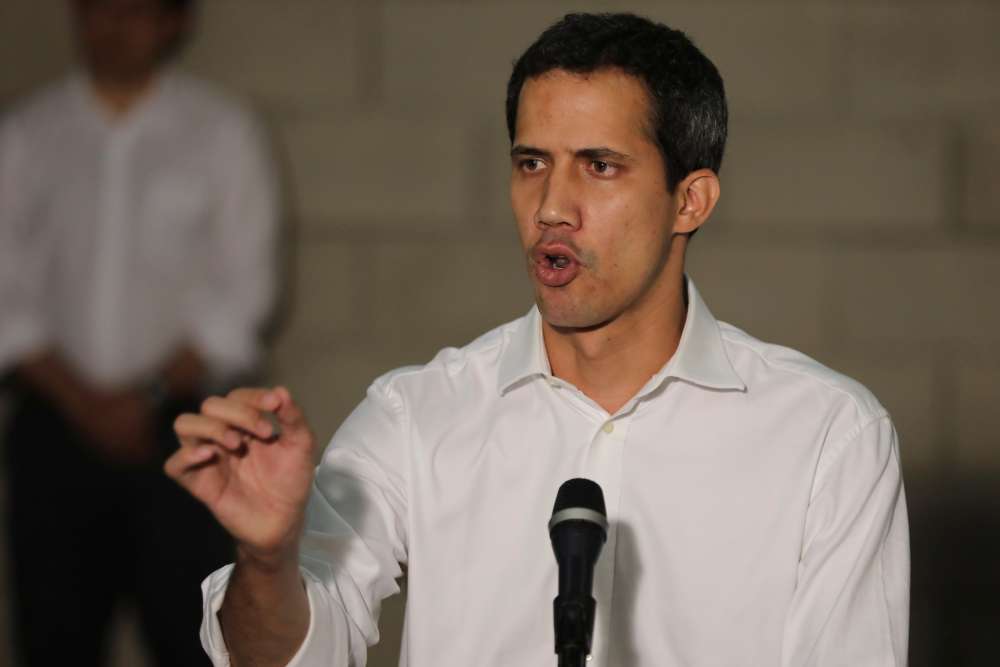 Trucks laden with U.S. food and medicine returned to warehouses in Colombia after opposition supporters failed to break through lines of troops, who dispersed them with tear gas and rubber rounds, injuring dozens. Witnesses said masked men in civilian clothes also shot at protesters with live bullets.

“Today’s events force me to make a decision: to formally propose to the international community that we must have all options open to secure the freedom of our country,” Guaido said on Twitter.

The United States has been the top foreign backer of Guaido, who invoked Venezuela’s constitution to assume an interim presidency last month and is now recognized by most Western nations as the OPEC nation’s legitimate leader.

Guaido had given a personal send-off to one convoy carrying aid from the Colombian city of Cucuta on Saturday.

The opposition had hoped Venezuelan soldiers would baulk at turning back supplies desperately needed in the country, where a growing number of its 30 million people suffer from malnutrition and treatable diseases.

But while some 60 members of the security forces defected on Saturday, according to Colombian authorities, the lines of National Guard soldiers at the frontier crossings held firm, firing tear gas at the convoys. 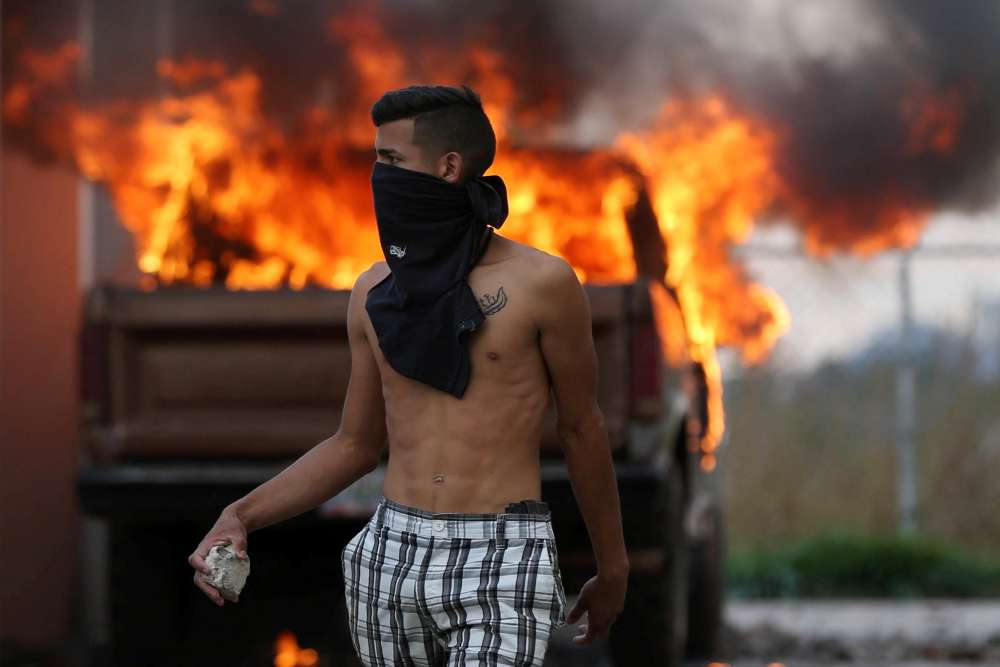 At the Urena border point, two aid trucks caught fire, sending plumes of dark smoke into the air as crowds raced to try to save the boxes of supplies, a Reuters witness said.

Guaido said he would keep demanding Maduro let the aid in and would seek other routes. He said he would attend a meeting of the regional Lima Group of nations in Bogota on Monday with U.S. Vice President Mike Pence during which they would decide more actions to ramp up pressure on Maduro.

“Today the world saw in minutes, in hours, the worst face of the Venezuelan dictatorship,” Guaido said at an earlier news conference in Colombia, alongside Colombian President Ivan Duque.

Angered by Duque’s support for Guaido, Maduro said he was breaking diplomatic relations with Bogota and gave its diplomatic staff 24 hours to leave the country.

Maduro denies his oil-rich nation has any need of aid and accuses Guaido of being a coup-mongering puppet for U.S. President Donald Trump. Washington has warned it could seek to impose tough new sanctions on Venezuela at Monday’s summit if Maduro blocked the aid shipments.

“What do the Venezuelan people think of Donald Trump’s threats? Get your hands off Venezuela. Yankee go home,” Maduro told a rally of red-shirted, flag-waving supporters in the capital, Caracas. “He is sending us rotten food, thank you!”

Trump’s national security adviser John Bolton said on Twitter that countries still supporting Maduro “should take note of what they are endorsing”, in a thinly veiled rebuke to China and Russia.

In the Venezuelan border towns of San Antonio and Urena, troops fired rubber rounds at opposition supporters, including lawmakers, who walked toward the frontier waving Venezuelan flags and chanting “Freedom”.

Reuters television images from San Antonio showed a dozen men on motorbikes, dressed in black and wearing balaclavas, firing shotguns and pistols at a crowd.

Demonstrators in Urena barricaded streets with burning tires, set a bus alight and hurled stones at troops to demand that Maduro allow aid into a country ravaged by a meltdown that has halved the size of the economy in five years. 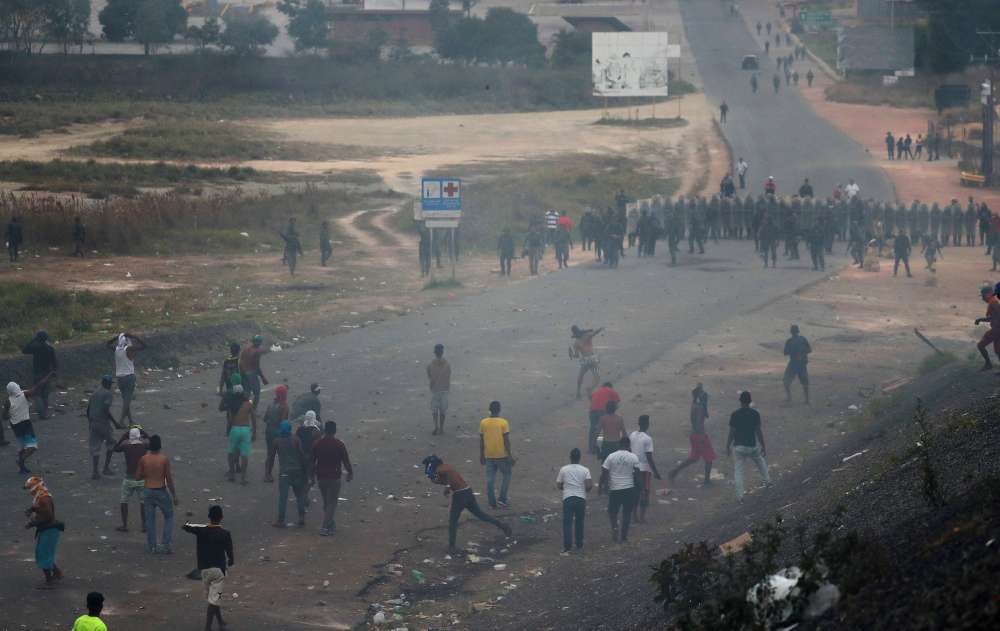 “They started shooting at close range as if we were criminals,” said shopkeeper Vladimir Gomez, 27, wearing a white shirt stained with blood.

At least six of about a dozen trucks that tried to reach Venezuela later returned to Cucuta, where Colombia’s disaster management agency said they would be unloaded and the aid stored until Guaido requested their use again.

Puerto Rico Governor Ricardo Rossello said he ordered a Puerto Rican ship carrying humanitarian aid to turn back after a Venezuelan navy ship threatened to open fire on it.

“This is unacceptable and shameful,” Rossello said in a statement. “We have also notified our partners in the U.S. government about this serious incident.”

In the southern town of Santa Elena de Uairen at least two people were killed in clashes with security forces, according to a doctor at the hospital where they were treated. On Friday, a married couple in a nearby indigenous community was shot dead by security forces.

Rights group Penal Forum said it recorded 29 injuries from bullet wounds and two deaths across Venezuela in clashes with troops on Saturday. Colombian authorities said they registered 285 people injured, including those affected by tear gas.

“I’m a homemaker and I’m here fighting for my family, for my children and parents, resisting the military’s tear gas,” said opposition protester Sobeida Monsalve, 42, in Urena.

Guaido had appealed to Venezuela’s armed forces to stand aside and allow aid in, promising amnesty to officers who disavowed Maduro. Dozens of soldiers, whose families suffer the same shortages as other Venezuelans, took up his offer.

“You don’t owe any obedience to someone who sadistically celebrates that the humanitarian aid doesn’t enter a country that needs it,” Guaido said.

A social media video showed troops who abandoned their post driving armored vehicles across a bridge linking Venezuela and Colombia, knocking over metal barricades, and then jumping out of the vehicles and running to the Colombian side. 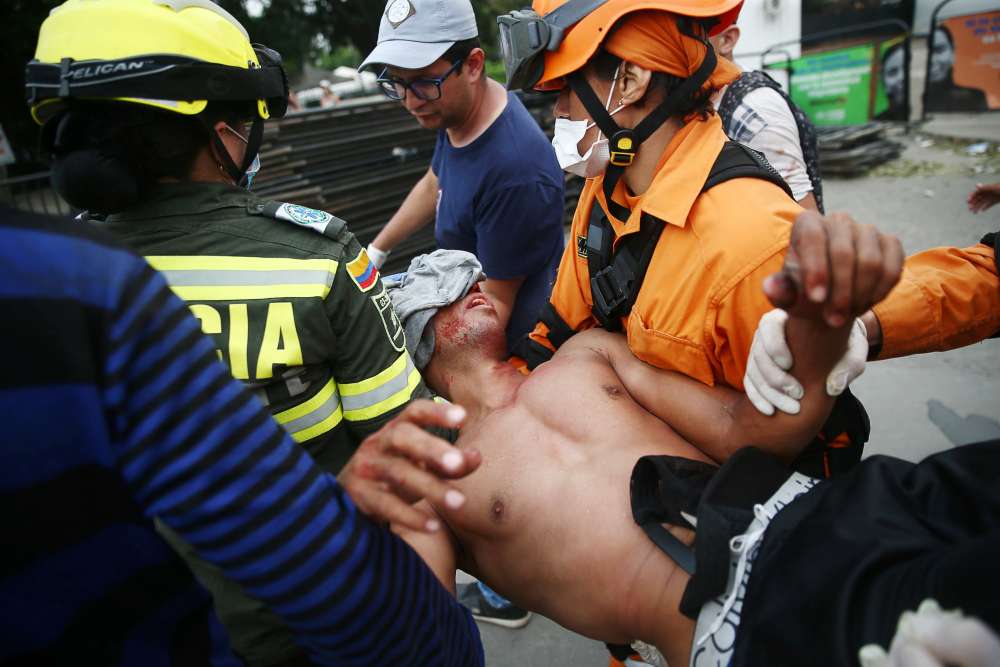 “What we did today, we did for our families, for the Venezuelan people,” one of the defectors said in a video televised by a Colombian news program.

On Saturday, Maduro turned his ire on Colombia and said Duque was letting its territory be used for attacks against Venezuela.

“For that reason, I have decided to break all political and diplomatic relations with Colombia’s fascist government,” he told cheering supporters.

Thousands of white-clad protesters gathered outside a military base in Caracas to demand that the armed forces allow in the aid.

“This is the biggest battle that the armed forces can win,” said Sheyla Salas, 48, who works in advertising. “Please join this struggle, get on the right side of history, allow the humanitarian aid to enter.”