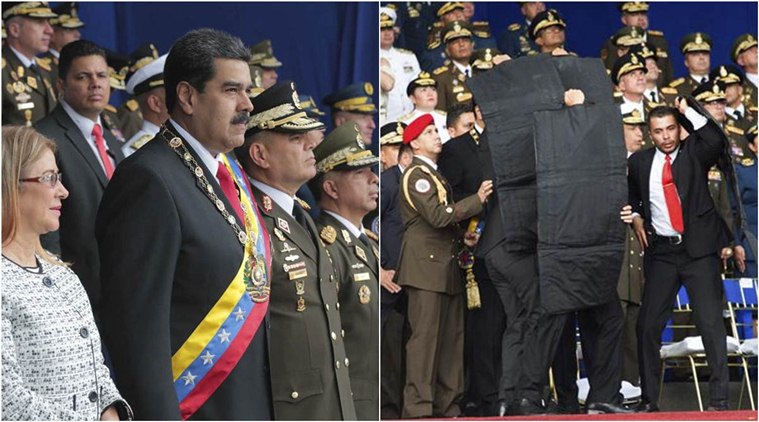 Venezuela’s government said on Sunday that six people had been detained over drone explosions at an event attended by President Nicolas Maduro as his political opposition warned of a possible crackdown after he accused his adversaries of seeking to assassinate him.

State television on Saturday evening showed the socialist leader appearing startled by what seemed to be an explosion while he was giving a speech in Caracas. Seconds later, the footage panned to hundreds of soldiers chaotically scurrying out of formation.

One of the six suspects detained had a pending arrest warrant for a 2017 attack on a military base, and a second had been arrested in 2014 for participating in anti-government street protests, Interior Minister Nestor Reverol said.

Opposition critics said the government has in the past used such incidents as a pretext for heavy-handed actions against critics, including jailing some of the country’s best-known leaders.

“We warn that the government is taking advantage of this incident … to criminalize those who legitimately and democratically oppose it and deepen the repression and systematic human rights violations,” wrote the Broad Front opposition coalition in a statement published on Twitter.

Bolivar Avenue of downtown Caracas, where the incident took place, was calm on Sunday morning. Joggers and cyclists were taking up two of the lanes that are traditionally used for weekend recreation. The stage where Maduro spoke had been removed.

Two witnesses in the area said on Sunday that they heard and felt an explosion in the late afternoon, then saw a drone fall out of the sky and hit a nearby building.

“I heard the first explosion, it was so strong that the buildings moved,” said Mairum Gonzalez, 45, a pre-school teacher. “I went to the balcony and I saw the little plane … it hit the building and smoke started to come out.”

A second witness, who lives in the building that was struck by the drone but asked not to be identified, described a similar sequence of events.

Firemen appeared quickly on the scene to put out the blaze, but were not told what the cause of it was, said Caracas Fire Department Official Jose Oropeza.

A shadowy and little-known group called the National Movement of Soldiers with T-Shirts, which claimed responsibility for the incident, sent a statement wishing a speedy recovery for seven wounded soldiers but vowed further resistance.

“We will not cease our struggle until we achieve the restoration of the constitution and of democracy,” read the statement.

Reuters was unable to independently confirm the involvement of the group, which in the past has said it is linked to anti-government street protesters known as “The Resistance.”

Maduro ally Freddy Bernal via Twitter sent mug shots of seven people who appeared to be in their early twenties, urging the Venezuelan people to search for “these traitors.”

Leopoldo Lopez, formerly mayor of Caracas’ district of Chacao, for example, is under house arrest for his role in 2014 street protests that Maduro described as a coup attempt but his adversaries insisted were a form of free expression.

Maduro’s allies counter that the opposition has a history of involvement in military conspiracies, most notably in the 2002 coup that briefly toppled socialist leader Hugo Chavez.

The OPEC member is struggling under the collapse of a once-prosperous socialist system, with millions now struggling to eat or find medicine – causing a growing exodus of citizens.

Maduro, who blames the country’s problems on an “economic war” led by adversaries, during the course of his five-year rule has often announced having foiled military plots against him that he says are backed by Washington.

“I have no doubt that everything points to the Right, the Venezuelan ultra-Right,” Maduro said in a broadcast. “Maximum punishment! And there will be no forgiveness.”

U.S. National Security Advisor John Bolton told Fox News in an interview on Sunday that the United States was not involved in the blast.