US to continue working with Cyprus government to deepen ‘terrific partnership’ 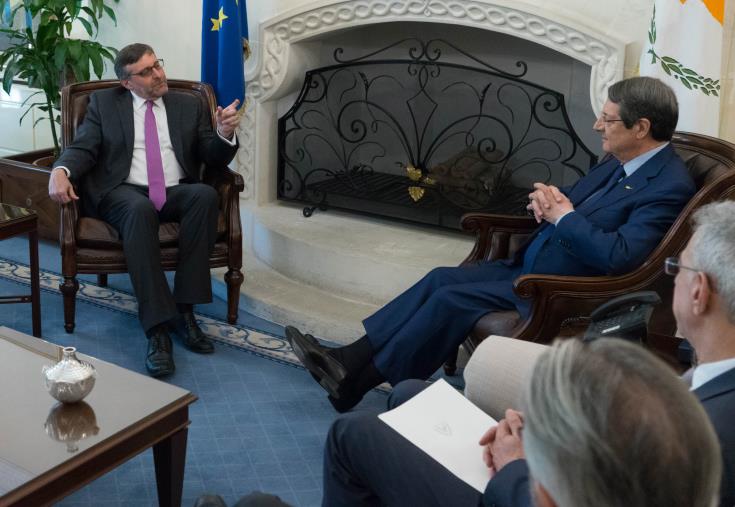 US Deputy Assistant Secretary for European and Eurasian Affairs Matthew Palmer has said that he looks forward to continuing to work closely with the government of Cyprus “to deepen and strengthen what is a terrific partnership.”

Palmer who made a statement to the media after being received at the Presidential Palace by President Nicos Anastasiades said he had a good conversation with the President. “We talked through a full range of issues in the bilateral relationship. It’s a pleasure for me to be back in Cyprus,” the US official said, as he served in the US Embassy to Cyprus in the past.

“It’s been quite a number of years. I did live here for three years. I have fond memories of Cyprus. I do love this place. It’s great to be back and I look forward to continuing to work closely with the government to deepen and strengthen what is a terrific partnership,” he noted.

On his part, Goverment Spokesman Prodromos Prodromou told the media, that Anastasiades and Palmer  reviewed the American-Cypriot relations focusing on their upgrading during the recent period.

He said Prodromou noted that Anastasiades and Palmer discussed a whole range of issues regarding Cyprus-US bilateral relations and US’ special interest  in the trilateral cooperation among Cyprus, Greece and Israel, and its participation in this mechanism which contributes to stability and security in the region.

The spokesman said that they also discussed the progress in efforts to lift the US arms embargo on Cyprus and the subsequent new relationship between the US and Cyprus.

Moreover, they discussed the financial relations and the important prospects of expanding and deepening them as well as about cooperation in the energy field, between the major companies involved in the Cypriot energy programme, and the US interests in the region, he added.

The President has asked the US to contribute towards influencing Turkey so that the negotiations will resume, he added.

Asked if the issue of the UN peacekeeping force in Cyprus (UNFICYP) was discussed, the spokesman said that it was mentioned in the framework of the discussion on the Cyprus problem, all the aspects of which were discussed.

Earlier Palmer met with Foreign Minister Nicos Christodoulides, with whom he discussed bilateral relations between Cyprus and the US, the Eastern Mediterranean, energy and security issues and the Cyprus problem.

Cyprus has been divided since 1974, when Turkish troops invaded and occupied 37% of its territory. Repeated rounds of UN-led peace talks have so far failed to yield results. The last round of negotiations, in July 2017 at the Swiss resort of Crans-Montana ended inconclusively.