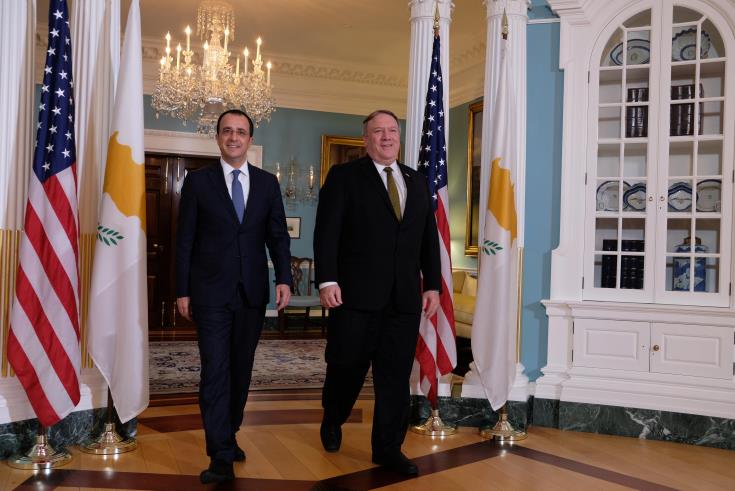 US Secretary of State Mike Pompeo reaffirmed longstanding US policy on resources in the Republic of Cyprus’ Exclusive Economic Zone and also said that the United States continues to support efforts for a solution of the Cyprus problem, a statement issued by the State Department regarding Tuesday’s meeting between Pompeo and Cypriot Minister of Foreign Affairs Nikos Christodoulides says.

“Secretary Pompeo and Foreign Minister Christodoulides agreed on the importance of enhancing the U.S. – Republic of Cyprus relationship and welcomed the signing by Foreign Minister Christodoulides and Assistant Secretary for European and Eurasian Affairs A. Wess Mitchell of a Statement of Intent on strengthening and developing the bilateral security relationship,” the written statement by Spokesperson Heather Nauert says.

Nauert notes that “the Statement of Intent will advance shared interests in combatting terrorism, enhancing maritime and border security, and promoting regional security.”

“The Secretary reaffirmed longstanding U.S. policy on resources in the Republic of Cyprus’ Exclusive Economic Zone and also said that the United States continues to support Cypriot-led, UN-facilitated efforts to reunify the island as a bizonal, bicommunal federation, which would benefit all Cypriots,” Nauert says.

By In Cyprus
Previous articleTrump ousts GA Sessions, vows to fight Democrats if they launch probes
Next articleElderly woman saw 9-year-old crying for help “but could not walk”