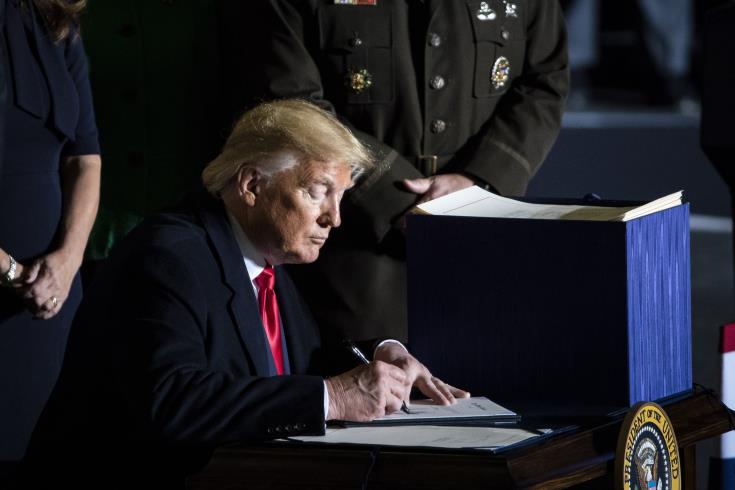 US President Donald Trump signed on Friday the bills securing funding for federal government agencies, which also include the “Eastern Mediterranean Security and Energy Partnership Act”, a few hours before the deadline. The US President signed the bills aboard the presidential airplane, en route to Florida, where he will spend the holidays with his family. A White House official informed the media about the signing of the bills just before landing.

President Trump also signed the annual defense authorization bill into law on Friday, at a signing ceremony at Joint Base Andrews in Washington. The bill includes provisions lifting the arms embargo on Cyprus, while prohibiting the transfer of F-35 fighter jets to Turkey due to the purchase of the Russian S-400 missiles. It also states that the Congress deems that CAATSA provisions have been violated and calls for sanctions.

The White House raised however a series of objections in relation to various provisions of the spending act, some of which relate to the East Med Act, military aid to Greece, International Military Education and Training assistance to Greece and Cyprus, the participation of the United States in the Eastern Mediterranean Gas Forum and possibly in the trilateral cooperation schemes. Similar objections were raised in relation to other countries, mostly Ukraine.

In a statement issued later by President Trump, it is noted that “certain provisions of the Act (such as Division J, sections 203 and 206) purport to restrict the President’s constitutional authority as Commander in Chief to control the personnel and materiel that the President believes to be necessary or advisable for the successful conduct of military missions.”

It is added that “numerous provisions of the Act could, in certain circumstances, interfere with the exercise of the President’s constitutional authorities to articulate the position of the United States in international negotiations or fora” pointing among others to divisions 203 and 208 of the East Med Act.

Division 206 refers to the appropriation of funds for military aid for Greece and International Military Education and Training assistance for Greece and Cyprus.

Division 208 states that “not later than 90 days after the date of the enactment of this Act, the Secretary of State, in consultation with the Secretary of Defense and the Secretary of Energy, shall submit to the appropriate congressional committees a strategy on enhanced security and energy cooperation with countries in the Eastern Mediterranean region, including Israel, the Republic of Cyprus, and Greece.”

A source from the Congress said that the President’s objections do not concern the substance, but have to do with the right of the legislative power to impose on him certain issues which the President considers to fall within his exclusive jurisdiction. The same source said that two years ago funds were allocated for International Military Education and Training assistance for Greece through the same legislation without any problems.