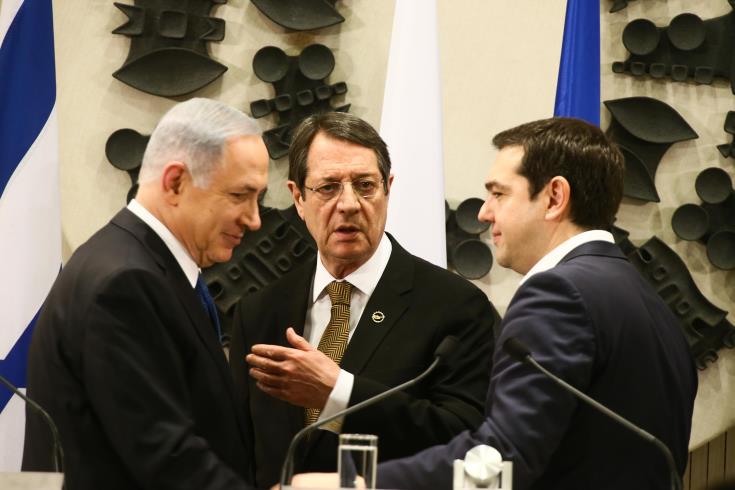 The 5th Cyprus-Greece-Israel Trilateral Summit takes place on Thursday in Beer Sheva, in the presence of the United States of America.

As CNA learns, the United States will be represented in the Summit by their Ambassador in Israel, David Friedman, who served as adviser to Donald Trump during his presidential campaign. US interest focuses on security of energy infrastructure and cybersecurity.

Moreover, Energy Ministers Yiorgos Lakkotrypis, George Stathakis and Yuval Steinitz will also meet in Beer Sheva, on the sidelines of the Summit.

The leaders are expected to start with bilateral deliberations on Thursday morning, to be followed by a trilateral tête-à-tête. Extended consultations with the participation of the delegations of all three countries will follow immediately after.

They are expected to discuss the Cyprus issue, energy, regional developments, the Middle East peace process, research and innovation, education, tourism, communications, agriculture and cyber security, among others.

A series of bilateral and trilateral Memoranda of Understanding will be signed next, while Premier Netanyahu will host a working lunch for the leaders and their delegations.

The first Cyprus-Greece-Israel Trilateral Summit took place in Nicosia, on January 28, 2016. President Anastasiades said then that the summit, in which the three sides agreed to promote joint energy projects, was “historic.”

It was followed by the second Summit in Jerusalem, less than a year later, on December 8, 2016. The third Summit was held in Thessaloniki, Greece and the fourth was hosted a few months ago, May 8, 2018, in Nicosia.

Energy projects of common interest include the submarine power cable Euroasia Interconnector, as well as the East Med pipeline connecting Israel with Cyprus and Greece.

By In Cyprus
Previous articleMainly fine with some showers possible in the morning
Next articleWhirlwind in Pyrga causes damage, power cut