US is looking for friends, given “Russia’s malevolent machinations,” Congressman says in Cyprus 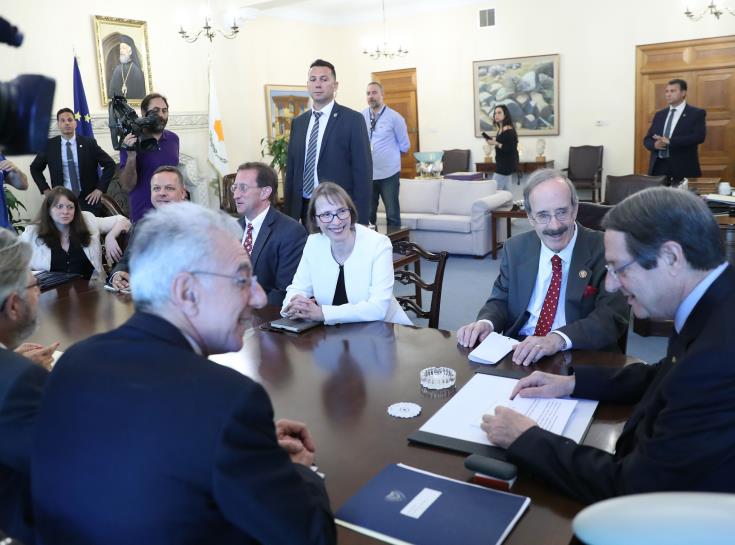 Given “Russia’s malevolent machinations”, the US is looking for friends who share its core values, such as democracy, and that is certainly the situation here as well, Chairman of the US Congress Foreign Affairs Committee Eliot Engel said after being received on Monday by Cyprus President Nicos Anastasiades.

Responding to questions by the media, Engel also noted that the energy rights that Cyprus has are exciting, “it is a new threshold and I think that Mr. Putin in Russia can’t and shouldn’t have been able to control the situation.”

Engel expressed his support to further enhancing Cyprus-US relations, while asked if enhancing this relationship involves lifting of the US arms embargo against Cyprus, he said that “there will be negotiations, there will discussions and I think there will be progress made.”

“This is no longer the 1970s and we have to look each problem with a fresh look and I am for that. I think again we have the opportunity to bring our two countries closer than never before and I want to be part of it. I think it is important for both countries,” he added.

Asked how the US Congress views Turkish actions in the Eastern Mediterranean, Engel replied: “I’d rather be more positive, talking with the President about relations between Cyprus and the US. We both agree that things are moving in a positive way, that we have he opportunity now to have a closeness in ties unprecedented between our two countries and I want to do everything I can”.

“I’ve always been a supporter of Cyprus. Obviously, I’ve always been at the Foreign Affairs Committee and now as the Chairman I want to do everything I can to continue to enhance the Cyprus-US relationship,” Engel noted.

Invited to say how the US view has changed regarding the Eastern Mediterranean, Engel said that  “with Russia’s malevolent machinations I think we are looking for friends who share our core values, democracy, and that is certainly the situation here as well.”

“There are always problems that have to be overcome. It is not a hundred in one way and zero in other way but I do think that the US and Cyprus share many many goals, many goals of democracy. I am excited about the prospects of working with Cyprus. I am excited about the prospects of our ally Israel working with Cyprus,” he stressed.

He expressed the view that “we have an opportunity for peace and cooperation as never before. The energy rights that this country has are exciting, it is a new threshold and I think that Mr. Putin in Russia can’t and shouldn’t have been able to control the situation.”