US, Greece, Israel and Cyprus ‘key partners’ in security and prosperity in Eastern Med 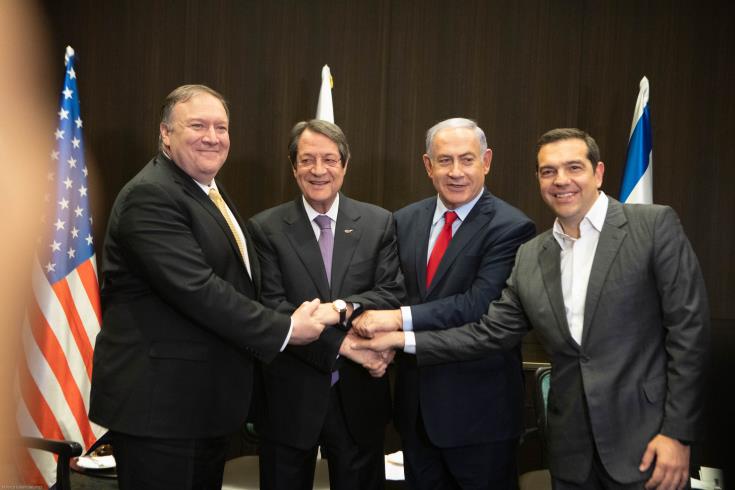 The leaders of Cyprus, Greece and Israel and US Secretary of State Mike Pompeo, underlined that all four countries are “great key partners for the security and prosperity”.

The remarks were made at the opening of the 6th trilateral summit that took place in Jerusalem between Israeli PM Benjamin Netanyahu, Greece’s PM Alexis Tsipras and President of the Republic of Cyprus, Nicos Anastasiades with the participation of US Secretary of State, where the three emphasised the significance of the EastMed Energy Corridor and described their collaboration as one of the best ones in the world.

In his remarks, President Anastasiades described the summit as a “great moment” and thanked his “good friend, Prime Minister Netanyahu, for convening this very historic meeting in Jerusalem”.

Anastasiades said Pompeo’s presence in Jerusalem, is “tangible proof that our three countries constitute reliable partners of the US, particularly in the fields of energy and security, and an anchor of stability in the Eastern Mediterranean”.

The President said “our vision and actions for an Eastern Mediterranean Energy Corridor is an excellent example in this respect”.

He assured of Cyprus’ unwavering commitment to this reliable and solid partnership that aims, through tangible actions, to generate much needed security, stability and prosperity in our turbulent region.

This is our vision, the President remarked and added “we are extremely happy that the Secretary of State is here to endorse its geopolitical value on behalf of the United States”.

Israeli Prime Minister Benjamin Netanyahu said that what the three countries began a few years ago “has blossomed into one of best regional associations in the world.”

The three, he said, cooperate from firefighting to energy and are planning to lay down the EastMed pipeline from Israel to Cyprus, Greece and Europe that will benefit “our economies greatly, provide stability in region and prosperity to our peoples and also will diversify energy sources in Europe”.

The fact that the US Secretary of State was present “signifies the fact that the US supports this regional effort and it has been in many facets”. The Israeli PM said “this is something for the long haul” and welcomed the inclusion of other countries in this association.

In his remarks, Greek prime Minister Alexis Tsipras underlined the role of the three countries in the Eastern Mediterranean, noting that “together and individually we have become stronger”.

Pompeo’s participation, he said, underlines the US supports our strategic cooperation and this participation will strengthen our efforts and dialogue, especially in the field of energy.

Furthermore, he said the establishment of the EASTMED pipeline can help both the security and economic development of the region.

US Secretary of State Pompeo said last week in Houston he talked to energy leaders about the opportunities from projects just like the EastMed and “about how energy connects up with our security interests in America”, to create energy twice as we had it before and  “to create the infrastructure in places that we haven’t had it before is an enormous benefit”.

Pompeo said the US, Israel, Greece and Cyprus are “great key partners for the security and prosperity”.

Furthermore, he said as “we cooperate on these important energy issues, I know we will improve our security and prosperity even more broadly in our nations”. We believe this deeply, he remarked, that when free countries with free markets act together to develop infrastructure for energy, greater security always follows.

“I know this too, if we do this right, we will attract the investments that will maximize these resources in a way that good infrastructure and open markets always do”, he concluded.

By In Cyprus
Previous articleMay urges parliament to back her on Brexit, tells Britons “I’m on your side”
Next articleUS endorses trilateral cooperation between Cyprus, Greece and Israel