US donates personal protective equipment worth €15,000 to Famagusta Hospital 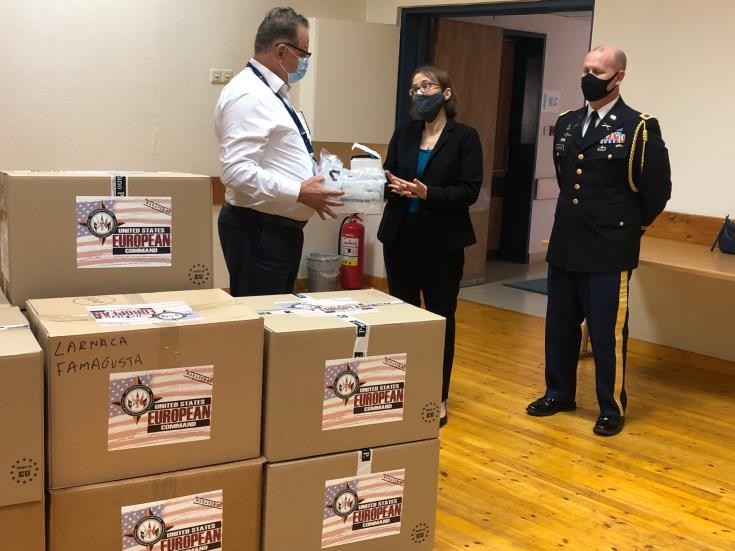 US Ambassador in Cyprus Judith Garber handed over on Monday personal protective equipment valued at €15,000, including over 13,000 masks and over 600 goggles to Famagusta General Hospital, which operates as the Reference Hospital for Covid-19 on the island.

The donation was organised together with the US European Command and took place in the presence of Defence Attaché, Colonel Roger Bowman.

In statements to the press at Famagusta Hospital, Garber said the US Embassy “is very pleased to be here this morning to make this donation to the General Hospital of Famagusta”.

This hospital, she added, “plays such an important role in fighting the pandemic and we are very pleased to be able to provide some support”.

The US Ambassador said that this is “the fourth donation that we have made to Cyprus’ General Health System thanks to the generosity of the US European Command”.

“We are doing this because the Republic of Cyprus is a very close friend of the United States”, she noted, adding that “the only way we are all going to overcome the pandemic is by working together”.

This, Garber noted, “is just a small token of our appreciation in support of the excellent policies the government has had in combating Covid-19”.

The US Ambassador also referred to the support provided by the United States throughout the 60 years since the establishment of the Republic of Cyprus including funding for Larnaca General Hospital and some of the initial seed money for the Cyprus Institute of Neurology and Genetics.

“We really feel that we have a long-standing partnership in the health sector”, she said.

This, she pointed out, “is a time when we all really need to pull together and this (donation) is symbolic of that partnership and our support of the Republic of Cyprus at this difficult time”.

In a short statement Colonel Bowman spoke of the importance of security, pointing out that “the most fundamental aspect of security is the ability of a government to deliver essential services to its population”.

“We hope that this donation will allow Famagusta General Hospital to help protect health care workers and allow them to provide essential services to the Cypriot population”, he said.

On his part, SHSO Director General for Larnaka-Famagusta Districts Yiorgos Karotsakis expressed his thanks for the donation, saying it would boost health care workers’ morale in the fight against Covid-19.

In difficult times when faced with an invisible enemy it is very important to know that all of us are working together, he said, to function and abide by all the measures set by the Ministry and the government in order to avoid the spreading of Covid and any other diseases that could arise in the future.