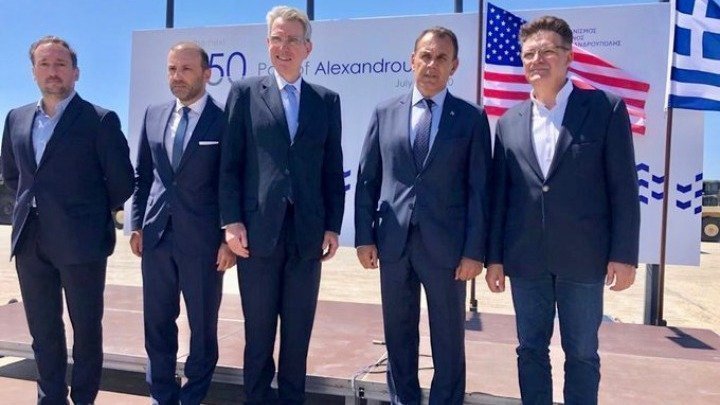 “I would like to make it clear that the term ‘disputed’ refers only to areas where more than one country asserts maritime claims,” US Ambassador to Athens Geoffrey Pyatt said on Thursday in a statement to the Athens-Macedonian News Agency (ANA) on the sidelines of an event at the Alexandroupolis port for the reception and promotion of forces of the 101st US Airborne Brigade in the framework of the NATO exercise “Atlantic Resolve”.

Asked to comment on the reference to “disputed waters” in the US State Department’s statement on developments in Kastellorizo, Pyatt added that “the United States generally does not take a position on other states’ maritime boundary disputes but as a matter of longstanding policy we encourage states to resolve their disputes peacefully and in accordance with international law.”

“I have also made a point on many occasions and I will make it again today, that the United States adheres to the principal of international maritime law that islands, including Kastellorizo, have exactly the same continental shelf and EEZ rights as does any mainland territory,” he added.

Defence Minister Nikos Panagiotopoulos, speaking earlier from the podium of the event, stated on the same subject that “after the verbal improvement (from the American side) it is now clear that the US State Department is sending a message that Turkey is the problem in this case. Turkey disputes, Turkey is the problem and that is now clarified in the text.”

Pyatt stressed: “I want to echo the clear message from Washington and elsewhere in Europe urging Turkish authorities to put on hold operations that raise tension in the region, such as plans to survey for natural resources in areas where Greece and Cyprus assert jurisdiction in the Eastern Mediterranean.”

“So let me be clear: A stronger and more secure Greece is in America’s interests and as Secretary Esper discussed with Minister Panagiotopoulos just this week, our work together deepens a very important bilateral relationship and strengthens the NATO alliance promoting prosperity and security in this strategic region of all of our citizens,” Pyatt added.

Asked by the Athens-Macedonian News Agency if there is de-escalation of the tension, he replied: “Our strong hope is that the signals that we have seen suggesting that there is a prospect of de-escalation will be followed through.”

US Ambassador Pyatt said that the sentiment is shared also by Prime Minister Mitsotakis, the Greek Minister of Defence and certainly the United States shares that hope as well and is using its diplomatic tools to advance that objective.