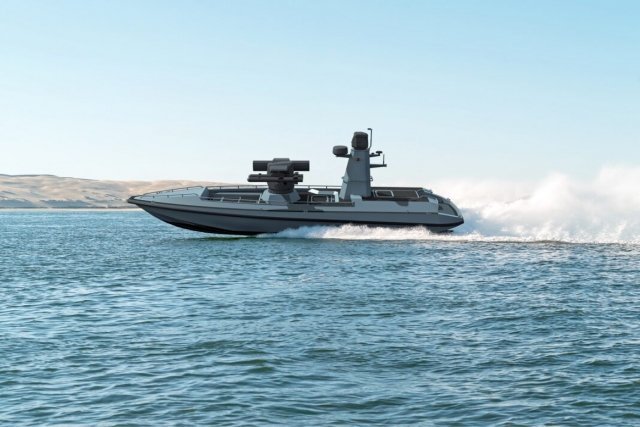 A prototype of Turkey’s first armed unmanned combat surface vehicle (AUSV), the first product of the ULAQ series is due to set sail later this month, said the CEO of one of the firms behind the pioneering vehicle on Tuesday (Dec. 15) The country unveiled the vessel last October in the capital Ankara.

AUSV was produced by a partnership between two leading Turkish defense companies Antalya-based ARES Shipyard and Ankara -based MeteksanDefence companies.

ULAQ, which has a length of 11 meters, a payload capacity of up to 2 tons is equipped with a day/night Electro-Optical (E/O) system, national encrypted communication infrastructure, and manufactured from advanced composite materials.

Following the prototype development, which is the first phase of a broader project initiated by the two companies in the field of unmanned surface vehicles (USV), different UCSV versions for intelligence gathering, mine hunting, anti-submarine warfare, firefighting, and humanitarian aid/evacuation missions will also be ready for mass production.

UtkuAlanc, the CEO of Ares Shipyard told Anadolu Agency that the ship will also carry out firing tests with Turkish Roketsan-guided missiles in March.

Stating that they aimed to serve especially in the Aegean and Mediterranean while designing the SIDA, Alanc also stressed the vehicle is a boat that can gather intelligence. “It will be able to can operate much more easily in these areas. It is very unlikely to be tracked by the enemy forces because of the low visibility we call the radar signature,” said Alanc.

“It is a boat that can observe the rear of the islands like a separate eye for us, gather intelligence, and engage guided missiles at the same time,” he added.

On the other hand, Erdal Torun, vice president of Meteksan Defense, said that there is a command control system that can remotely control and manage all the movements of the sea vehicle in this project.

“Anti-GPS jamming systems also will take place on this platform”, he said.

The unmanned combat vessel will have a cruising range of 400 kilometers (249 miles), a speed of 65 kilometers per hour, day and night vision capabilities, and national encrypted communication infrastructure.

The vehicle can be equipped with different types of payloads, such as electronic warfare, jamming, and different communication and intelligence systems, as well as missile systems to meet the various operational needs of Turkish security forces.