Updated: Witness tells court Tzionis told her he was ‘a murderer’ 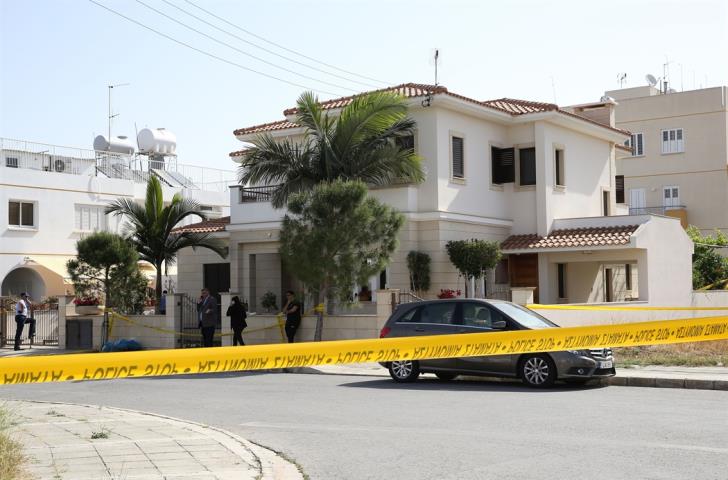 The main defendant in the killing of a school teacher and his wife had described himself as a murderer on the night of the brutal crime, his former girlfriend told Nicosia Criminal Court on Monday.

Sarah Siams, currently serving a four year jail term after pleading guilty to conspiracy to commit a robbery, is appearing as a witness for the prosecution.

In testimony before a packed court on Monday, she recounted what had happened before and after April 17, 2018 — the night Yiorgos Hadjigeorghiou and his wife Dina Sergiou were stabbed to death at their home.

“I’ve come here to tell the truth for the memory of the victims and for their young son. I want all the weight to be lifted. To know that my conscience is clear and I have told everything,” she said.

She is the former girlfriend of Loizos Tzionis who has pleaded not guilty to stabbing the couple at their home in Strovolos in April 2018 in what police believe was a botched robbery.

He has pleaded not guilty to premeditated murder. The other two defendants have pleaded not guilty to all charges but on Monday Solomou asked to change his plea so as to plead guilty to robbery and carrying an offensive weapon. The prosecution said it had the green light to suspend the other charges and would examine the possibility of him testifying as a witness. The facts of the specific two charges will be presented a on July 24.

Describing her life with Tzionis, Siams said that they would use drugs on a daily basis and despite her family’s warnings remained with the defendant even though he beat her and one point locked her in her room and punctured the tyres of her car so that she would not flee.

She said that Tzionis owed a lot of money to drug dealers. She also recognised a knife shown to her at court as belonging to Tzionis, who she said always carried it with him and at some point, even when he slept.

Asked about the night of the murder, Siams said that Tzionis had told her about a robbery, adding that he had told her that he would bring back money and buy a house.

He told them that they would rob a house on Zaloggou Street and assigned roles to each of the four participants. He then lit candles and prayed in front of statues, half-dressed.

He then gave them all drugs and told them he would tell them what time they would be needed.

Before leaving, Tzionis kept changing clothes and in the end he put on a pair of jeans where he hid his knife and sword.

Tzionis gave €50 to Hadjixenophontos to buy cocaine and told them that they would all soon be rich.

Asked by the prosecution, she said that Tzionis had told her that he would go and gag the victims and would kill if he had to. He would then call her and Lefteris to come and get the stolen items.

After midnight, Tzionis telephoned Lefteris and told him that he had committed the murders. She said that she could not believe it. They got into Lefteris’ car and headed there but while they were on their way, he told them to go back home.

When Tzionis got home, he knelt in front of her and asked for forgiveness. She noticed a red stain on his knee but he would not tell her what it was. He showed her the victim Hadjigeorgiou’s  glasses which were broken and then took off his clothes and covered them with chlorine.

Tzionis then asked Lefteris and Siams to go back to the house. They agreed to lie and say that they had.

When they returned he told them he had locked the couple’s teenage son in the basement and then told them to get ready as they were going to Ayia Napa.

On the way to Ayia Napa he told her that she was with a murderer and could leave if she wanted to. She told the court she was too frightened to get out on the motorway.

On the way he threw the sheath of the sword and told her to destroy the sim card in her phone.

They went to a house in Ayia Napa, Tzionis broke into it and they went inside. There she saw that he had a wound on his knee and another on the back.

Siams also told the court what Tzionis had told her about the night of murders.

He told her that he had picked up a cushion to suffocate Dina Sergiou but that she had resisted and started shouting so Tzionis had stabbed her.

He then described how he had killed Hadjigeorgiou saying the last blow was to the back. Then, according to Siams, Tzionis said the teenage son sitting on his bed in his bedroom begging to be spared. He locked the boy in the basement.

Asked how Tzionis was in recounting the events, Siams said that he spoke as if he was describing a film.

She added that Tzionis had told her that police were useless and would never track them down.