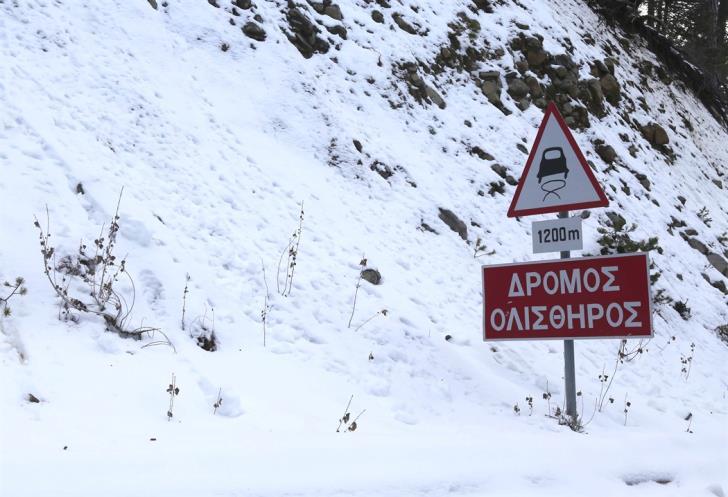 Winter weather is continuing to grip Cyprus with snow in the mountains, strong winds on the coasts and rain in many parts of the island.

A met office announcement warning of strong winds and rough seas remains in force until 6 pm on Tuesday.

A number of roads are closed or open only to four wheel drive cars, while police are urging drivers to be particularly careful because roads are slippery.

Schools in Agros, Lemythou, Kyperounta, Pelendri, Platres and Trimiklini are closed today because of the bad weather, the Education Ministry said.

The following roads are closed to all vehicles:

The following roads are open only to cars with four wheel drive or which are equipped with snow chains:

The following roads are slippery because of ice:

There have been rockslides on the Ayios Ioannis-Agros road and police are urging extra care.

Meanwhile, the met office said a low pressure system accompanied by a cold air mass will affect the area today and tomorrow.

Today, will be cloudy at intervals with scattered showers in many areas and isolated thunderstorms. Snow is expected in the mountains, while thunderstorms may be accompanied with hail.

Temperatures will be 12 C inland and on the east coast, around 14 C on remaining coasts and around 0 C on the mountains where there will be frost in the morning.

The evening will be cloudy with scattered showers and/or thunderstorms and snow in the mountains and higher hill areas.  Temperatures will fall to 4 C inland, 6 C on the coasts and -5 C in the mountains.

Wednesday will be mainly fine with increased cloud cover at intervals, mainly in the west and mountains. Temperatures will remain below average for the time of year.

Thursday will be partly cloudy and scattered showers and/or thunderstorms are expected in the afternoon. There may be snow in the mountains. Temperatures will edge up to close to average.

Friday will be mainly fine with intervals of cloud. Temperatures will edge up a little more.

By In Cyprus
Previous articleHeathrow consults public as it eyes thousands more flights
Next articleChildren rescued from Limassol house fire in care of social services; parents to face charges