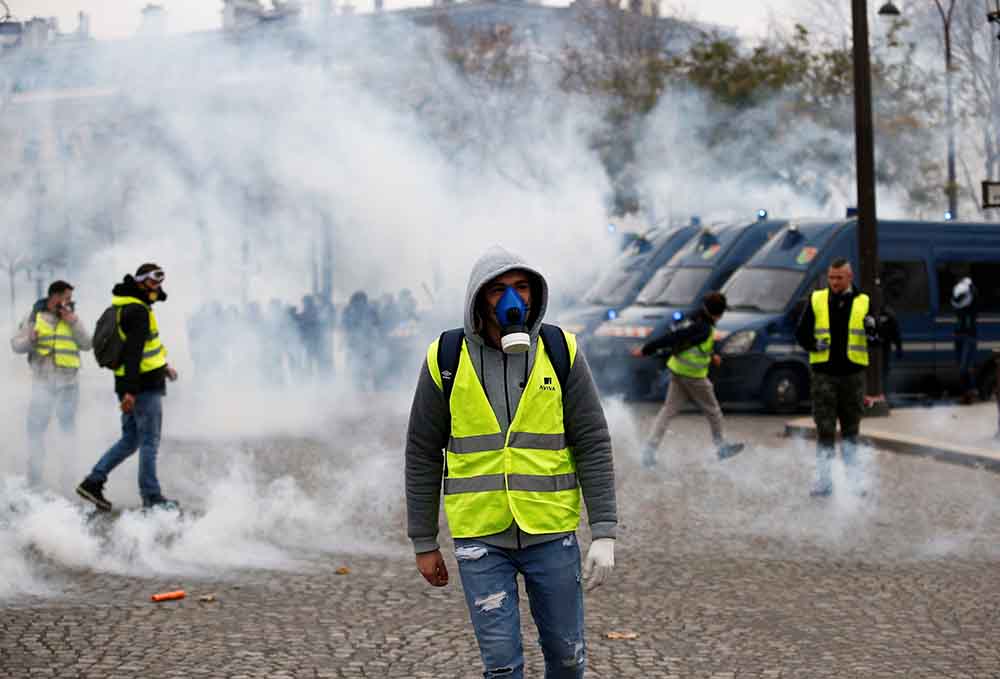 French riot police fought running battles with “yellow vest” protesters in the streets of Paris, in a third weekend of nationwide unrest against high living costs that pose one of the gravest challenges to Emmanuel Macron’s presidency.

In Paris, police said they had arrested more than 265 people while almost 100 were injured as protesters hurled projectiles at riot officers, burned cars and smashed shop fronts. In some areas, groups of masked men roamed freely, smashing a police van with metal bars and setting trees alight.

Police fired stun grenades, tear gas and water cannon at protesters at the top of the Champs-Elysees boulevard and multiple sites across the city including Opera and Place de la Bastille. More than a dozen metro stations were closed.

“We are in a state of insurrection, I’ve never seen anything like it,” Jeanne d’Hauteserre, the mayor of the 8th city district, near the Arc de Triomphe, told BFM TV. 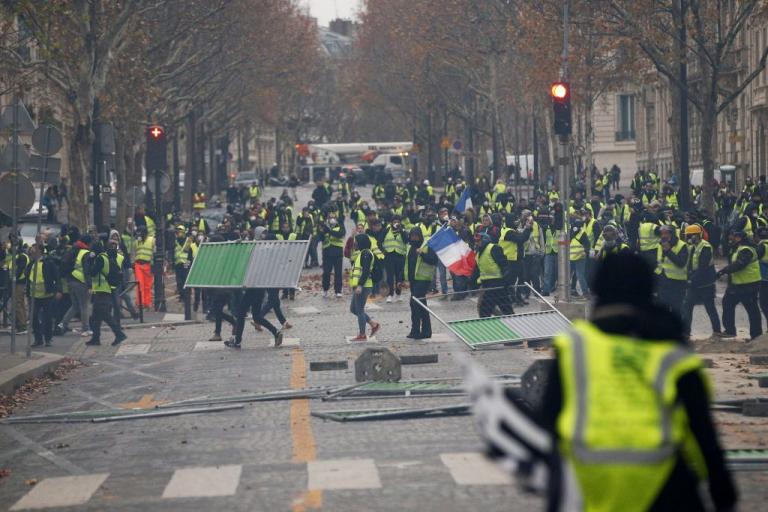 The popular rebellion erupted out of nowhere on Nov. 17 and spread quickly via social media, with protesters blocking roads across France and impeding access to shopping malls, factories and some fuel depots.

On Saturday, some targeted the Arc de Triomphe, chanting “Macron Resign” and scrawling on the facade of the towering 19th-century arch: “The yellow vests will triumph.”

Prime Minister Edouard Philippe expressed his disgust: “I am shocked by the attacks on the symbols of France. We are committed to dialogue, but also respect for the law.”

Other protesters smashed the windows of shops including branches of Chanel, Apple Inc and Dior, where protesters daubed a wooden board “Merry Mayhem”.

Security officials were locked inside the Interior Ministry for crisis talks for several hours during the afternoon.

The skirmishes in Paris broke out early on Saturday, amid concern that violent far-right and far-left groups were infiltrating the “gilets jaunes” (yellow vests) movement. 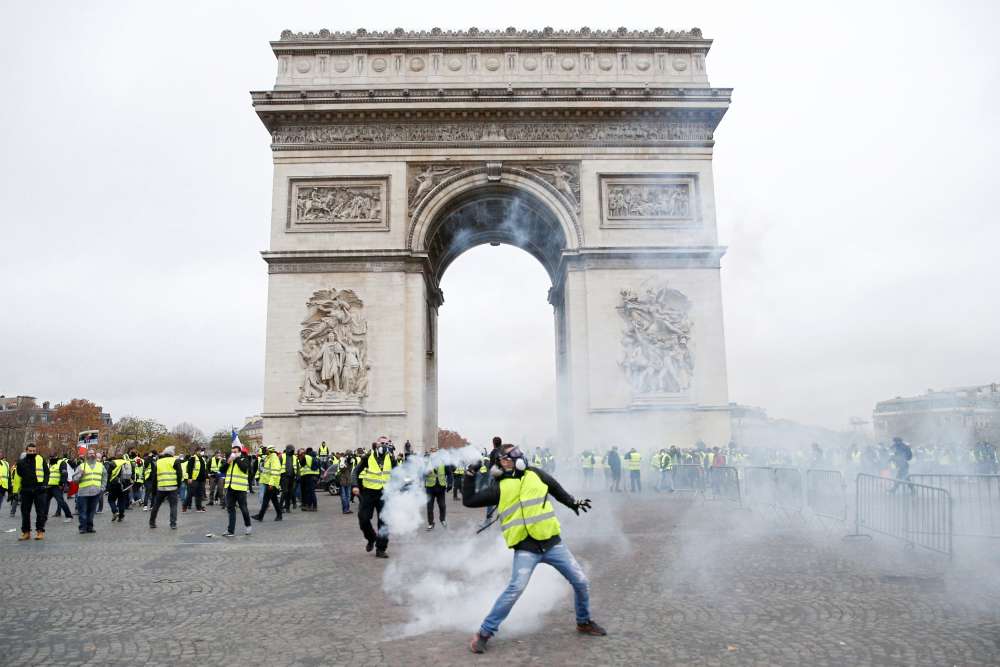 Police were tracking “violent radical groups” who were well-prepared and switching from one location to another, Deputy Interior Minister Laurent Nunez said.

The “yellow vest” protests began as a backlash against Macron’s fuel tax hikes, but have tapped into a vein of deep dissatisfaction felt towards the 40-year-old’s economic reforms, which many voters feel favour the wealthy and big business.

Unrest erupted in several towns and cities across France, from Charleville Mezieres in the northeast to Marseille in the south. In the Riviera city of Nice, trucks blocked access to the airport.

The protests are taking a toll on the economy. Numerous neighbourhoods in central Paris that should have been teeming with tourists and Christmas shoppers instead resembled battle zones, as smoke and tear gas hung in the air and debris littered the ground.

Hotels and department stores in Paris stand to lose millions in revenues, and shelves have run empty in some supermarket stores in the country. 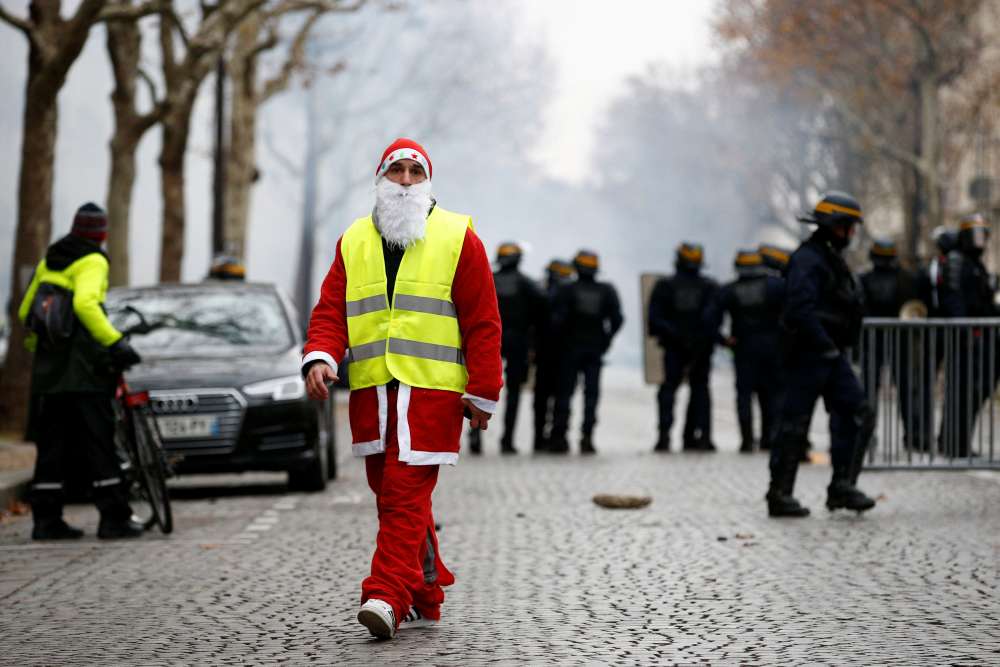 The protests have caught Macron off-guard just as he was trying to counter a fall in his popularity rating to 20 percent. His unyielding response has exposed him to charges of being out of touch with ordinary people, particularly in rural villages and the provincial hinterlands.

Some peaceful protesters held up a slogan reading, “Macron, stop treating us like idiots!”

Macron, who is at the G20 leaders summit in Argentina, on Tuesday said he understood the anger of voters outside France’s big cities over the squeeze fuel prices have put on households. But he insisted he would not be bounced into changing policy by “thugs”.

Despite the unrest that has accompanied the protests, the “yellow vests” have widespread public support, even in the cities.

“I am totally behind the ‘Gilets Jaunes’,” said George DuPont, a resident in Paris’ upscale 16th arrondissement. “The state has stolen money from the French people. It’s time too give it back.” 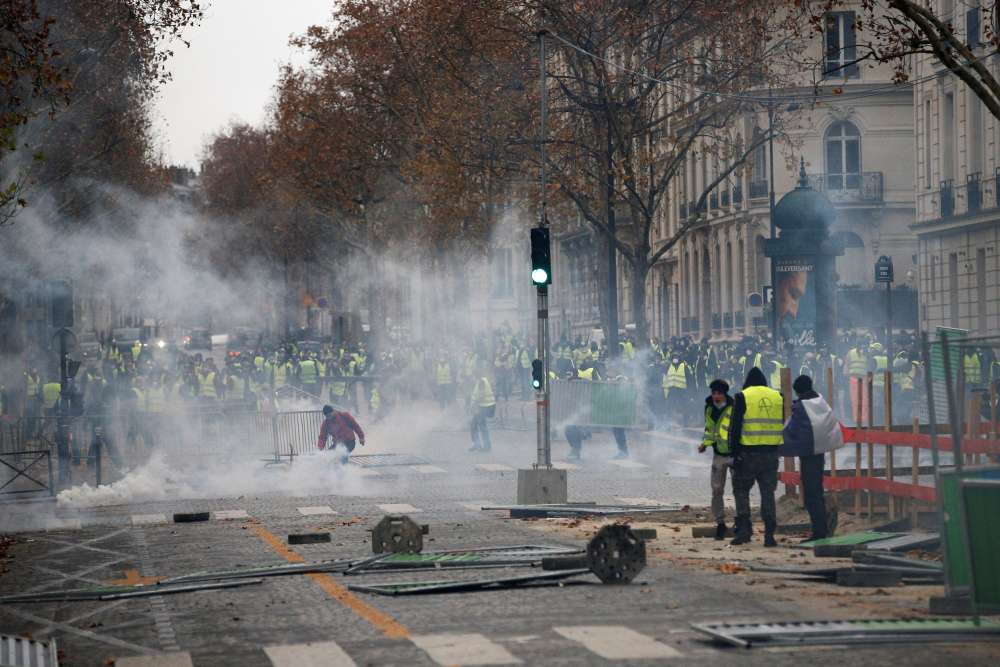 Assistant teacher Sandrine Lemoussu, 45, who travelled from Burgundy to protest peacefully, said people were fed up with Macron.

“The people are in revolt,” she said. “The anger is rising more and more, and the president despises the French. We aren’t here to smash things, but the people have had enough.”

Many on the outskirts of smaller provincial towns and villages have expressed anger, underlining the gap between metropolitan elites and working class voters that has boosted anti-establishment politics across the Western world.

“Mr Macron wrote a book called Revolution. He was prophetic because it is what he has managed to launch, but not the revolution he sought,” Far-left La France Insoumise leader Jean-Luc Melenchon told reporters ahead of a protest in Marseille.

The yellow vests get their name from the high-visibility jackets all motorists in France must carry in their vehicles. 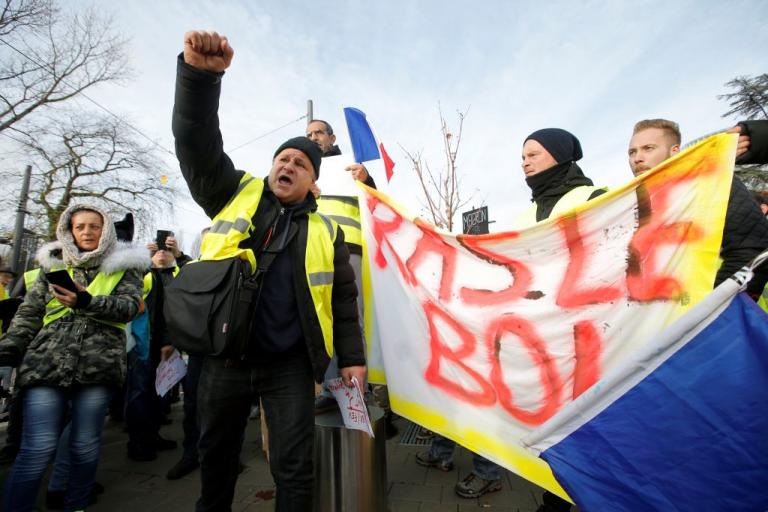