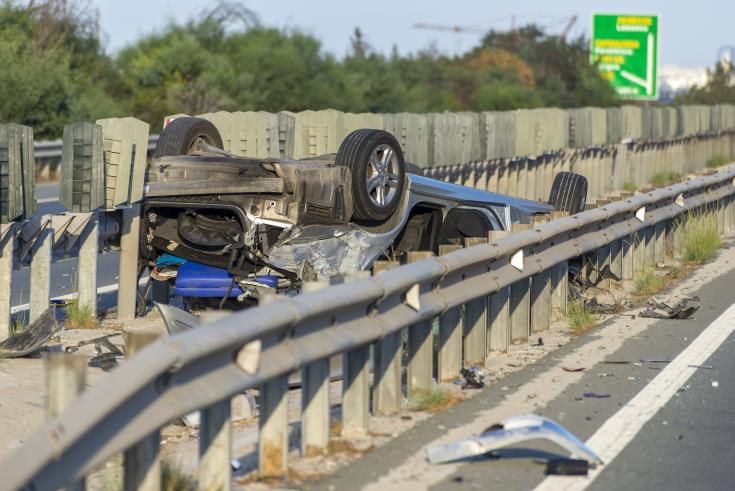 Two 11 year old girls are the latest road victims in Cyprus.
The two lost their lives in an accident that occurred early on Sunday morning on the Nicosia-Limassol highway, between the Moni and Pareklisia exits.
The two girls were in a car driven by a 40 year old woman which overturned and hit the barrier.

The 40 year old and two boys aged 14 and 15 who were also in the car sustained minor injuries.

Because of the accident part of motorway was closed to traffic for some time. It has now be given back to circulation.
Police said the 40 year old and the four children had flown back to Cyprus after an educational trip abroad and were heading to Paphos from Larnaca Airport.
Deputy Limassol police chief Philippos Papailia  said the woman appeared to have lost control of the car which crashed into the protective barrier, skidded another 60 metres and overturned.
“Unfortunately the two 11 year old girls died instantly. It appears they were not wearing seat belts. One of them was thrown out and crushed by the car, ” he said.
The driver and the two other children were trapped in the car, were freed and their condition does not appear to be serious, he said.
Papailia said that the driver and the 15 year old who was in the front sea were wearing their seat belts. Police are investigating whether the 14 year old who was in the back with the two victims was wearing a belt.
He reiterated calls to everyone to buckle up and urged drivers who feel tired not to get behind the wheel, particularly at night.
For his part, traffic police chief  Spyros Spyrou launched a dramatic appeal, saying it was time everyone realised that we were talking about human lives and it was essential to behave responsibly.
“Seat belts save lives. The issue is how many of us respect this? ” he said, adding that the police cannot perform miracles.
Noting that the police’s week long seat belt campaign had started and ended with fatal accidents, he said that some measures had been taken and it was sad to see these accidents, for the same reasons.

He said police would persevere with their  measures and appealed to President Nicos Anastasiades to intercede so that traffic cameras can  finally be installed.