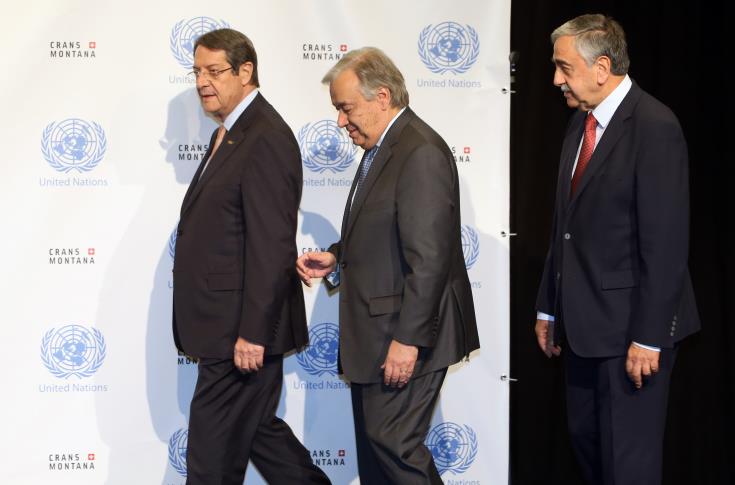 UN Secretary-General Antonio Guterres has recommended that the Security Council extends the madnate of the UN peace-keeping force in Cyprus for six more months, until July 31 2020, reiterating his commitment to explore with Cyprus President Nicos Anastasiades, Turkish Cypriot leader Mustafa Akinci and with the guarantor powers the possibility to convene an informal five-plus-UN meeting at an appropriate stage.

“In this regard, I again urge the leaders, the guarantor powers and other interested parties to make productive use of the coming period,” Guterres said in his report on UNFICYP, an unofficial copy of which was handed over on Thursday evening to the UN Security Council members.

The Security Council will be briefed by the UN Secretary General’s Special Representative in Cyprus and head of UNFICYP on January 20, while the adoption of the relevant resolution has been scheduled for January 30.

The UNSG said in his report that “during the period under review, UNFICYP continued to play a crucial role in monitoring, engagement and liaison in response to violations and low-level tensions. Its continued presence remains essential to the creation of conditions conducive to a political settlement. In recognition of the continued contribution by UNFICYP to the maintenance of peace and stability, I recommend that the Security Council extend the mission’s mandate until 31 July 2020,” he added.

He went on to say that in recent reports on his mission of Good Office he noted that the absence of a resolution of the Cyprus issue was not sustainable, “which I continue to firmly believe. The lack of negotiations since July 2017 does not mean that the situation on the island remains unchanged, both at the political level and in the buffer zone,” he noted.

Moreover, Guterres said that “as highlighted in the framework of my Action for Peacekeeping initiative, there is a direct link between the mandates of peacekeeping and good offices missions, where on the one hand the prevention of an escalation of tensions on the ground contributes to conditions conducive to advancing political solutions to conflicts, and on the other hand, progress toward a political agreement can contribute to a calmer and more stable situation. In the case of Cyprus, I note that since the closing of the Conference on Cyprus in Crans-Montana, over time, tensions on the ground have progressively increased.”

Referring to his meeting with Anastasiades and Akinci on November 25 in Berlin he noted that following their frank and focused discussions “I continue to hold out hope that a durable settlement to the Cyprus problem can be achieved. I welcome the leaders’ commitment and determination to achieve a settlement based on a bi -zonal, bi-communal federation with political equality as set out in the relevant Security Council resolutions, including Security Council Resolution 716 (1991).”

“As acknowledged in Berlin, this time must be different. I reiterate my commitment to explore with the Turkish Cypriot leader and the Greek Cypriot leader and with the guarantor powers the possibility to convene an informal five-plus-UN meeting at an appropriate stage. In this regard, I again urge the leaders, the guarantor powers and other interested parties to make productive use of the coming period,” he added and recalled the statement he made after the meeting.

With regard to the hydrocarbons issue, Guterres said that he continues to monitor developments relating to hydrocarbons closely and with concern. “I have repeatedly stressed that the natural resources found in and around Cyprus should benefit both communities and constitute a strong incentive for all parties to find a mutually acceptable and durable solution to the Cyprus problem. Bearing in mind that all parties have expressed their commitment to this objective, I reiterate my call for serious efforts to avoid any further escalation and to defuse tensions,” he noted.

“In recent months, the two sides put forward separate proposals to address the issue of hydrocarbons exploration, as noted in my report on the good offices mission of 14 November 2019 (S/2019/883). However, significant differences persist. Developments in the region during the reporting period led to a marked increase in tensions, with few prospects of subsiding,” the UNSG said.

He also referred to the Confidence Building Measures, noting that while some concrete achievements on the implementation of previously agreed  CBMs were made this past year and the sides put forward proposals and ideas about possible new measures, discussions and progress on these would need to be further pursued. “It is important that the sides continue to demonstrate their good will and make greater efforts to create conditions conducive to a successful process, renew hopes for a settlement and build a path towards sustainable peace. UNFICYP and my good offices mission on Cyprus will continue to be available to support the sides in this respect,” he added.

Guterres also noted that “in their efforts to promote closer cooperation between the communities, local non-governmental actors and those who support them continue to be confronted with challenges and obstacles linked to the status of the north and concerns relating to ‘recognition’”.

“While United Nations policy on Cyprus is maintained and decisions of the Security Council on the matter are upheld, concerns about recognition should not in themselves constitute an insurmountable obstacle to increased cooperation . As the sides explore further opportunities for confidence-building and cooperation, I urge them to devise creative ways of overcoming obstacles with a view to achieving meaningful progress and delivering tangible benefits to their communities. The United Nations remains fully committed to providing them with the facilitation and support necessary,” he noted.

He also noted that although he welcomes the parties’ stated commitment to see a military contact mechanism established, he regrets that differences in position on modalities for this mechanism could not be overcome. “I urge the parties to work with my Special Representative to establish this mechanism without delay, thereby initiating an important military confidence-building measure and meeting the expectations of the Security Council in this regard,” he added.

He also urged the parties to make a genuine effort in exploring new or enhanced avenues for cooperation on key civilian matters, including in relation to law and order, particularly in Pyla. “A notable step in the law enforcement area has been a more systematized procedure enabling the handover of third country nationals and alleged criminals from one side to another with UNFICYP facilitation. The sides should build on these initial efforts to make sure that criminals do not continue to exploit the de facto divide of the island,” he added.

Moreover he said that echoing the Security Council he urges all parties to abide by the Aide Memoire, including by respecting the no-fly zone status of the buffer zone, and by UNFICYP’s delineation of the ceasefire lines.

The UNSG also said that during the reporting period, the fenced-off city of Famagusta (Varosha) gained increased attention “due to public statements made by the Turkish Cypriot side and high-level visits organized to the closed-off area by authorities in the north.”

“The presence and movements of UNFICYP in Varosha continued to be restricted by the Turkish Forces. UNFICYP continued to use all available technologies, including satellite imagery, to enhance monitoring and reporting in this sensitive area. The United Nations continues to hold the Government of Turkey responsible for the status quo in Varosha,” he noted.