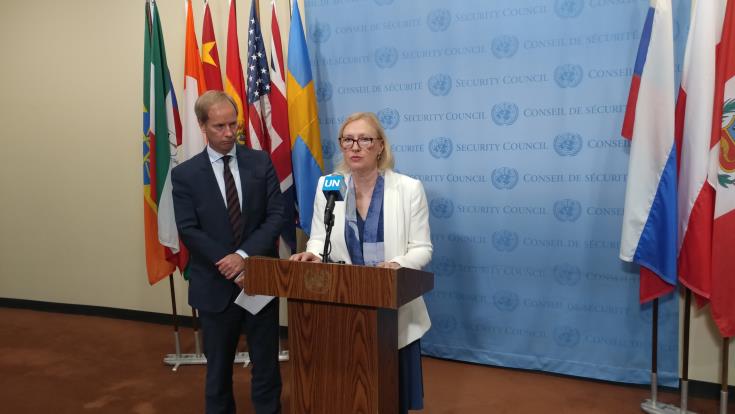 The United Nations Security Council has called on all parties in Cyprus to engage meaningfully with the UN consultations and to seize the opportunity they represent to urgently build on the progress achieved towards a Bizonal Bicommunal Federal solution to the Cyprus issue, in accordance with the Security Council resolutions.

In a statement to the press, the President of the UNSC , Swedish Ambassador Olof Skoog, said that the members of the Security Council, also called on all parties, to show real political will, and responsibility and make the necessary compromises to reach a settlement to the benefit of all Cypriots and the wider region.

The statements were made following a briefing that the members of the Security Council had by the Special Representative of the UN Secretary General in Cyprus Elisabeth Spechar. Skoog said that “we have all expressed our very strong support for her and for UNFICYP (UN Peacekeeping Force in Cyprus).”

“The members of the Council welcomed the appointment also of Jane Hall Lute, as consultant to the UN Secretary General on Cyprus settlement,”  he added. Lute is expected on the island next week and she is set to meet the President of the Republic Nicos Anastasiades and Turkish Cypriot leader Mustafa Akinci.

Skoog also said that the Members of the Council welcomed UNFICYP’s further efforts on confidence building measures, as set out in the Secretary General’s UNFICYP report, including efforts to strengthen the participation of civil society, including Women and Youth, in a future settlement process.

Meanwhile, in her statements, Spehar said that with the UNSC members they had a good exchange on the situation in Cyprus at the moment as well as the continuing role of the United Nations in Cyprus.

“I was very pleased to hear a continued expression of supports on behalf of the Security Council, for UNFICYP’s work on the ground as well as for the work of the Secretary General’s Good Offices in Cyprus. Many members of the Council also commended the work of UNFICYP, in completing almost all of the recommendations that came out of the strategic review, of the Peacekeeping Mission, that took place last year,” she said.

She added that “we cited in the Secretary General’s report a 94% completion rate of the implementation of those recommendations.”

Spehar also praised the fact that there was a unanimous welcome of the role of Jane Holl Lute, who has been appointed by the Secretary General to conduct consultations with the parties in a few days.

Replying to a question on whether the UNFICYP’s role is going to change, Spehar pointed out that we need to wait now for the Security Council to finalize the resolution, on UNFICYP and that will be happening in the next few days.

The Republic of Cyprus has been divided since the 1974 Turkish invasion. The latest round of peace talks, in July last year, ended inconclusively.