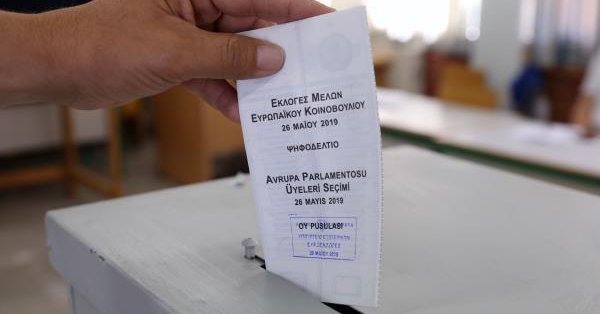 Ruling Disy emerged the biggest party in Sunday’s European elections with 29% of the vote, closely followed by left-wing opposition party Akel with 27%, according to unofficial results.

As was widely anticipated, both parties elected two MEPs each with exit polls indicating that Akel candidate, academic Niazi Kizilyurek, will become the first Turkish Cypriot to take a seat in the European Parliament.

Centrist Diko garnered 14% to retain its seat in the European Parliament.

The newly formed Dipa party of former Diko president Marios Garoyan, in its first electoral contest, polled 4%, beating an alliance of the Greens with the Citizen’s Alliance with 3%. Yiasemi,  the ticket fielded by Turkish Cypriot journalist Sener Levent, got 2%.

The official results will be announced at midnight.

Of the 81,000 Turkish Cypriots living in the occupied areas and eligible to vote, 5604 cast a ballot at one of the special polling stations set up in the government controlled areas. Though only 6.93% of the total this was more than double the 3.19% in 2014.

There were a total of 72 candidates, a record number for the EP elections — nine of them Turkish Cypriots. Besides Kizilyurek who ran on the Akel ticket, Yiasemi ticket fielded six candidate while another combination fielded two candidates.

Analysts pointed to the high abstention rate. Disy managed to weather a difficult election climate remain the biggest party, but saw a resurgent Akel closing the gap. Diko noted a rise in its strength by more than 3 percentage points.

The biggest smiles on the night came from Edek which opinion polls has shown struggling to beat far right Elam.

The party was however able to clinch the seat, boosted by what analysts said was tactical voting from voters from other political parties who wanted to block Elam.

But the latter described its showing as a success, saying it had significantly increased its electoral strength despite the war waged against it ‘by the entire political system’.