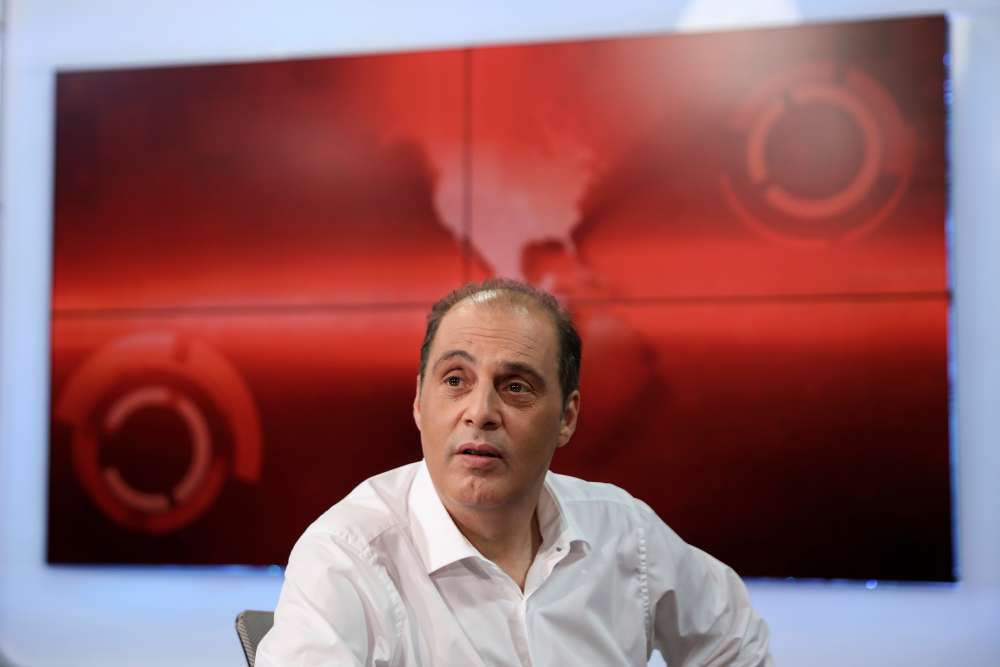 Part-time TV presenter, miracle cure salesman and budding politician Kyriakos Velopoulos wants to build a wall to keep migrants out of Greece. Lace it with mines, he says. He would also call a referendum on the death penalty for drug dealers and paedophiles.

With the country holding a general election on July 7, Velopoulos attracts a small level of support but is hoping for a repeat of the success of a May 24 election, where he won a ticket to the European Parliament, fronting a party called “Elliniki Lysi” (Hellenic Solution).

The victory was unexpected, he says, sitting in the television studio where he does most of his broadcasts from. Here he rages about all and sundry, and with equal fervour plugs herbal supplements and creams promising to cure everything from rheumatoid arthritis to clinical depression, Alzheimer’s and baldness.

“I want to be honest, I didn’t believe we could get 4.2 (percent),” Velopoulos, who is 53 and has a thinning patch, said in an interview last month.

Then he fired off his first salvo: “I haven’t learned to lie, like all politicians do, because I’m a businessman.”

From there it was an easy segue into a popular Greek complaint: the country was sold out by its politicians and its European allies as it lurched from crisis to crisis, forced into crippling austerity for bailouts, forcing thousands of Greeks to migrate and hundreds of thousands more into unemployment.

Velopoulos, decried by opponents as a right-wing fanatic, is finding a receptive audience among a small segment of voters.

Opinion polls give his party between 2.5% and 3.5% of the vote, a level that could well give it up to 10 seats and a measure of influence in the fractious Greek parliament. Opinion polls suggest Sunday’s election may not produce a clear winner although Costas Panagopoulos, head of ALCO pollsters, says the most likely scenario is that conservative leader Kyriakos Mitsotakis will win outright.

Velopoulos said his business model used natural resources to create jobs, which led him to his next dig at his political opponents. “They have never worked a day in their life,” he said.

Combining pseudoscience, conspiracy theories and nationalism, Velopoulos launched a rapid-fire narrative: Europe must remain Christian, Greece could start charging royalties for every one of its artefacts in museums around the world, and a migration wave to Greece must stop.

“First off, I would put a wall up on Evros, with mines,” said Velopoulos of the river that forms a natural border between Turkey and Greece. “I couldn’t care less what Europe says. I will protect my borders for one reason and one reason only, because I’m in danger from Turkey.”

The two countries are at odds over a host of issues from divided Cyprus to airspace in the Aegean. In 2015 and 2016, they were both on the frontline of a massive flow of migrants and refugees fleeing conflict in the Middle East and beyond.

Human traffickers are criminals like paedophiles and drug dealers whose crimes should be punishable by death, Velopoulos said.

“If I could, I would reintroduce capital punishment…I would put the sentence to the Greek people in a referendum, but the lowest it could be is life in prison.”

He rejected suggestions that his party is a softer version of Golden Dawn, a far-right party often accused of harbouring neo-Nazi tendencies and that saw its support wane in the European Parliament elections.

“I would be proud if I were responsible for the end of Nazis in Greece,” he said.