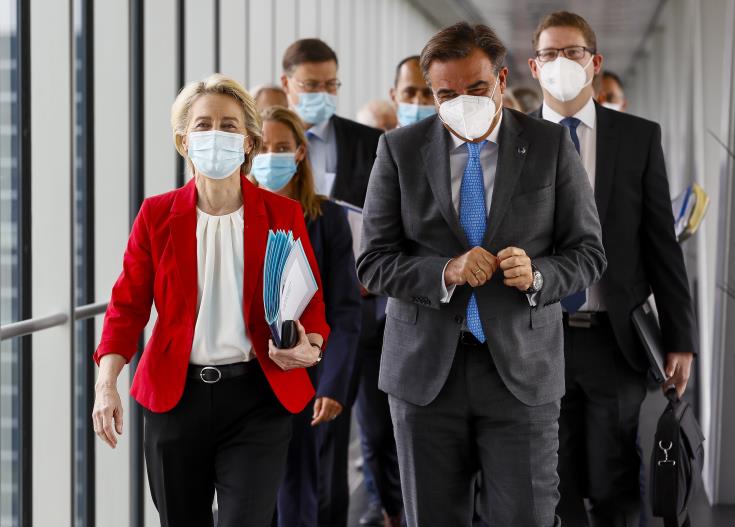 Students and academics as well as media representatives had the opportunity to watch from Strasbourg the speech of the President of the Commission Ursula von der Leyen on the State of the Union, SOTEU, at an event held by the University of Cyprus.

This is the tenth speech of the President of the Commission before the MEPs since the establishment of this annual event. Heads of the Commission Representation to Cyprus Myrto Zambarta and the European Parliament Office Andreas Kettis, participated in a dialogue and answered questions from the audience.

In a short speech the Rector said that the EU evolved through a number of steps and the visions for the promotion of peace, prosperity, freedom, democracy and security, sustainable development, non-discrimination, diversity and scientific progress, human rights and the environment.

He said that, of course, states have their own national interests, but he added that the EU must evolve as group of states and citizens with common values ​​and visions.

Christofides said that we must all realize our common values ​​and common interests and promote European citizenship. The Rector also referred to the actions of the University within the framework of its European programs, saying that it has an active participation in the vision for European unification and integration.

He added that the University participates in a network of European universities and promotes synergies with research centers, promoting a different model of higher education, investing time and resources for investments.

He also referred to the geopolitical dimension of education.

The head of the Commission Representation Myrto Zambarta said that the speech has become an institution and is a moment to assess actions and goals and to set priorities. She said the last 12 months have been difficult due to the pandemic, the financial crisis and the completion of Brexit, but stressed that there are achievements and reasons to be proud and optimistic.

The head of the EP office Andreas Kettis said that the speech is important as it evaluates the action of the Commission before the MEPs who are elected by the people and can demand answers from the Commission for its actions.

He said that we should be proud of the EU and stressed that the attractive vision the EU has achieved is more visible when once speaks with citizens of our neighboring countries and elsewhere, who want the same social development and the same level of freedoms.

Kettis said that constructive criticism is necessary because that is how we can make EU better.

Closing her speech Von der Layen presented the paralympic athlete of fencing from Italy, Beatrice ‘’Bebe’’ Vio saying that saying that after her accident and her discharge from the hospital, “Bebe” fought and won a gold medal, proving that what seems impossible can become possible and that was the vision of the EU fathers.

She invited everyone to draw inspiration by the young woman and to give a vision to our young people about what is possible and that you can become whatever you want and achieve whatever you set your mind on.

Following the speech a dialogue took place and attendees had the chance to raise questions.

In the comments and dialogue that followed the speech, the President`s goals and achievements were analyzed and questions were asked, among others, about the Green Agreement, migration and the Afghan crisis and the new pact on migration and asylum, the environment, the pandemic management and the EU`s role on the world scene.

Particular emphasis was placed on the goals of investing in the digital future and on health, the green economy and Von der Leyen`s statement that the EU will not leave the Afghan people alone. Reference was also made to the decision to make 2022 the year of European youth.

On the pandemic it was said that at the beginning of the health crisis the Commission made recommendations and continues to do so and that it is up to the MS to take action and decide on measures.

Regarding the environment and the fact that Cyprus does not seem to take special measures and prefers to pay fines rather than implement EU decisions and directives, it was pointed out that there is a lack of vision and political will and the fact that the responsibility and commitment of Ministers and other officials is not regulated via law as in Greece.

It was also said that there should be pressure from voters for changes they want to see. The principle of solidarity and fair burden sharing were also pointed out as regards the migration crisis.