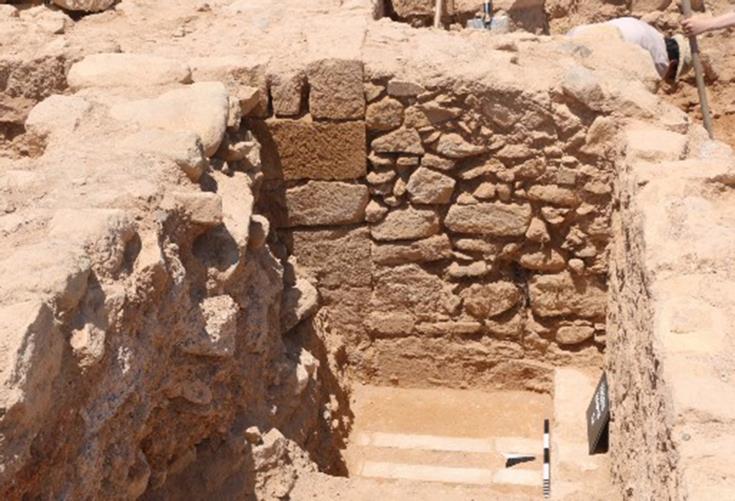 Α complex architectural unit which was constructed at the beginning of the 5th century BC by the Paphos royal dynasty has been uncovered during excavations carried out this year at the Hadjiabdoulla plateau by the University of Cyprus.

The Department of Antiquities announced the completion of the University of Cyprus’ 13th field project at Palaiaphos, under the direction of Professor Maria Iacovou. The 2018 excavations took place between May and July and focused on the plateau (citadel) of Hadjiabdoulla, one kilometre east of the sanctuary of Aphrodite.

“According to the results of the Ancient Pafos landscape analysis project, which has been running since 2006, the Hadjiabdoulla plateau was the administrative-economic centre (i.e. the acropolis) of Ancient Paphos during the Cypro-Classical period”, the Department of Antiquities said in a press release.

“Along the Northern side of the plateau, the archaeological mission of the University of Cyprus has identified and is investigating a complex architectural unit, which was constructed at the beginning of the 5th century BC by the Paphos royal dynasty, within the context of its economic administration” the Department noted.

The unit’s production and storage facilities are located in corridors that develop outside the acropolis walls. Up to now, 65 metres of the fortification wall have been revealed, as well as six different units and communication corridors.

In Units 3 and 4 investigations have confirmed the production of olive oil. Unit 1 mainly served as a storage area, since large quantities of local and imported amphorae (mainly wine amphorae) were found in this area, reflecting the extent of the trade networks maintained by ancient Paphos in the Cypro-Classical period (end of the 6th century BC) with Carthage, Egypt, the coast of modern-day Lebanon, Syria, the Aegean (Thasos, Kos, Mende, Rhodes and Chios) and the coast of Asia Minor (Ephesus, Samos, Miletus), especially from the 4th to the 2nd century BC.

The aim of the 2018 excavations was to complete investigations in Units 2, 5 and 6, as well as of the corridor in the east, which communicates with these.

Large quantities of murex shells were collected from the entire surface area of Unit 2.

Units 5 and 6 to the North, are part of an industrial installation, which is situated between two parallel retaining walls, under which stone pipes have been excavated, which lead to a stone bathtub in Unit 6. Due to the lack of macroscopic data from the pipes and the bathtub, it is not yet certain what these monumental installations were producing.