Unite Cyprus call for release of demonstrator, opening of checkpoints 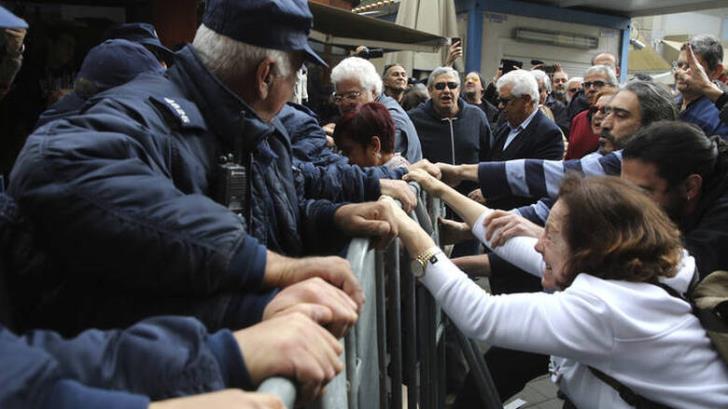 Unite Cyprus on Sunday asked for the immediate release of a 55 year old man arrested for allegedly assaulting a national guard soldier, saying that a single moment of tension was being used to demonise an entire peace movement.

The statement came as Nicosia district court agreed to a police request to remand the man in custody for two days. He is under investigation for assaulting a soldier and for unlawful assembly and creating a disturbance.

The man was among dozens who pushed aside barricades erected at the Ledra Street checkpoint following a government decision to close four checkpoints for a week to prevent an outbreak of coronavirus.

The demonstrators, who made it into the buffer zone where they were joined by Turkish Cypriots, say that coronavirus is being used as a pretext to hamper contact between the two communities.

This is denied by the government which counters that the measure is temporary and aims to protect public health.

In an announcement on behalf of the organisations which supported yesterday’s protest, United Cyprus spoke of an “:historical day when Cypriots peacefully demonstrated and brought down the iron barriers that were put in the heart of the divided capital on the basis of false arguments.”

And it added: “Hundreds of Cypriots, young and old, men and women made it clear that they will not tolerate restrictions on their freedom to travel in their own country after having experienced wars, fences, division and pain for far too long. The closing of four crossing points and the implementation of measures on remaining that resulted in excessively long queue proved that the new arrangements had nothing to do with the spread of coronavirus.”

The statement spoke of an act of civil disobedience by peaceful European citizens against the curtailment of their rights; violation of the European  (Green Line) regulation and an arbitrary decision of the government.

“The protest started and ended peacefully. Nobody was hurt, no damage was done. Despite this, a single moment of tension between the protester and a young recruit has been picked in order to demonize the entire peace movement and silence the ordinary citizens acting to defend our rights. The protester who reacted at the heat of the moment apologized to the recruit as can be seen from the video records. He voluntarily went to the police station to give a statement and was charged on two accounts as a sign of government’s intention to spread fear among the people who simply ask for their rights to be respected,” the statement said.

And it added: “We request immediate release of the protester. We ask the government to take immediate measures for the protection of him and his family who have been subjected to online harassment and threats.

“We ask the European Commission to intervene immediately to protect its own Regulation as well as the democratic rights of the European citizens for peaceful assembly.”

It also questioned why the army was ordered to do the job of the police.

“The government is waging a media war in order to avoid taking responsibility for the mess they created. Yesterday people were stuck for hours at the crossing points due to yet another arbitrary decision to introduce identification control and registry at the Agios Dometios/Kermia crossing point, a measure that does not in any way protect against the spread of coronavirus,” it said.

The organisations called on the government to open all crossing points immediately and cancel any new measures that are introduced to harass people at the crossing points.

“We further call on the leaders of the two communities to meet and examine the progress on the measures that they had taken at their previous meeting and assess the results ensuring that both communities are properly and genuinely protected against the spread of coronavirus. We call on all Cypriots to resist against all measures that deepen the divide and constitute a step towards the final and permanent partition of our country,” it concluded.

By In Cyprus
Previous articleDivided over Turkey, EU left scrambling to respond as migrants reach borders
Next articleGovernment says no ulterior motives behind temporary closure of 4 checkpoints