UNGA adopts resolutions on the oceans and seas 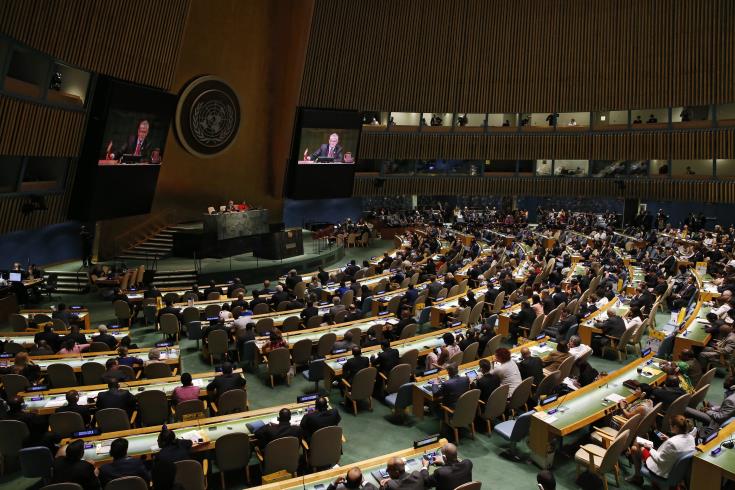 The UN General Assembly has adopted two resolutions on the oceans and seas linked to implementation of the landmark 1982 United Nations Convention on the Law of the Sea, with Turkey being the only UN member state voting against.

With the resolution “Oceans and the law of the sea” (document A/74/L.22) — adopted by a recorded vote of 135 in favour to one against (Turkey), with three abstentions (Colombia, El Salvador, Venezuela) — the UNGA called on states that have not done so to become parties to the Agreement for the Implementation of the Provisions of the United Nations Convention on the Law of the Sea.  It further called on them to harmonise national legislation with the Convention, and for capacity-building initiatives to consider the needs of developing countries.  It also urged all States to combat piracy and armed robbery at sea and ensure freedom and safety of navigation.

The General Assembly also adopted a consensus resolution, titled “Sustainable fisheries, including through the 1995 Agreement for the Implementation of the Provisions of the United Nations Convention on the Law of the Sea of 10 December 1982 relating to the Conservation and Management of Straddling Fish Stocks and Highly Migratory Fish Stocks, and related instruments” .

Cyprus’ Permanent Representative to the UN Andreas Mavroyiannis said in a statement that “we regret that a vote was requested once again, in a futile attempt to question the UNCLOS as the Constitution of the Oceans and the indisputable legal framework for all activities in the oceans and seas.”

“My delegation would like to stress once more that the Convention represents a carefully crafted balance among the rights and interests of all states in spite of their specific characteristics. No state can continue requesting special treatment or denying rights of other states, such as island states or states comprising islands. Article 121 of UNCLOS has definitely put an end to such claims,” he noted.

“Such arrangements have no legal effects, nor do they affect the status of the UNCLOS as the sole pertinent universal legal framework on the delimitation of maritime zones codifying international law. Upholding the integrity of the Convention is the collective responsibility of all of us,” he noted.

Th Representative of Greece also expressed regret that a vote was requested again in an attempt to challenge the Convention’s preeminent role and universal character.  “By establishing the legal framework within which all ocean and sea activities must be carried out, the Convention promotes legal stability and helps to maintain global peace and security,” he noted.

He went on to say that “international jurisprudence has long accepted that its provisions either embody or reflect customary international law.  The 2019 omnibus resolution has particular significance, marking the twenty-fifth anniversary of the Convention’s entry into force.  It is imperative that the international law of the sea, the principles of good neighbourly relations and both the sovereignty — and sovereign rights — of all States over maritime zones, including those generated by islands, are respected.  All members of the international community must abide by these principles and should refrain from any actions that undermine regional stability and security,” he added.

By Bouli Hadjioannou
Previous articleCyprus Airways to launch Larnaca-Rome flights in summer 2020
Next articleBudget approval allows the state to continue on the path of economic stability, FinMin says