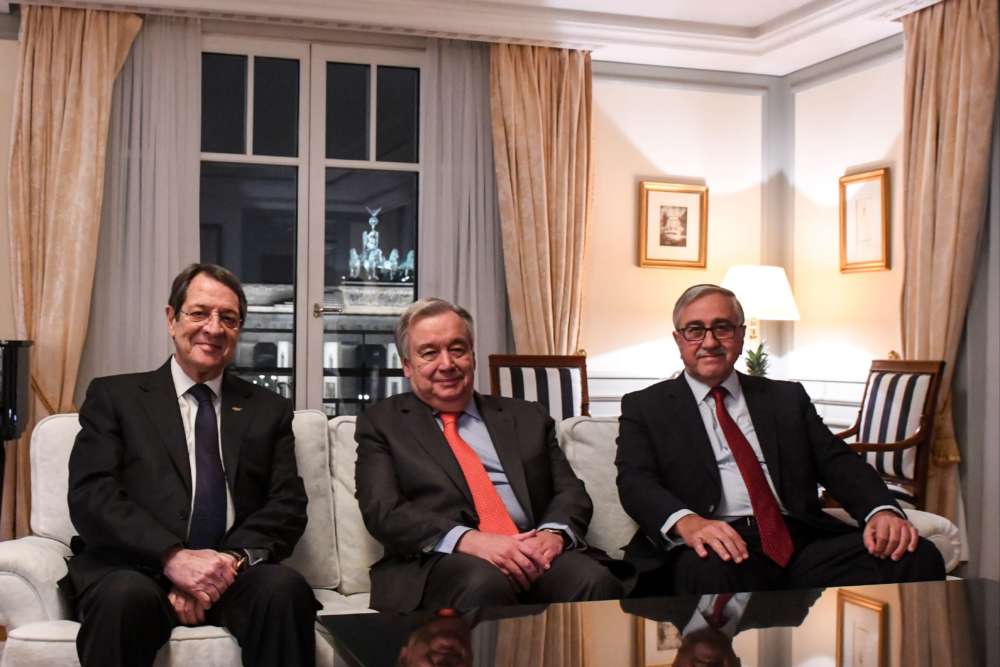 UN Secretary-General Antonio Guterres has said he is committed to explore with the President of Cyprus Nicos Anastasiades, the Turkish Cypriot leader Mustafa Akinci and the guarantor powers the possibility to convene an informal five party meeting on Cyprus “at an appropriate stage”, following an informal dinner in Berlin attended by both leaders.

In a statement issued after the end of the 2.5 hour-long dinner, in the German capital, Guterres also notes that the leaders of Cyprus affirmed their commitment to the Joint Declaration of 11 February 2014, the prior convergences, and the six point framework he presented on 30 June 2017 “with a view to achieve a strategic agreement paving the way forward for a comprehensive settlement.”

He goes on to say that both leaders welcomed his engagement and reaffirmed to him their commitment and determination to achieve a settlement based on a bi-zonal, bi-communal federation with political equality as set out in the relevant Security Council resolutions, including paragraph 4 of UN Security Council Resolution 716 (1991).

“The Turkish Cypriot leader and the Greek Cypriot leader, motivated by a sense of urgency, agreed that achieving a comprehensive and durable settlement to the Cyprus problem within a foreseeable horizon is of utmost importance to the future well-being of both communities and that the status quo is unsustainable,” Guterres says.

He also notes that the Greek Cypriot leader and the Turkish Cypriot leader affirmed their commitment to the Joint Declaration of 11 February 2014, the prior convergences, and the six point framework I presented on 30 June 2017 with a view to achieve a strategic agreement paving the way forward for a comprehensive settlement.

“In view of these discussions, I have agreed to extend my efforts to achieve terms of reference to serve as a consensus starting point for phased, meaningful, and results-oriented negotiations at the earliest feasible opportunity. In this regard, I committed to explore with the Turkish Cypriot leader and the Greek Cypriot leader and with the Guarantor powers the possibility to convene an informal five-plus-UN meeting at an appropriate stage. It is acknowledged that this time must be different” the Secretary-General notes.

He thanks finally the government of the Federal Republic of Germany for its support in facilitating the meeting in Berlin.