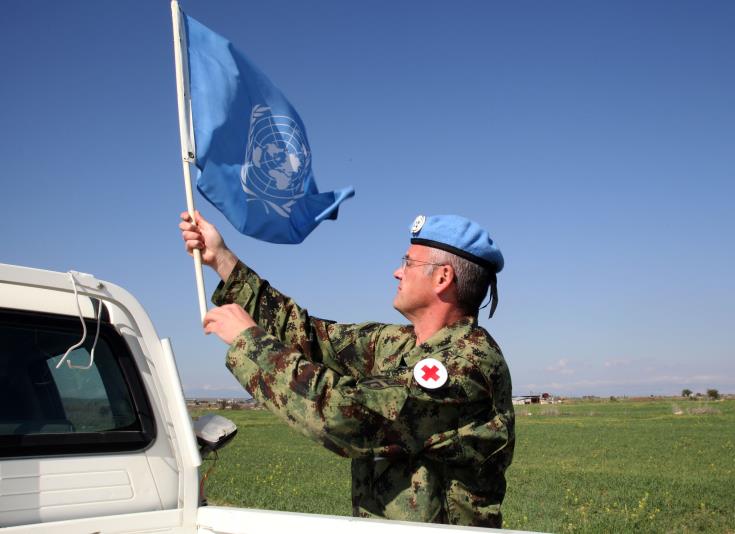 The United Nations Peacekeeping Force in Cyprus (UNFICYP) has investigated the recent actions by the Turkish occupying army in Strovilia and has officially recorded that these actions represent new violations of the military status quo in the area. UNFICYP has made demarches to the Turkish occupation forces, according to a press release issued by the Ministry of Foreign Affairs on Saturday, following press reports on the matter.

The MFA says that the government is closely monitoring the situation and is in constant consultation and cooperation with UNFICYP which is working towards lifting the violations in order to fully restore the status quo in the region.

According to the press release, on February 1st, the Turkish army, citing undocumented trafficking allegations in the area, placed railings on a rural road, preventing the access to residents who use this road in order to get to their crops.

The Turkish army, the press release reads, advised the residents of Strovilia that new “procedures” would be introduced when leaving Strovilia and on their way to the British Bases.

Moreover, the army introduced new controls on those visiting Strovilia, including members of the peacekeeping force, at the area which is by the border of the British Bases.

The government, as the press release points out, has made representations to the peacekeeping force in Cyprus, to the UN Secretariat in New York as well as to the members of the United Nations Security Council.

He added that  “UNFICYP will continue to engage and to monitor closely the situation in Strovilia”.

Siddique noted that the peacekeeping force “recalls that military positions established by the opposing forces in violation of the status quo in Strovilia are classified by the UN as permanent violations”.

Earlier on, the British High Commission in Nicosia posted a statement on its account on twitter, saying that “in recent days there has been media speculation about developments at #Strovilia at the boundary with the Eastern Sovereign Base Area (SBA). A barrier has been erected as a temporary measure on the SBA side of the boundary stone to prevent smuggling & the avoidance of customs checks, in line with our duties under the Green Line Regulation”.

“We are content Cypriots in the area of #Strovilia are able to continue with their lives unhindered, without additional restrictions, including travel through the SBA”, it concludes.

The Republic of Cyprus has been divided since 1974 when Turkish troops invaded and occupied 37 per cent of the island’s territory.