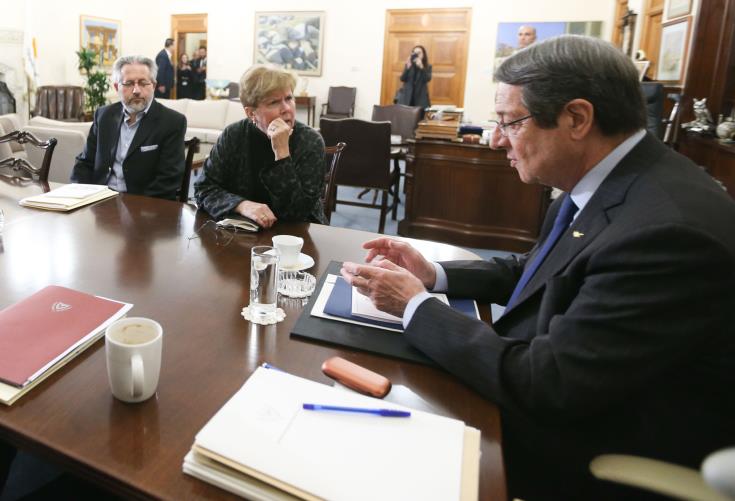 UN envoy on divided Cyprus Jane Holl Lute kicks off a new round of reunification talks in Nicosia on Tuesday with a morning meeting with President Nicos Anastasiades. And an afternoon one with Turkish Cypriot leader Ersin Tatar.

Lute arrived in Cyprus on Monday evening ahead of a scheduled meeting between Anastasiades and UN Secretary-General Antonio Guterres later this week in Brussels on the sidelines of the European Council summit.

The President is expected to stress that efforts for new talks should focus within the framework of agreed UN resolutions – something that the Turkish side opposes.

Lute’s first meeting on Tuesday is with UN Special Representative, Elizabeth Spehar, and her mission this time is to see if there is any common ground to build on.

As things stand there is no possibility that she will recommend Guterres to call a new conference on Cyprus.

Anastasiades will meet Guterres for the first time since the 5+1 informal meeting on Cyprus that took place in Geneva at the end of April.

The summit had failed to find common ground as a basis for new negotiations on Cyprus which is divided since a 1974 invasion by Turkey which still maintains troops in the breakaway north.

Tatar has said he will tell Lute that formal negotiations on Cyprus can only take place on the basis of “equal international status and sovereignty”.

Lute is due to leave the Mediterranean island on Wednesday.