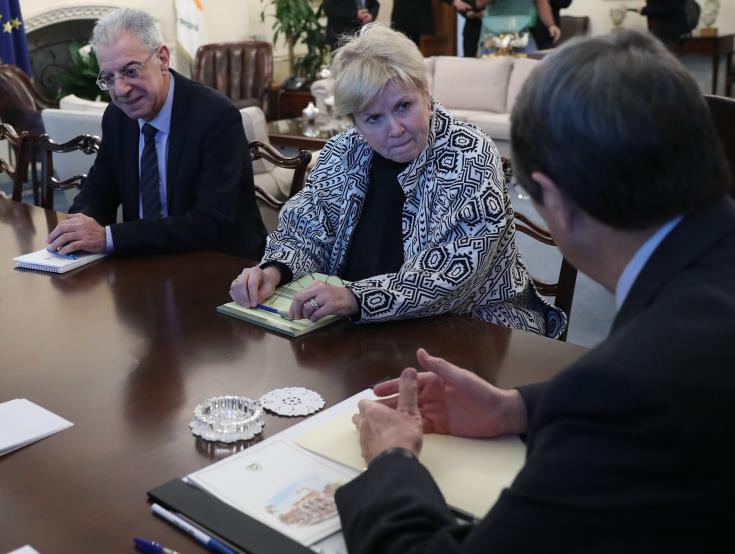 UN Secretary General`s special envoy, Jane Holl Lute, is meeting separately, on Sunday, Cyprus President Nicos Anastasiades and Turkish Cypriot leader Mustafa Akinci, as part of efforts to reach an agreement on the terms of reference, which would pave the way for the resumption of peace talks.

President Anastasiades meets Lute, at the Presidential Palace, in the morning. Akinci will see her in the afternoon.

Lute, who arrived in Cyprus on Saturday, was expected to consult, before her meetings with Anastasiades and Akinci, with the UNSG`s Special Representative in Cyprus, Elizabeth Spehar, and the UN mission`s team on the Cyprus problem.

It is expected that after Lute`s meeting with Akinci this afternoon, it will become clear whether the UN official will seek to have further meetings with the two leaders on Monday, before her departure.

The UN official is set to depart from Cyprus on Monday evening.

Cyprus has been divided since 1974, when Turkey invaded and occupied its northern third. Repeated rounds of UN-led peace talks have so far failed to yield results. The latest round of negotiations, in the summer of 2017, at the Swiss resort of Crans-Montana, ended inconclusively.

By In Cyprus
Previous articleFormer minister Gauke to meet PM Johnson Monday to hear his Brexit plan
Next articleMet Office: Temperatures to fall in the next three days