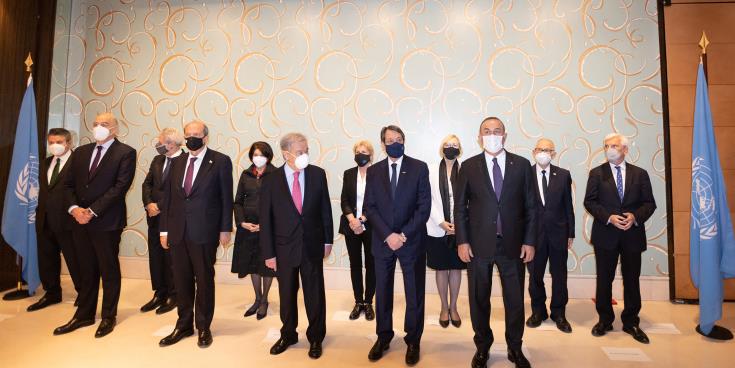 UN Secretary General Antonio Guterres has asked parties participating in the 5+1 informal meeting on divided Cyprus in Geneva to reflect before a new plenary session on Thursday morning.

His pledge came shortly after Turkish Cypriot leader Ersin Tatar tabled his unacceptable proposal for a two-state solution to the protracted conflict.

“Of course I have told the Secretary-General that our attempt was to create a positive climate, without provocations, without any references to whatever unacceptable (things) we heard.

“I have also told the Secretary-General that we will submit, in writing, our own positions.”

The Mediterranean island was split in 1974 after an invasion by Turkey which still maintains troops in the northern part of the EU-member island.

The UN chief invited the leaders of the two communities in Cyprus as well as the foreign ministers of guarantors Turkey, Greece and Britain to attend the Geneva-based talks this week in an effort to revive formal peace negotiations that collapsed in mid-2017.

The UN and all involved parties, except Turkey, want the reunification of the island to be based on the international organisation’s resolutions and high-level agreements.

At the same time, Guterres said he wanted to listen to their final positions so as to decide on the way he would handle the situation, according to insiders.

One also noted that Guterres who was hoping the informal meeting would pave the way for a new round of reunification talks to resume has cancelled bilateral talks scheduled for Thursday.

Peace talks kicked off on Tuesday and will run until Thursday evening.

By Annie Charalambous
Previous articleMostly sunny and warm on Thursday, thin dust in the air
Next articleDiscredited former parliamentary speaker along with ex MP opt to remain silent before inquiry board