UK wants to further strengthen ties with Cyprus after Brexit 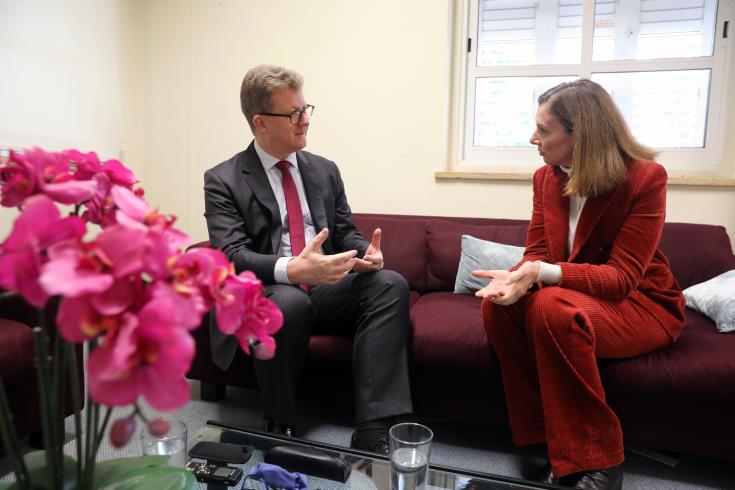 An ambitious agreement with zero quotas and zero tariffs in trade with the EU until the end of this year is the goal for the United Kingdom which is leaving the European Union after 47 years, today, Friday, at 11 pm, UK time.

Brexit is the first ever exit of a member state from the EU. In an interview with Rallo Papageorgiou of the Cyprus News Agency, British High Commissioner in Cyprus, Stephen Lillie explains what will happen next, what applies for Cypriot and British nationals living in both countries and underlines the deep historical relationship and the links and interconnectedness between the two countries. The UK, he says, is looking forward to strengthen them even more after Brexit.

Lillie describes UNSC’s resolution for UNFICYP as a good, balanced one, stresses that after Brexit his country will continue to support a bizonal, bicommunal federation solution with political equality and expresses the view that soon after the “elections” in the Turkish Cypriot community in April, a 5+1 meeting for Cyprus should be held. “We are strongly opposed to Turkey’s drilling in Cyprus’s internationally agreed EEZ and we want to see a de-escalation” he adds.

Brexit
———
“We are leaving the EU on Friday 11 pm and we will be a full independent, sovereign state. We will be very active on the world stage as a liberal free trading nation, a nation that stands for the rules based on the international system for human rights, for western values,” he says.

As such, he adds, “we will continue to have a close relationship with the EU but it will be a relationship between sovereign equals.”

The first thing the UK wants to do is to open negotiations with the EU on their future partnership and “in the heart of that will be an ambitious free trade agreement with zero quotas, zero tariffs, but nevertheless outside the single market and customs union.”

Lillie also says that the UK wishes to reach an agreement with Europe on issues of common interest such as security and foreign policy.

“It is very important to recognise that we are leaving the EU, the organization and the institutions, but we still are a very much European country in terms of geography, history, our culture and values,” he stresses.

He expresses the UK’s intention to “work very closely with the European countries like we do with other friends and partners around the world, USA, Australia, Canada, Japan.”

According to the British High Commissioner, the period until the end of 2020 is one of transition. The UK, he says, wishes to continue to trade freely with its European neighbours.

“In particular for Cyprus that means you can continue to export your goods, 46% of halloumi to the UK,” he says.

He continues noting that “we want to have agreements on services because obviously there is a huge level of interconnectedness between the legal, accounting and other professional service sectors between UK and Cyprus”.

Lillie acknowledges that the EU has a lot of free trade agreements with countries around the world, “but we want it to be even more ambitious.”

He expresses the view that “it is possible to have a zero tariffs regime with the EU.”

He further clarifies that until the end of this year they continue to follow EU rules, including the single market and customs union. Therefore, he explains, Cypriot goods will continue to flow into the UK as they do now, without tariffs, noting that whether there is a tariff or quota at the end of this year, depends on the EU and whether the EU agrees on zero tariffs, zero quotas.

He recalls the online settlement scheme in place in the UK for EU nationals, adding that more than 9,000 Cypriot nationals have registered.

“They have until the end of June next year to do that registration and then they can continue live, work and study in UK with all the rights they currently have, including access to the NHS,” he says.

Regarding temporary visits, tourist or business trips, Cypriots will also continue to travel using their identification card and using the UK and EU channels in the airports. The UK, he assures “is an open globally minded nation, so we will not put the shutters down”.

Referring to British nationals living in Cyprus, Lillie says that there are 70,000 residing in the area of the island controlled by the government and 13,000 in the Turkish occupied north part of the island.

British nationals residing in the areas under the control of the Republic of Cyprus are covered by the withdrawal agreement and before the end of this year they have to ensure that they will be registered as residents by having a MEU 1 or MEU 3 residence card issued by the Interior Ministry, he explains.

They will continue coming in and going out of the island without restrictions and have access to new national health plan, known as GESY, just like the other residents of Cyprus, he adds.

For those living in the Turkish occupied areas of Cyprus, Lillie explains that they are not covered by the withdrawal agreement, noting that until the end of this year there is no change and they can come and go from the island freely and cross the green line. However, what will happen after the end of this year is less clear as the government of Cyprus has been drawing up proposals on how to implement the green line regulation in the future, he says.

“We think the current arrangements work perfectly well,” he notes.

“British nationals are crossing the green line in either direction so we see no reason why that needs to change,” he says expressing the hope that “the government of Cyprus will have the same view.”

Referring to Cypriot citizens living in the British Bases in Cyprus, Stephen Lillie explains that there is no change because they are covered by the protocol to the withdrawal agreement.  EU rules will continue to apply there and BB will a part of customs union, he adds.

In relation to UK university fees for Cypriot nationals, he says that students who will start studying in the UK this academic year, September – October 2020, will enjoy the present status. However, he notes that “at the moment we don’t know what the position is for next year” (2021 – 2022).

The relationship between Britain and Cyprus predates the participation of the two countries in EU. Lille adds. “There are so many connections between the UK and Cyprus based on the history, people to people links, on the legal system, the institutions, the language, the love of Cypriots for British education, the love of British people for Cyprus’ beaches,” he says.

All these things, he points out, are not affected by the departure from EU. “I am very confident that the relationship between the two countries is going to continue to develop and get stronger and stronger,” he adds.

The British High Commissioner continues saying that the relationship between the UK and Cyprus is “very important and it should be a forward-looking one, thinking about the areas we can do more things together, like education and science.” He further recalls that there are already great collaboration programs in place between British and Cypriot universities.

At the same time, he expresses the view that there is more we can do together on security, recalling that joined exercises between the British Forces, the Cypriot National Guard and the Jordanian army have taken place. “There is a huge agenda not affected by Brexit,” he adds.

Cyprus problem
——
The UK will continue, ever after the withdrawal from the EU, to support strongly a resolutionof the Cyprus problem and work for that, Stephen Lillie stresses, adding that Cyprus problem has always been an element of the instability in the Eastern Mediterranean region and underlining particularly the tension around the hydrocarbons exploration.

The UK works with the UN for a solution based on a bizonal, bicommunal federation with political equality, he added.

Invited to comment on the “new ideas, new proposals” some people refer to, Lillie said that “the fundamental blueprint for the solution is already there”, it is the Bizonal, Bicommunal Federation.

A lot of the basic ground work has been done before and during a Conference on Cyprus at the Swiss resort of Crans – Montana in 2017. There are “points of detail” to be filled in, he adds and speaks of “a big opportunity after the Turkish Cypriot elections for the resumption of negotiations in the context of “a 5 + 1 meeting that should take place as soon as possible after the elections.”

Ultimately the only way to resolve Cyprus problem is through negotiations, he points out.

UNFICYP
—-
The resolution for UNFICYP is “a good, balanced one that hopefully (will) support the work of UNFICYP on the island and help to move things forward”, according to Lillie.

But let’s remember, he says, “the resolution is only good as the implementation.” “The issue now is what the different involved parties are going to do to implement the resolution,” he adds.

Asked to comment on views questioning the procedure of the re-examination of the status of UNFICYP every six months, Stephen Lillie says that UNFICYP plays a vital role in Cyprus.

“The situation in Cyprus is fundamentally unstable, having armed forces opposing each other across the island,” he notes.

“We have seen a range of things happening over the past year which reinforce the value of UNFICYP. But nobody should take UNFICYP for granted,” he warns.

At the same time, he points out that UNFICYP is not the solution to the Cyprus problem and that is why we have to examine its work.

“At the moment we do that every 6 months. That’s the arrangement for a long time,” he recalls.

The Turkish Cypriot community cannot be part of the negotiations for the UN resolution because they are a community, not a member of the UN but both sides feed in their views and their views are very clear to the UNSC, Lillie says replying to a question.

Direct flights and trade
———–
Asked to comment the demand of some Turkish Cypriot politicians for direct flights to the Turkish occupied areas he explains that this has nothing to do with Brexit.

“The obstacle to that is with the International Civil Aviation Organization and the Montreal Convention and legal constraints and that won’t change when we leave the EU,” he says.

Referring to a demand on direct trade between Turkish Cypriot community and the UK, the High Commissioner says that he doesn’t know what the Turkish Cypriots propose about that but that the UK’s priority at the moment is to negotiate a free trade agreement with the EU as well as with USA and other major trade partners.

Turkey’s drilling operation
——–
Asked to comment on Turkey’s latest action to proceed on drilling operations in block 8 of Cyprus’ Exclusive Economic Zone (EEZ) and whether he was expecting it, Lillie says that Turkey, since the outset of Cyprus’ drilling program, has said that “she is going to take counter measures and has followed through those, obviously the precisely ones.”

“We strongly oppose to Turkey’s drilling in Cyprus’s internationally agreed EEZ and we want to see an end to that, a de-escalation of tension,” he stressed. “In the end, the best way to resolve the dispute of the hydrocarbons is to resolve the over all of Cyprus problem,” Lillie adds.

By In Cyprus
Previous articleFamagusta: Poacher fined €9,300
Next articleCyprus University of Technology: Shaping the future together