UK says aims to boost exports to 35 pct of GDP, gives no timeframe 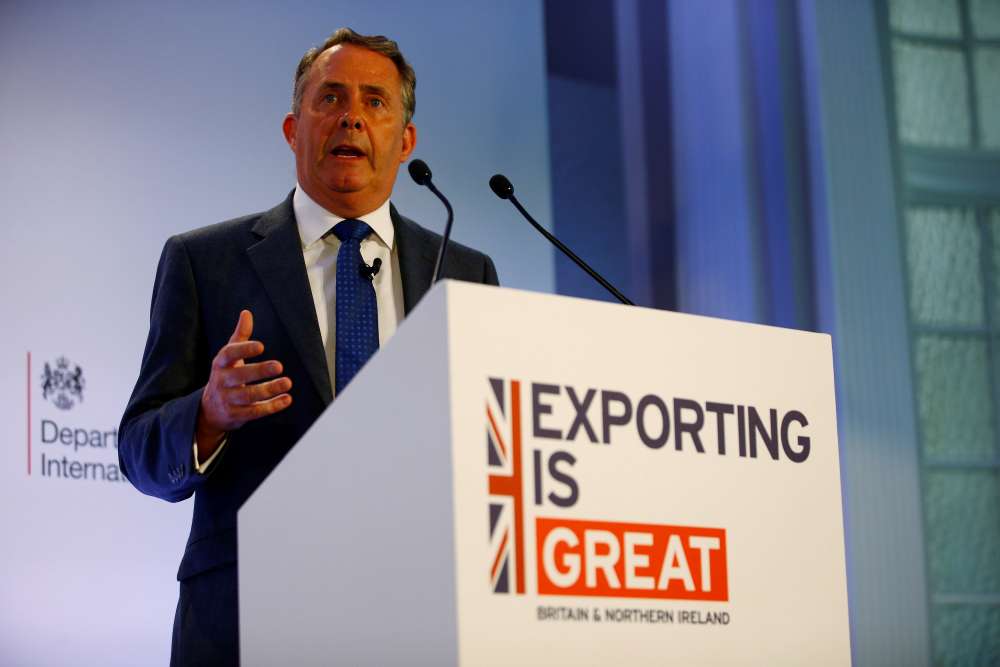 Britain aims to boost exports to 35 percent of gross domestic product after leaving the European Union as it looks to increase trade ties with the rest of the world, its trade minister said on Tuesday, but he gave no timeframe for reaching the target.

The Department for International Trade, set up after the 2016 Brexit vote, estimates that 400,000 businesses believe they could export but don’t. It said last year goods and services exported by British companies accounted for 30 percent of GDP.

“Brexit is not the occasion to ‘pull up the drawbridge’ but to embrace the opportunities that the changing pattern of global trade presents,” British trade minister Liam Fox told a business audience in London, setting out a new export strategy.

“We must raise our ambitions, widen our horizons and expand our timescales. Europe is and will continue to be an important market for our goods and services, but there is a world beyond Europe and a time beyond Brexit.”

Around 90 percent of global economic growth in the next 10 to 15 years is expected to be generated outside the EU, he said.

The government said better use of Britain’s overseas diplomatic network, online tools and promotion of export finance support available from government would be among the measures put in place to encourage more businesses to export.

But some criticised the strategy as lacking detail.

“The government’s Export Strategy is strong on aspiration… However, it’s concerning to see a lack of definitive, detailed interventions,” said Mike Cherry, national chairman of the Federation of Small Businesses.

In 2012, then-finance minister George Osborne planned to double exports to 1 trillion pounds ($1.28 trillion) by the end of the decade — a figure that Britain looks likely to miss by a few hundred billion pounds.

The EU, which comprises 27 other countries, is the United Kingdom’s largest single trading partner and accounted for 44 percent of exports in 2017.

Supporters of Brexit say one of its benefits will be the freedom to strike new trade deals independently of the EU. Opponents of Brexit argue that Britain won’t have the same negotiating clout on its own as it did within the EU.

Fox, a prominent Brexit supporter, has spent much time over the last two years touring the globe promoting the merits of post-Brexit Britain as a trading partner and holding preliminary talks ahead of possible future trade negotiations.

Talks on Britain’s divorce from the EU resume on Tuesday. Earlier this month Fox put the odds of a ‘no deal’ Brexit at 60-40, blaming “intransigence” on the EU’s part.

“We don’t want there to be no deal, we want there to be a good deal for the United Kingdom,” Fox said on Tuesday. “It is within our grasp but it requires both sides to understand the opportunities of doing so and the costs of not doing so.”

By In Cyprus
Previous articleTsipras declares “day of liberation” after Greece exits bailout
Next articleMan pays €7,000 for smuggling tobacco from occupied north