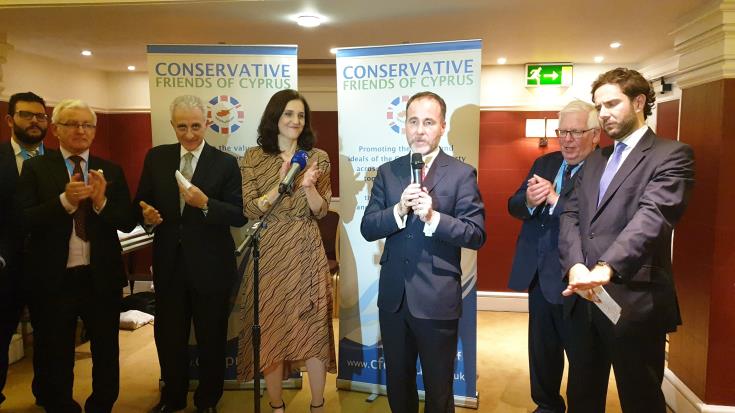 The UK Minister for Europe Christopher Pincher has told the Cyprus News Agency that the British Government will continue supporting the efforts towards a negotiated settlement of the Cyprus issue.

The minister’s statement followed yet another well-attended ‘Conservative Friends of Cyprus’ reception on the sidelines of this year’s Conservative Party conference, which began on Sunday in Manchester.

“Britain stands ready to help resolve what has been a very difficult, a very personally difficult, intractable situation over 40 to 45 years. We want to de-escalate the situation, we want to play our part in making sure that the issue is resolved. And you can be absolutely certain that the talks Alan Duncan, my predecessor, held a few years ago are talks that we want to continue with both sides, to make sure that this terrible, intractable difficult issue is resolved,” Pincher told this Agency.

The reception was opened with remarks by the Secretary of State for the Environment, Food and Rural Affairs Theresa Villiers, who was also the host of the event in her capacity as President of the Conservative Friends of Cyprus.

Villiers promised to carry on being “a strong voice” for Cyprus both in the House of Commons and in the cabinet. She added that a negotiated settlement of the Cyprus issue is in the interest of both communities in the island.

Having the Europe Minister next to her, she said that she would continue encouraging him and others in the government to engage “energetically and enthusiastically” in supporting the efforts to deliver a free and reunited Cyprus. She also noted that Cyprus has many friends in the British parliament.

In his short address Pincher recounted his first visit to Cyprus a few years ago, when he discovered how “friendly” the island was.

He disclosed that he is due to visit Cyprus again in a few weeks’ time with the focus of his meetings on making sure that Cypriots in the UK and Britons in Cyprus are reassured about their rights post-Brexit.

He also said that the bilateral relations need to be strong once the UK has left the EU and that means that the two countries will maintain and enhance trade, defence and cultural links.

Andreas Kakouris, the new High Commissioner of the Republic of Cyprus to the UK, noted that ties between the UK and Cyprus are “long-standing, historical and much more than skin deep.” He commented that these ties in various fields are getting “stronger and stronger”.

On the efforts to reach a settlement on the Cyprus issue, the Cypriot diplomat said that all the guests gathered there would like it to happen quickly, “but for the right reasons.” As he elaborated, that means the reunification of the island, an end to the Turkish occupation and a free and united Cyprus “with human rights for all its citizens embedded.”

He referred to President Anastasiades’ recent address to the UN General Assembly and particularly to his support for the Secretary General’s efforts to have the negotiating process stopped at Crans-Montana resumed.

Kakouris also highlighted the importance of the reunification of Cyprus for the wider “turbulent” region. As he commented, as a lighthouse of stability in the Eastern Mediterranean and trustworthy purveyor and not consumer of security, Cyprus tries to create conditions of peace and stability in the region through its trilateral synergies.

“We need also Turkey to be on board. But unfortunately, recent actions and statements and posture of Turkey, whether it is statements of inhabiting the fenced off Famagusta, Varosha or the gunboat diplomacy when it comes to our Exclusive Economic Zone, do not take us closer to negotiations but make it even more challenging,” the Cypriot High Commissioner said.

The Chairman of the Conservative Friends of Cyprus Jason Charalambous thanked the parliamentarians and all the guest and highlighted the importance that the UK and Cyprus hold for each other.

The reception was also attended by Conservative MPs Paul Scully and Martin Vickers, as well as councillors and other friends of Cyprus.