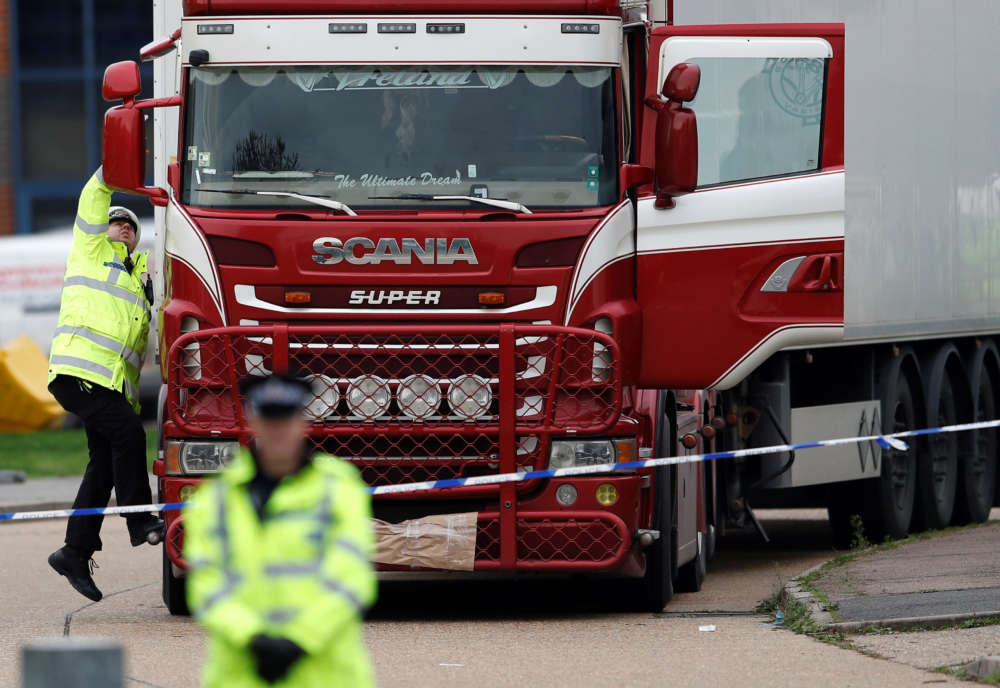 A British truck driver charged with the manslaughter of 39 Vietnamese nationals found dead in a truck near London last month pleaded guilty on Monday to plotting to assist unlawful immigration and to acquiring criminal property.

Appearing in court by video link from Belmarsh Prison in east London, Maurice Robinson, 25, from Northern Ireland, was not asked to enter a plea to 41 other charges, including 39 counts of manslaughter.

No trial date was set and Robinson is next due in court on Dec. 13.

The victims, 31 men and boys and eight women, were found on Oct. 23 on an industrial estate in Grays, Essex, not far from docks on the River Thames. The oldest of the victims was 44 while three were aged under 18, including two 15-year-old boys.

The discovery of the bodies has shone a spotlight on the illicit human smuggling trade that sees poor people from Asia, the Middle East and Africa make perilous journeys, often after paying huge sums to criminal gangs, to western Europe.

Most of the victims were from the provinces of Nghe An and Ha Tinh in north-central Vietnam, where poor job prospects and other factors all fuel migration.

Prosecutor William Emlyn Jones told Monday’s hearing at London’s Old Bailey criminal court that it was likely to be a large and complex case.

Robinson admitted to having conspired with others between May 1, 2018 and Oct. 24 this year to commit an offence of assisting unlawful immigration as well as acquiring cash which he knew or suspected came from criminal conduct.

Another man from Northern Ireland was charged on Sunday with helping to bring the 39 people to Britain illegally. The 23-year-old was due to appear at Chelmsford Magistrates’ Court in Essex on Monday.

Police in Vietnam have arrested 10 people there in connection with the deaths.

By In Cyprus
Previous articleMan jailed for six and half years for attempted murder of estranged wife
Next articleThieves grab jewels, treasures worth ‘up to a billion euros’ in Dresden