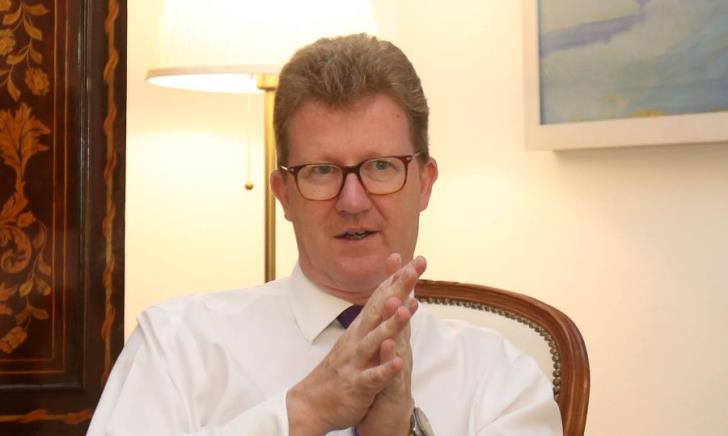 UK High Commissioner Stephen Lillie on Wednesday is meeting President Nicos Anastasiades to explain controversial statements about London’s initiative on divided Cyprus which provides for a decentralized federation with flexibility.

UN-brokered reunification talks throughout the years aim towards a federal bizonal bicommunal system in Cyprus, divided since a 1974 invasion by Turkey. Greece, Turkey and the UK are the Mediterranean island’s guarantor powers.

Nicosia has already strongly protested against London’s new initiative and Wednesday’s meeting will be a tete-a-tete between Lillie (photo) and the President who wondered why the UK is not applying the same system with Scotland.

Lillie’s statements which stirred a furor with political parties in Cyprus were made in an interview with Kathimerini on Sunday.

The British diplomat also said that attempts to resume the procedure on the Cyprus problem from where it left off in Crans-Montana in 2017 would be a recipe for long and fruitless discussions.

And that the parties could build on the body of work done to get to the Crans-Montana talks, as well as the six-point framework of UN secretary-general Antonio Gutteres.

Referring to the decentralized federation idea, he also said this was proposed by Anastasiades himself in the past. Something that the President has also dismissed saying his view on this was misinterpreted.