UK – Cyprus move to boost cooperation on research and innovation 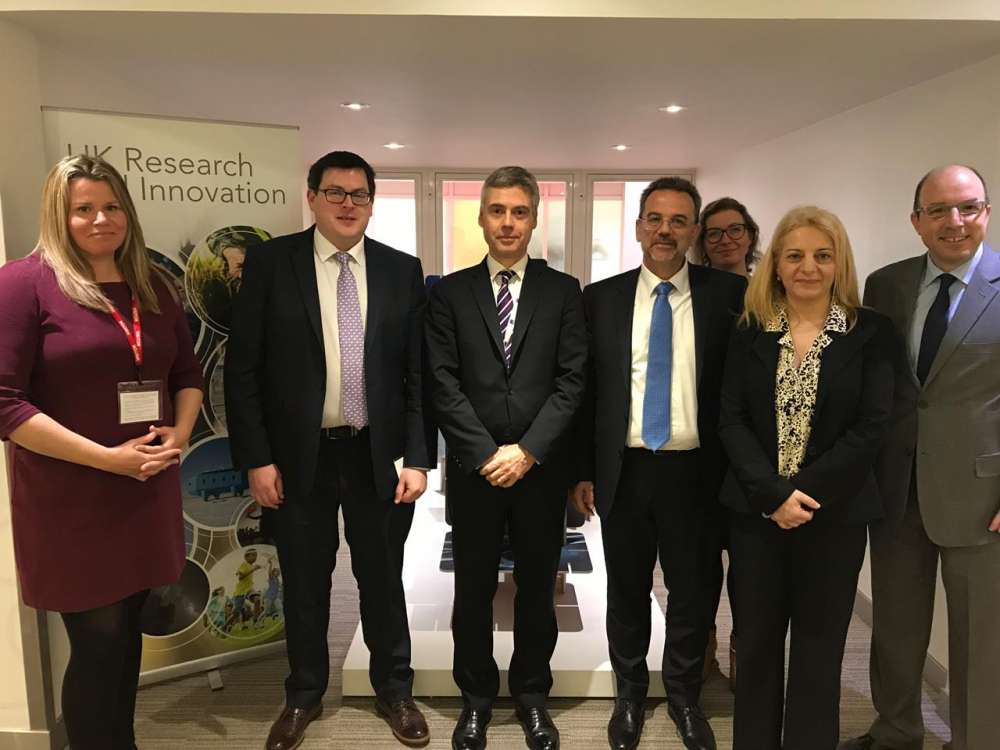 The British High Commission hosted a visit to London of Cyprus’ newly appointed Chief Scientist Kyriacos Kokkinos on March 6-7  in order to strengthen partnerships between the UK and Cyprus in research and innovation.

During the visit, Cypriot officials held meetings with the UK Government’s General Chief Scientific Adviser Sir Patrick Vallance, while they also visited the Department for Business, Energy & Industrial Strategy, the UK Research and Innovation, and met with representatives of the Foreign Office’s Science and Innovation Network, including Professor Carole Mundell, Chief Scientific Adviser of the Foreign & Commonwealth Office.

Furthermore, they visited Imperial College, the Parliamentary Office of Science and Technology, and the Cabinet Office of Digital Services, which leads on the UK’s digital transformation.

The two sides agreed to take specific initiatives to create mutually beneficial partnerships which will offer new development opportunities for the entrepreneurial innovation ecosystem. The visit gave the Cypriot delegation the opportunity to gain an insight into the governance of the UK’s research and innovation system and experience best practice in Britain, which is a world leader in the field.

Commenting on the visit, Kokkinos said it had two goals. “On one hand, to explore possibilities of deepening cooperation between our two countries on research and innovation, building on our multilevel partnerships in academia and research and on the other hand, to create new partnerships which will focus on common modern challenges like ageing population and climate change,” he said.

According to Kokkinos, these challenges can become fields of developing innovative solutions based on modern technologies like artificial intelligence.

Kokkinos added that “despite its small geographic size, Cyprus is not an ‘island’ but a bridge of cooperation between Europe and the Middle East in the fields of science, research and innovation.”

High Commissioner Stephen Lillie said that “This visit is an important milestone in further strengthening research and innovation ties with Cyprus, where we are already strong partners, but also structuring them in a more decisive way. The two biggest research projects in Cyprus (KIOS and RISE) are partnerships with UK institutions, and there are currently over 500 collaborative links between our countries via the Horizon 2020 programme. We are natural partners in research and innovation given our strong education links and similar institutional frameworks and we are keen to build on this in the future”.

It is worth noting that, the KIOS project for the development of a centre of excellence, is implemented within the context of the European Commission’s “TEAMING” Programme of the “HORIZON 2020” Framework Programme with a collaboration between the University of Cyprus and Imperial College. It is one of the biggest research and development projects in Cyprus, conducting cutting-edge multidisciplinary research and innovation in the area of Information and Communication Technologies (ICT) with an emphasis on the Monitoring, Control, Security and Management of Critical Infrastructure Systems.

University College London is a key partner in RISE (Research Centre on Interactive media, Smart systems and Emerging technologies), which is a project implemented within the aforementioned EC Programme, and which concerns the development of a centre of excellence in Cyprus, aiming to boost the innovation-led economy of the country and build Cyprus into a regional innovation hub.