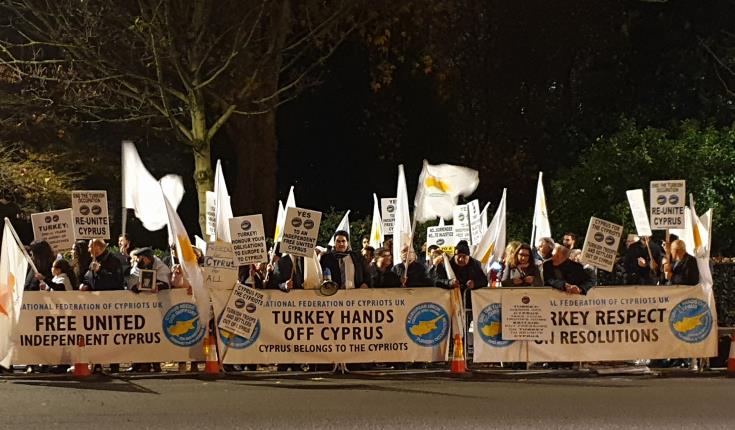 A large crowd of Cypriots living in London responded to the annual call by the National Federation of Cypriots in the UK for a protest outside the embassy of Turkey on Thursday evening, on the occasion of the 35th year since the UDI of the pseudo-state in occupied Cyprus.

A delegation of the Federation, headed by President Christos Karaolis left a letter at the door of the embassy, addressed to the Turkish Ambassador.

In the letter, on behalf of the Federation Karaolis  stressed Turkey’s obligations towards Cyprus under international law. He was also calling upon the Ankara government “to increase all efforts towards the creation of those conditions that will allow the negotiations to resume.”

The Federation President also addressed a letter to the UK Prime Minister Theresa May, noting that Turkey “holds the key to the reunification of Cyprus, yet opts to undermine reunification instead of supporting it.”

He impressed upon the Prime Minister the argument that Turkey needs to realise that “no solution is feasible if it continues to insist on maintaining the Treaty of Guarantee and the right of intervention, as well as permanent presence of troops on the island.”

He urged the British government to “make a significant and valuable contribution on this issue by publicly calling for the abolition of the Treaty of Guarantee.”