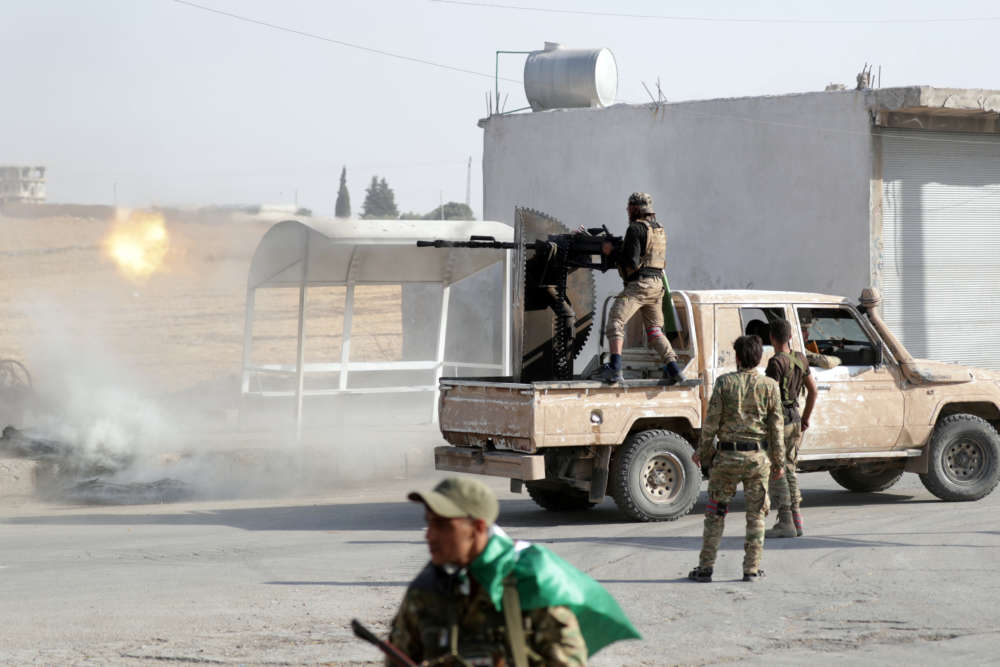 The United States said on Sunday it will withdraw its remaining 1,000 troops from northern Syria in the face of an expanding Turkish offensive while Syria’s army struck a deal with Kurdish forces to redeploy along its border with Turkey, both major victories for Syrian President Bashar al-Assad.

The developments illustrate Washington’s waning influence over events in Syria and the failure of the U.S. policy of keeping Assad from reasserting state authority over areas lost during the more than eight-year conflict with rebels trying to end his rule.

The developments also represent wins for Russia and Iran, which have backed Assad since 2011 when his violent effort to crush what began as peaceful protests against his family’s decades-long rule of Syria exploded into a full-blown civil war.

While the U.S. withdrawal moves American troops out of the line of fire, the return of Syrian soldiers to the Turkish border opens up the possibility of a wider conflagration should the Syrian army come in direct conflict with Turkish forces.

The Turkish onslaught in northern Syria has also raised the prospect that Islamic State militants and their families held by the Kurdish forces targeted by Turkey may escape – scores were said to have done so already – and permit the group’s revival.

The remarkable turn of events was set in motion a week ago when U.S. President Donald Trump decided to withdraw about 50 special operations forces from two outposts in northern Syria, a step widely seen as paving the way for Turkey to launch its week-long incursion against Kurdish militia in the region.

Turkey aims to neutralize the Kurdish YPG militia, the main element of Washington’s Kurdish-led ally, the Syrian Democratic Forces (SDF), which has been a key U.S. ally in dismantling the jihadist “caliphate” set up by Islamic State militants in Syria.

Ankara regards the YPG as a terrorist group aligned with Kurdish insurgents in Turkey.

Turkish President Tayyip Erdogan on Sunday said the offensive would extend from Kobani in the west to Hasaka in the east and extend some 30 km (19 miles) into Syrian territory, with the town of Ras al Ain now in Turkish control.

U.S. Defense Secretary Mike Esper said the United States decided to withdraw its roughly 1,000 troops in northern Syria – two U.S. officials told Reuters it could pull the bulk out in days – after learning of the deepening Turkish offensive.

It was unclear what would happen to the several hundred U.S. troops at the American military outpost of Tanf, near Syria’s southern border with Iraq and Jordan.

Another factor behind the decision, Esper indicated in an interview with the CBS program “Face the Nation,” was that the SDF aimed to make a deal with Russia and Syria to counter the Turkish onslaught. Several hours later, the Kurdish-led administration said it had struck just such an agreement for the Syrian army to deploy along the length of the border with Turkey to help repel Ankara’s offensive.

The deployment would help the SDF in countering “this aggression and liberating the areas that the Turkish army and mercenaries had entered,” it added, referring to Turkey-backed Syrian rebels, and would also allow for the liberation of other Syrian cities occupied by the Turkish army such as Afrin.

The fighting has sparked Western concerns that the SDF, holding large swathes of northern Syria once controlled by Islamic State, would be unable to keep thousands of jihadists in jail and tens of thousands of their family members in camps.

Erdogan dismissed the reports and told the state-run Anadolu news agency that accounts of escapes by Islamic State prisoners were “disinformation” aimed at provoking the West.

Trump, who has come under withering criticism for the U.S. withdrawal, including from his fellow Republicans, placed the onus on the Kurds and Turkey to restrain the Islamic State fighters and blamed European nations for not taking back their own citizens.

“Turkey and the Kurds must not let them escape. Europe should have taken them back,” Trump wrote on Twitter. “They will never come to, or be allowed in, the United States!”

An SDF official said clashes were going on along the road.

Turkey’s stated aim is to carve out a “safe zone” inside Syria to resettle many of the 3.6 million Syrian war refugees it is hosting. Erdogan has threatened to send them to Europe if the EU does not back his assault.

But the Turkish offensive has triggered international alarm over its large-scale displacements of civilians as well as U.S. domestic criticism that Trump has effectively abandoned the U.S. Kurdish allies. Trump argues that the United States should withdraw from “endless” Middle East wars and protect its own borders.

Turkey now faces threats of possible sanctions from the United States, a NATO ally, unless it calls off the incursion.

Two other NATO allies, Germany and France, have suspended arms exports to Turkey, and French President Emmanuel Macron was convening an emergency defense cabinet meeting on Sunday to discuss options regarding the offensive.

A U.S. State Department spokesman said Washington was studying “extremely troubling” reports that a Kurdish politician and captured Kurdish fighters were killed by Turkish proxy forces amid the offensive.

More than 130,000 people have been displaced from rural areas around Tel Abyad and Ras al Ain as a result of the fighting, the United Nations said.

The planned evacuation of U.S. forces came a week after Trump spoke by telephone with Erdogan and then abruptly shifted policy and withdrew about 50 U.S. troops deployed to support Kurdish forces in the campaign against Islamic State.

“In the last 24 hours, we learned that (the Turks) likely intend to extend their attack further south than originally planned, and to the west,” Esper said. “We also have learned in the last 24 hours that the … SDF are looking to cut a deal, if you will, with the Syrians and the Russians to counter-attack against the Turks in the north.”

Syrian state media reported that the Syrian army has begun deploying its troops to northern battlefronts to confront “Turkish aggression” on Syrian territory.

Esper called the situation “untenable” for U.S. forces, saying he spoke with Trump on Saturday night and that the president directed the U.S. military to “begin a deliberate withdrawal of forces from northern Syria”.

Erdogan told reporters that Turkish forces and their Syrian rebel allies had besieged Tel Abyad, a key border town west of Ras al Ain. They later advanced into the center of Tel Abyad where the situation was calm and they were conducting search operations, a Reuters witness said.