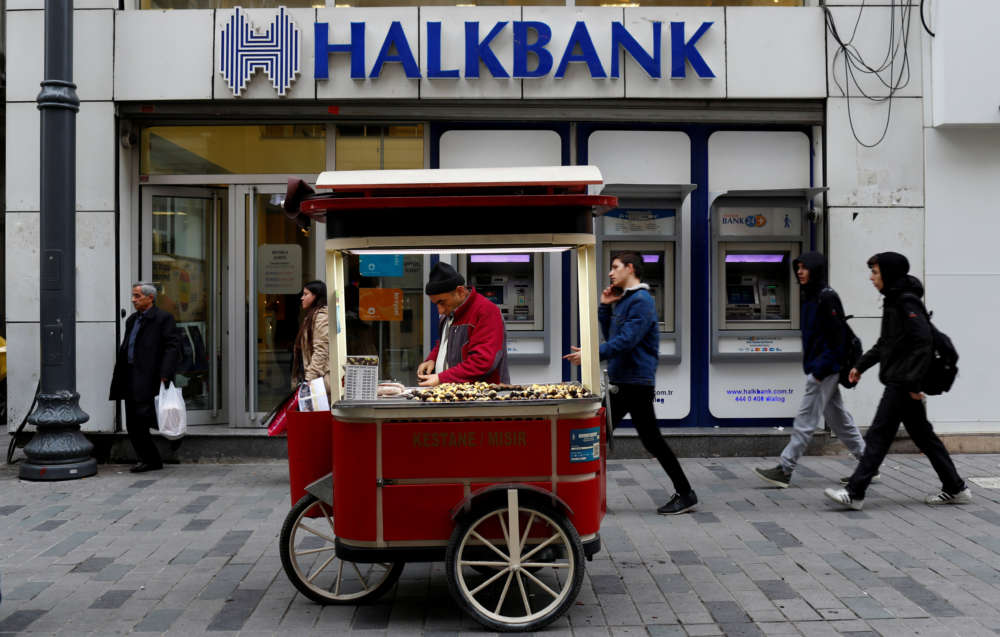 U.S. prosecutors on Tuesday charged Turkey’s majority state-owned Halkbank with taking part in a multibillion-dollar scheme to evade U.S. sanctions against Iran – an indictment that may complicate tension between NATO allies Washington and Ankara.

The charges unsealed in federal court in Manhattan mirror those against one of Halkbank‘s former executives, Mehmet Hakan Atilla, who was found guilty and sentenced to prison after a trial in the same court last year.

Halkbank spoke of an unprecedented legal overreach and said it would exert all its rights.

The United States and Turkey are at odds over Turkey’s military offensive into northeastern Syria against Kurdish-led militia. U.S. President Donald Trump announced a set of sanctions on Monday to punish Ankara for the invasion.

U.S. Vice President Mike Pence will meet with Turkish President Tayyip Erdogan in Ankara on Thursday to urge a ceasefire and emphasize the Trump administration’s commitment to sanctions until a resolution is reached, the White House said.

“This indictment constitutes an additional step that does not contribute positively to the current situation of U.S.- Turkey relations,” an official at the Turkish embassy in Washington told Reuters.

Turkey began its cross-border operation just days after Erdogan told Trump in a phone call on Oct. 6 that he would go ahead with a long-planned move against U.S.-allied Kurds in the region, opening a fresh front in Syria’s eight-year civil war.

Trump moved U.S. forces out of the way, an abrupt policy change after years of American troops fighting alongside the Kurd-led Syrian Democratic Forces against Islamic State.

Tuesday’s indictment is the latest development in a U.S. criminal case that first became public in 2016 with the arrest in Miami of Reza Zarrab, a Turkish-Iranian gold trader accused of playing a central role in the sanctions evasion scheme. Atilla, a Halkbank deputy general manager, was arrested in New York the following year.

Zarrab pleaded guilty and testified for U.S. prosecutors at Atilla’s trial. Zarrab said that Iran, with the help of Halkbank and Turkish government officials including Erdogan, used a complex web of shell companies and sham transactions in gold, food and medicine to get around U.S. sanctions.

U.S. prosecutors said some officials took bribes as part of the scheme.

The prosecutors are seeking to compel Halkbank to forfeit money and property, though they did not give a specific amount.

Atilla was sentenced to 32 months in prison following his conviction. He was released and returned to Turkey earlier this year. At the time of Atilla’s conviction, Erdogan condemned the case as a political attack on his government.

Gold trader Zarrab, before pleading guilty, hired Rudy Giuliani, a longtime associate of Trump, to try to negotiate a deal between the U.S. and Turkish governments to secure his release.

Giuliani has more recently attracted attention as Trump’s personal lawyer. Federal prosecutors are examining Giuliani’s interactions with two men he worked with in Ukraine who were arrested last week on campaign finance charges.

Giuliani also said on Tuesday that he would not cooperate with the Democratic-led U.S. House of Representatives impeachment inquiry into Republican Trump’s efforts to pressure Ukraine to investigate Democratic political rival Joe Biden.